Derivation of the relationship between prevalence, incidence and duration of a disease p/(1-p)=id 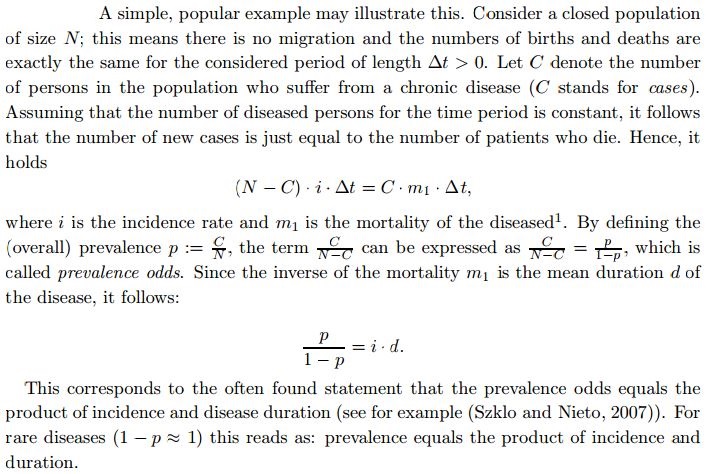 (Sourced from a paper)

I don't understand why 'the inverse of the mortality m1 is the mean duration d of the disease'.

This relation comes from the assumption, not explicitly stated in this excerpt but clear from the rest of the paper, that there is no path back from the diseased state to the normal state. That is, once an individual gets the disease the disease persists until death. Thus the sooner one dies after contracting the disease (higher mortality), the shorter the disease duration.

The author's simple first-order model is equivalent to a Poisson process with a constant risk of death for a diseased individual and with deaths independent among individuals. For this type of model, the mortality rate (say, deaths per year) is the inverse of the expected time to death (years per death) and thus of the expected disease duration if there is no "cure" for the disease except for death. That, unfortunately, is a reasonable assumption in the cited paper's application to dementia.

Not the answer you're looking for? Browse other questions tagged epidemiology or ask your own question.