Can I use the residuals of a multiple linear regression instead of the Predicted Value (y hat)?

I know this probably is a very newbie question, but I haven't been able to find anything about it elsewhere.

I'm running some OLS regressions on high frequency data of stocks in order to model some imbalances, all done in R and checked with Excel.

I tried this because of a mistake in the beginning of my coding and later found out it was a far better predictor in the out of sample analysis I ran. So I kept up testing and this kept showing up in the results.

The possible explanation I thought about this is that, if the residue is large enough, I should expect that the contrary of it to happen next. Like a mean reversal logic of the error. If the error is large enough, it will probably return to the mean, so I use it as the "- (Y hat)"

Is there some kind of explanation to this, is this some kind of statistical technique that I just don't know? Or I'm am I just delusional and this makes no sense at all, using the residuals as a predictor for my model? 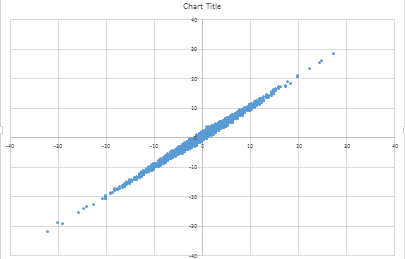 Error measures are based on residuals. If you denote $y$ as predicted variable and $\hat y$ as your estimate for it, then we define residuals as

So by predicting all zeros, you would conclude that they perfectly fit to any data (MAE = RMSE = 0). Small predictions would lead to small "errors" and vice versa. You can easily extrapolate this example to other cases.

If you say that this approach works for you in financial setting then this means that betting on random noise is better then being on predictions from your model. If regression assumptions are met then residuals are random around zero and there is no trend in them. So if this works then either you use regression for data that does not qualify for it, or your model is really poor.

Not the answer you're looking for? Browse other questions tagged multiple-regression forecasting least-squares prediction residuals or ask your own question.

30
What is the expected correlation between residual and the dependent variable?

10
What type of post-fit analysis of residuals do you use?
16
Is it at all defensible to stratify a data set by the size of the residual and do a two-sample comparison?
3
Non-normality of residuals in linear regression of very large sample in SPSS
2
residuals increases with fitted values : what kind of model misspecification might it indicate?
7
Homoscedasticity Assumption in Linear Regression vs. Concept of Studentized Residuals
1
How can I obtain a function that describes the expected value of data based on monthly data throughout different years?
9
Type of residuals to check linear regression assumptions