calculate likelihood with only one observation of data

I quote the whole related documents about Bayesian theory, and I am confused by a specific part "from the Bayesian viewpoint there is only a single data set D (namely the one that is actually observed)". My question is, suppose we have a few choices for values of parameter w, but we only have one observation of data set D, and if data set D is limited and bias, there is possible no co-existence of some possible value of w and D together, when how do we calculate in such case P(D|w)? Thanks.

For example, if we want to calculate P(D = win lottery | w = women) and in observed data set D, there is no data about women, how do we going to do? Treating it as zero posterior (P(w = woman| D = win lottery)) seems not very perfect? 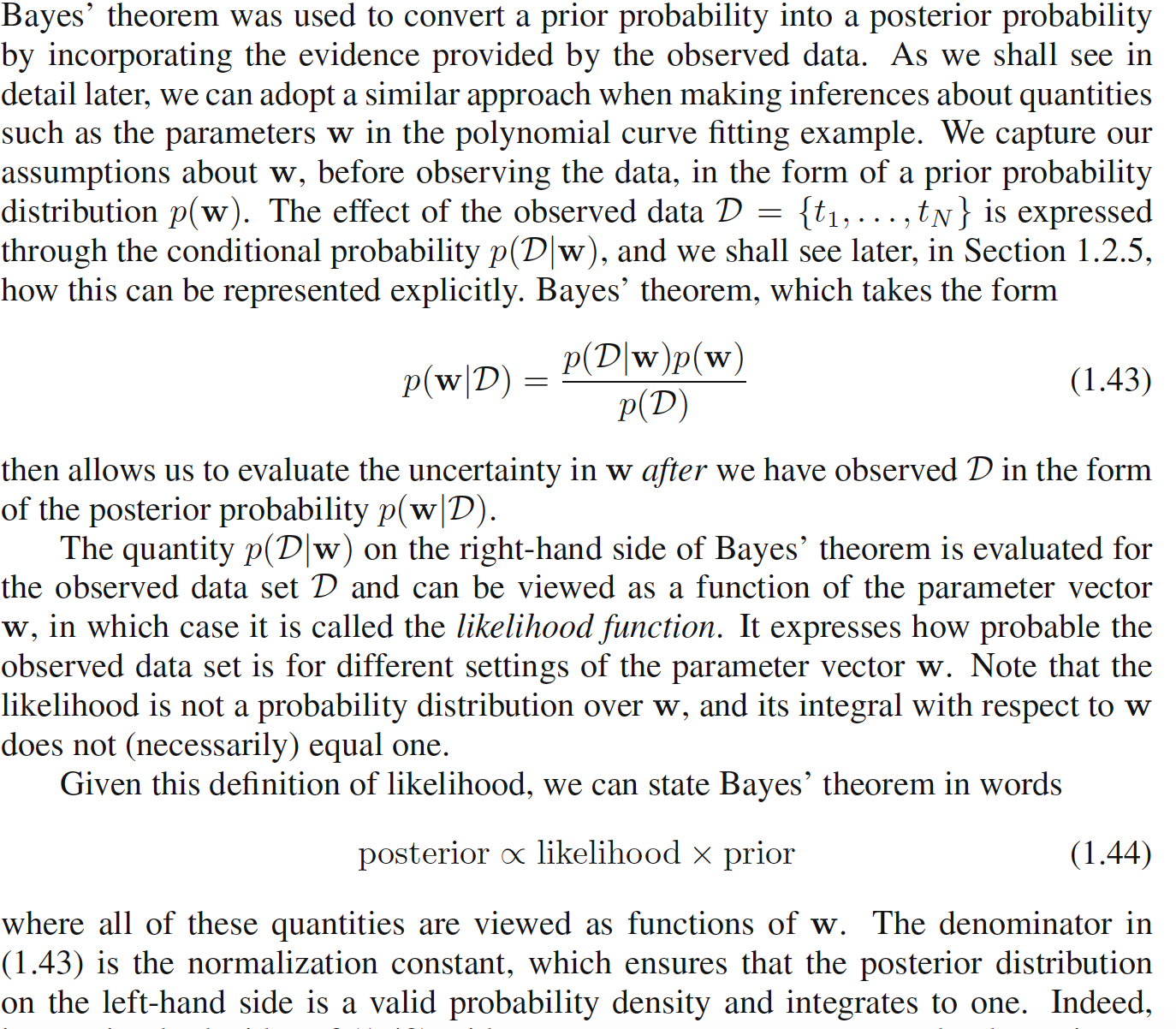 Using Bayes theorem is not the same as using Bayesian statistics. You are mixing two different things.

If you knew what is the conditional probability of person's gender given his luck in lottery $\Pr(\text{gender} \mid \text{win})$ and the unconditional probability distribution of winning $\Pr(\text{win})$, then you could apply Bayes theorem to compute $\Pr(\text{win} \mid \text{gender})$. Notice that I did not use anywhere here terms such as prior, likelihood, or posterior, since they have nothing to do with such problems. (You could use naive Bayes classifier for such problems, but first is is not Bayesian since it does not use priors, and second you have insufficient data for it.)

As your quote mentioned, in Bayesian approach we have prior, likelihood and posterior. Likelihood is a conditional distribution of data given some parameter. Prior is distribution of this parameter that you assume a priori before seeing the data. Posterior is the estimate given the data you have and your prior.

To give concrete example illustrating it, let's assume that you have data about some coin since you threw it once and observed a head, let's call it $X$. Obviously, $X$ follows Bernoulli distribution parametrized by some parameter $p$ that is unknown and we want to estimate it. We do not know what is $p$, but we have likelihood function $f(X \mid p)$, that is probability mass function of Bernoulli distribution over $X$ parametrized by $p$. To learn about $p$ Bayesian way, we assume prior for $p$. Since we have no clue what $p$ could be, we can decide to use weekly informative "uniform" Beta(1,1) prior. So out model becomes

where $\alpha = \beta = 1$ are parameters of beta distribution. Since beta is conjugate prior for Bernoulli distribution, we can easily compute the posterior distribution of $p$

and it's expected value

4
Why would considering $\theta$ to be a random variable not be 'Bayesian'?
1
How to do Bayesian updating for a simple practical problem?
2
How to compute the likelihood when uncertain about underlying distribution

13
If you use a point estimate that maximizes $P(x | \theta)$, what does that say about your philosophy? (frequentist or Bayesian or something else?)
0
Why need frequentist considered "a distribution of possible data sets D" in likelihood function p(D|w)?
6
How to calculate likelihood for a mixture model with missing data?
27
Is there any difference between Frequentist and Bayesian on the definition of Likelihood?
0
Probability of group wins in a lottery: Same versus different first digit in a lottery number drawn digit by digit
2
Is it not necessarily to put observed data at the right of the bar symbol $\mid$ when computing likelihood?
0
Likelihood of Poisson R.V with Bayesian Inference
0
Maximum likelihood observation with a constraint