Quoting from An Introduction to Statistical Learning with Applications in R (James, Witten, Hastie, Tibshirani), Chapter 3 on Linear Regression. I used numbered superscripts _1, _2, _3 to mark the areas where I have a corresponding question:

where $\sigma^2 = Var(\epsilon)$. For these formulas to be strictly valid, we need to assume that the errors $\epsilon_i$ for each observation are uncorrelated_1 with common variance $\sigma^2$. This is clearly not true in Figure 3.1_3, but the formula still turns out to be a good approximation.

For your reference, here is figure 3.1: 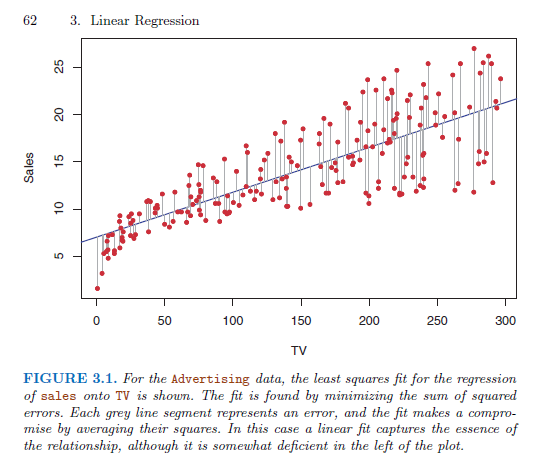 Questions and attempts at answers:

Q1: yes, this is talking about bias/dependence in the observations/errors. Those formulae only hold strictly true if the data is IID (independent and identically distributed). If there is bias then you have to apply a correction.

Q2: yes, although the convergence will slow as you approach zero.

Q3: "somewhat deficient in the left side of the plot" is referring to the fact that the errors are imbalanced about the linear regression line (greater number below, greater values above). An ideal (or at least very good) regression line will have a fairly balanced distribution of errors above and below it. The imbalance is a visual illustration of what you asked about in Q1: that the errors in this data are not IID.

A: They could be correlated by a measure in the background. For instance, your sample might have been influenced by the time when you took it; the sun standing in a particular position or whatever. Then you would obtain another result than by sampling the whole day (what you might have intended).

B: As there is no precise definition of the symbol, we cannot say for sure. However, the reference to the plot implies what the author meant: The variance should be constant at every position $x_{i}$ -> TVs in the plot.

Clearly yes. Also the distribution of the mean gets closer to the normal distribution. This and this may help to understand.

I referred to this in my answer to Q1 B.

Not the answer you're looking for? Browse other questions tagged regression self-study standard-error or ask your own question.