Now the model will fit the observed proportions in the data (that's how the coefficients are estimated), so you wouldn't think this should be a problem. However, models usually have constraints relative to the data. That doesn't have to be the case: consider a one-way ANOVA-ish logistic regression that compares the probability of success associated with three nominal categories. In such a case there can be no lack of fit; the model's predicted probabilities will exactly equal the observed proportions in the three conditions. But imagine a slightly more complicated two-way ANOVA-ish logistic regression where those three conditions are crossed with a second, dichotomous factor. If a model with two factors, but no interaction, is fit, the coefficients are constrained such that the predicted probabilities for $Aa$ and $Ab$, $Ba$ and $Bb$, and $Ca$ and $Cb$ must be a constant shift (on the log odds scale). That may not be correct: an interaction term may be needed. If an interaction term is included in the model, no lack of fit is possible (although it may not be necessary), but when an interaction is not included, lack of fit could occur. You can see an example of this in my answer here: Test logistic regression model using residual deviance and degrees of freedom.

Nominal covariates constitute the the simplest case, but other possibilities exist. When the covariates are continuous, the functional relationship can differ from that specified by the model. There are various ways this can occur:

Basically you are asking how can we check the logistic regression model is "under-fitting" / has high "bias".

This is a very reasonable question for logistic regression. This is because it is a linear model that usually has high "bias" and could suffer from "under-fitting".

One way to check if the model is "under-fitting" or "over-fitting" is plot "learning curve".

Details can be found in my answer here

How to know if a learning curve from SVM model suffers from bias or variance?

Here are two examples of under fitting and over fitting. 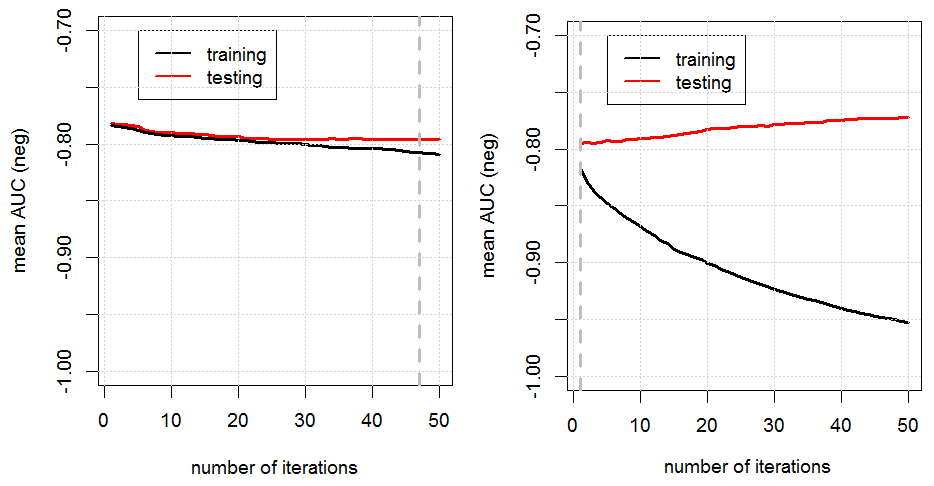 Back to your question, if you plot learning curve and found the model has high bias, i.e, two curves are close and both has "low performance", then it is "lack of fit".

Not the answer you're looking for? Browse other questions tagged regression logistic modeling goodness-of-fit logit .

0
Evaluating goodness of fit for Bernoulli glm
352
Difference between logit and probit models
133
What is the difference between linear regression and logistic regression?
7
How to use boxplots to find the point where values are more likely to come from different conditions?
13
How to know if a learning curve from SVM model suffers from bias or variance?
8
Test logistic regression model using residual deviance and degrees of freedom
2
GLM weights vs. identical observations
1
Is my overdispersion too large in this quasibinomial model?