Something more powerful than Kruskal-Wallis Test?

I have a sample from a continuous variable under 3 treatments and I want to assess treatment differences in the location of the underlying distributions.

One option is to run a non-parametric test such as the Kruskal-Wallis (kruskal.test in R).

Wondering whether there are different non-parametric tests that I can use.

I think the issue you're having is both one of sample size and the nature of the alternative hypothesis for the particular test you're using. The Kruskal-Wallis test tries to determine if the distributions are equal, or if one stochastically dominates another. This means that the probability that one quantity is larger than $t$ is greater than that of another distribution for every $t$ (or less precisely the probability that one quantity is "big" is larger than another). The point is that the Kruskal-Wallis test isn't sensitive to any differences whatsoever between the distributions.

If we take your example and plot the empirical distribution functions we will see that the times when the test rejects roughly coincide with the cases where the empirical distribution functions don't overlap. If you're interested not just in stochastic domination but differences in shape as well, you might consider a $k$-sample Kolmogorov-Smirnov test which is discussed in this post: Is there a multiple-sample version or alternative to the Kolmogorov-Smirnov Test?. 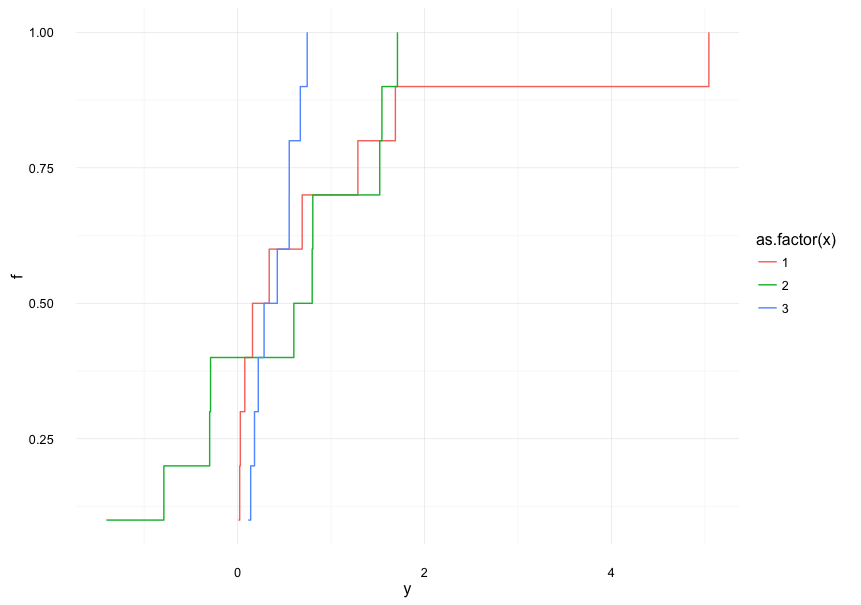 (A little less formal that dsaxton's analysis... but a quick way to judge in this case)

It's not at all clear to me that these are different:

For a rough pairwise comparison, at sample size 10, the uncertainty in the median (since we're looking at boxplots here) is about the size that if the boxes overlap, the two aren't significantly different (though it depends partly on the relative spreads).

[Where does this "at n=10 see if the boxes overlap" idea come from? See the analysis here and then note the neat coincidence that $1.58$ is almost exactly $\sqrt{10}/2$, which means that, at least when the median is toward the middle of the box, the problem reduces to checking for overlapping boxes. I noticed this back in the 80s and it's a rule of thumb that's come in pretty handy. It's not hard to adjust for other sample sizes from there -- e.g. if n is 40, the complete notch interval will be half a box-width]

As we see here, the boxes for groups 1 and 3 overlap almost completely (in that the interval for group 3 is almost entirely contained in that for group 1), and group 2 just overlaps group 3, while groups 1 and 2 just fail to overlap.

So at least looking at the information from the boxplots alone, I see little reason to think there's necessarily anything different here -- far from being obvious, this is pretty equivocal evidence of a difference.

(In fact if you look at notched boxplots, all the pairwise notch intervals overlap substantially.)

So if I were to guess just from the boxplot, I'd think that Kruskal-Wallis test would perhaps be around the border of rejection at the 5% level, but I wouldn't actually expect it to reject. (It might, depending on the specifics of the sample -- it doesn't quite do the same thing as comparing boxplots -- but we really shouldn't be surprised if it doesn't)

So it's not that the Kruskal-Wallis is missing anything here -- I'd say your judgement about what would "appear quite different" (as you put it in the original post) is miscalibrated for this small sample size. The indication of location difference is simply not clear in the data.

If you're interested in more general differences than location differences (such as differences in spread or shape), you might consider other tests than this one... but with an even broader class of alternatives at n=10 you generally won't be able to say much.

Not the answer you're looking for? Browse other questions tagged hypothesis-testing statistical-significance statistical-power kruskal-wallis-test or ask your own question.

16
Is there a multiple-sample version or alternative to the Kolmogorov-Smirnov Test?
13
Reading box-and-whisker plots: possible to glean significant differences between groups?
12
Box plot notches vs. Tukey-Kramer interval
0
Interpretation of boxplot overlaps

6
Which non-parametric test can I use to identify significant interactions of independent variables?
4
Why am I getting inconsistent results from Wilcoxon signed rank test and Kruskal-Wallis test?
4
How to plot the results of a Kruskal-Wallis or a Welch's ANOVA?