How do know whether average ratings are a good predictor of my ratings for a product?

I have a small dataset that contains names of books, their average Goodreads ratings and the ratings I have given them. I want to know whether the average rating of a book is a good predictor of the rating I will give the same book. Here's a small sample of the data:

How do I know whether Average.Rating is a good predictor of My.Rating? I tried the cor function in R and the correlation I got was 0.1970633.

What I understand from this result is that the predictive power of a Goodreads rating is negligible. It follows that I might have a similar outcome if I had randomly picked books from a bookstore.

However, I do not feel that Goodreads ratings are as unreliable as the correlation seems to suggest. In fact, I feel that most books that have a high rating are those I have personally liked as well. Also, I intuit that selecting books based on genre and the average rating is a much better approach than randomly picking up books from a bookstore or library.

Here's the scatter plot of my data: 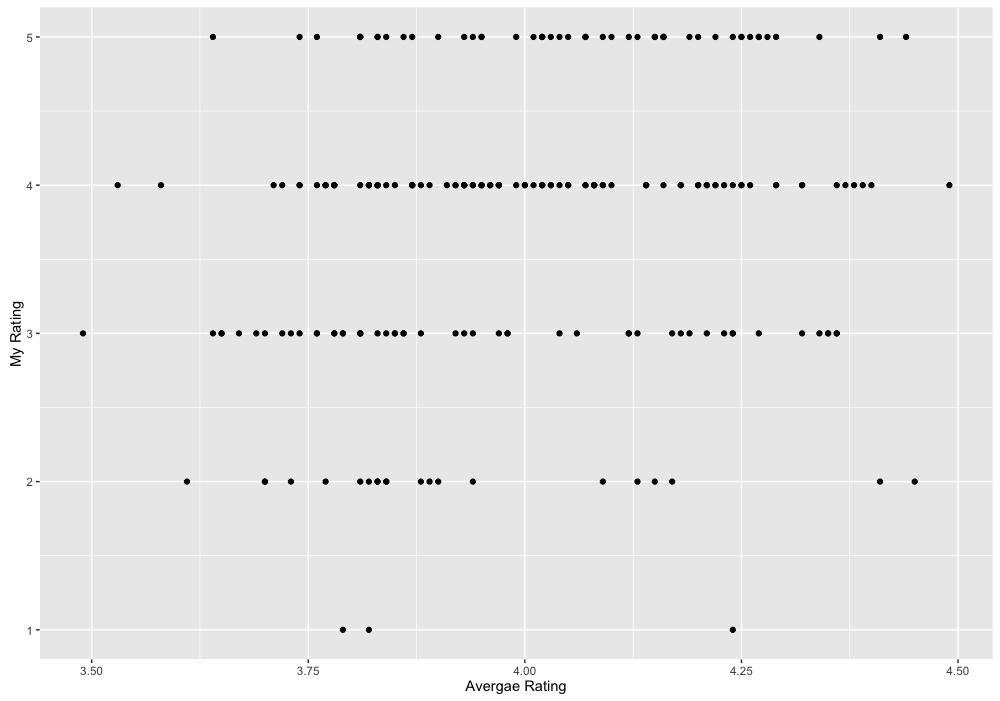 This is result that cor.test gives me:

EDIT: after thinking this through a bit more, I'm convinced you don't actually need ordinal regression. See below for the reason why.

The scatterplot clearly shows a nonlinear relationship. This was to be expected, because the predictor (the X) is a continuous variable (Average.Rating) while the response is ordinal (My.Rating). A piecewise constant function is of course not linear. In this case, Spearman rank correlation would be a more adequate measure of correlation, than Pearson correlation coefficient. Anyway, you are right in your intuition that there's a connection between Average.Rating and My.Rating (the correlation test rejects the hypothesis of a null correlation coefficient), but the correlation is weak because of large variability. In other words, for a given My.Rating, the scatterplot shows clearly that there are both books with very high Average.Rating and books with very low Average.Rating. We can also see this numerically with 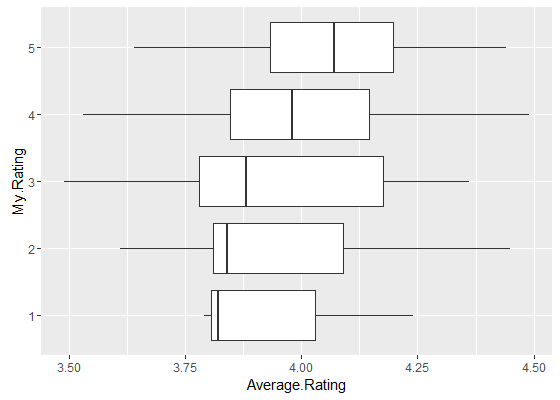 the boxplot shows clearly that, as the median of Average.Rating increases, My.Rating also increases, however there is a large dispersion among this median value. This is why you cannot get a good (accurate) regression of My.Rating over Average.Rating, whether you use ordinal regression or not. Another interesting point is that you don't have really low Average.Ratings (the minimum is 3.49), while you do have very low My.Ratings. This is in part due to the smoothing effect of the mean.

To get better results you need to add predictors, which should be correlated with your response, and possibly not too correlated among themselves. After having the possibility to look at your data, I don't think you can do much better unless you collect more data. You have a classification (the Bookshelves variable) for some books (not all), but some books belong to more than one category. You could try creating extra columns for each category, i.e., fiction, humor, etc., and for each book you would put a 1 (or a TRUE) if the book belongs to category $j$, otherwise leave a 0 (or FALSE). Then you could check if these extra variables help predicting My.Rating. This is the "simplest" improvement you can try with the data at hand. However, I think that you would have better luck if you could collect more data, because your real problem is that by aggregating all the reviews in a single number (the average rating), you throw away precious information, and you hemorrhage statistical power. Two possible roads:

Looking at your scatterplot (which is very helpful in my view), I would argue, you are not missing anything. The average rating in Goodreads is not very informative about your own rating of a book. Your sample size is with 221 observations not too small and there are books you like with high as well as low average ratings all across the board.

Of course you could do some analyses which takes into account the ordinal nature such as an ordinal regression of your own rating variable which takes only values in the set $\{1,2,3,4,5\}$ but that will not change much. Perhaps there are only few books with a high average Goodreads which you rate very badly, but I think this is a dead end.

If you care more about certain books than others, i.e. if you would be very sorry to not read those books, you could try to add weights, marking important books and see if both ratings give more similar results in this case? But this is of course an additional complexity.

I intuit that selecting books based on genre and the average rating is a much better approach than randomly picking up books from a bookstore or library.

This is an interesting question and we cannot answer it using the data at hand (because the books, and perhaps the ratings, in your Goodreads have not been randomly drawn/selected). If you want to be sure, try an experiment: Just randomly select and read 20 books or so (e.g. collect a large number of for example of ISBN numbers of novels and use a random generator such as the sample() function in R). Give am a rating and do not look at Goodreads before you rate the book; then look at the correlation of your rating and the Goodreads rating for those randomly selected books. Of course, come back to us and tell us whether this changed your experience regarding the Goodreads ratings! In this case, it is not primarily a statistical issue but a "problem" of non-random samples and human behavior :-)

PS: And I completely agree with DeltaIV very good comment that I would take a look if many average Goodreads ratings are based on (very) observations/ratings.

Not the answer you're looking for? Browse other questions tagged r correlation predictor or ask your own question.