I have paired data, but repeated observations, which make the data to be paired with dependent observations. I read Wilcoxon signed rank test assumes the observations are independent.

For example, in the data below, where the same dataset was processed with two different programming languages, having dependent data but not independent observations. My confusion is, Wilcoxon seems to be correct to use here, only if my data was not replicated. Am I right? Which test should I use with dependent samples and dependent observations? 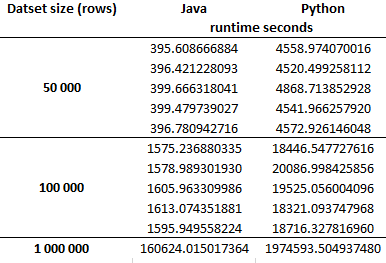 You can think of your data as blocked, or being a two-factor experiment where one factor is a nuisance. These are repeated measures, but they are not paired because the blocks aren't of size $2$. Taking, for example, the data that come from the java code run on a given dataset of 50,000, you have $5$ repeated measures. These are matched to another $5$ repeated measures from the Python code, in the sense that the codes were run on the same dataset. A matched pair would be $1$ datum that corresponds to $1$ datum. You have $5$ data that correspond to $5$ data. Two matched sets of size $5$ each aren't a 'pair'.

The question of whether you should make parametric assumptions (like normality) is well addressed in this great CV thread: How to choose between t-test or non-parametric test e.g. Wilcoxon in small samples. If you wanted to use a nonparametric approach, you could use an ordinal logistic regression (cf., What is the non-parametric equivalent of a two-way ANOVA that can include interactions?). If you wanted the parametric equivalent, you could run a standard two-way ANOVA. The ordinal model is probably safer, but it won't matter with your data either way, since the effect is so large.

On a different note, let me address some of the misunderstandings in the question. There are two tests that are sometimes called 'the Wilcoxon test': the Wilcoxon rank sum test, and the Wilcoxon signed rank test. The former is for two independent samples, and is also called the Mann-Whitney U-test. The latter is for two dependent samples. Neither requires that your data are normally distributed. If your data were paired (e.g., if you ran each dataset only once with each software), then you could use the Wilcoxon signed rank test. The complication here is that you don't have paired data.

There's no need for any hypothesis testing here. You can see that there's a significant magnitude difference between the Java and Python performance.

Here, I assume you're interested in the difference between Java and Python in terms of execution time. I think you should consider paired t-test for each block (data size).

If you want to include all data into a single model, you'll need to use ANCOVA one-way repeated measure.

PS: It's not essential to do statistical testing here because you know the results will be significant and the p-value will be very small.

Not the answer you're looking for? Browse other questions tagged hypothesis-testing non-independent or ask your own question.

119
How to choose between t-test or non-parametric test e.g. Wilcoxon in small samples
26
What is the non-parametric equivalent of a two-way ANOVA that can include interactions?