This is probably a trivial question, but my search has been fruitless so far, including this wikipedia article, and the "Compendium of Distributions" document.

If $X$ has a uniform distribution, does it mean that $e^X$ follows an exponential distribution?

This is not a uniform. (Indeed $-V$ is a Gumbel-distributed random variable, so you might call the distribution of $V$ a 'flipped Gumbel'.)

We could also simulate, and again see it right away: 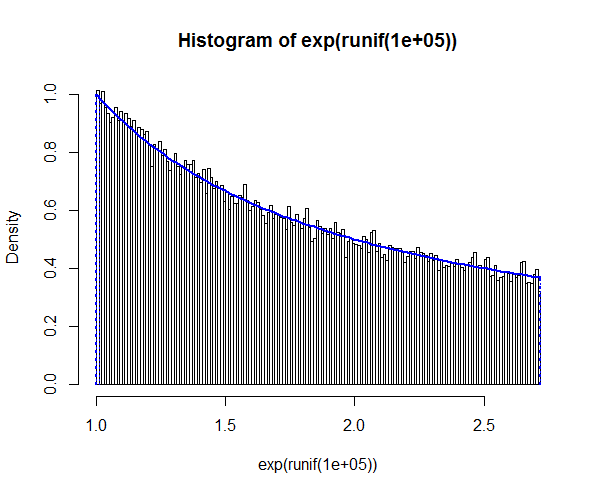 [the blue curve is the density (1/x on the indicated interval) we worked out above...] 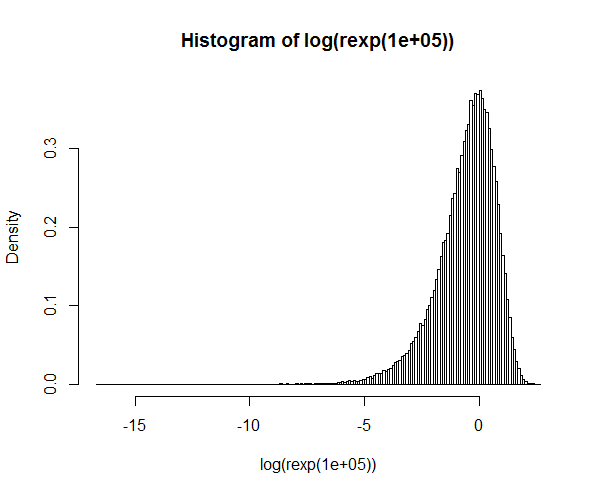 Which we can see is far from uniform! (If we differentiate the cdf we worked out before, which would give the density, it matches the shape we see here.)

This method tells us that if $U=F_Y(Y)$, $Y = F^{-1}(U)$. If we apply the inverse of the cdf as a transformation on $U$, a standard uniform, the resulting random variable has distribution function $F_Y$.

You almost have it back to front. You asked:

More generally you could say:

Not the answer you're looking for? Browse other questions tagged distributions data-transformation exponential-distribution uniform-distribution or ask your own question.

0
Statistical Inference Casella & Berger Exercise 7.11
1
How to use the exponential distribution to generate samples from the chi-square and beta distributions?