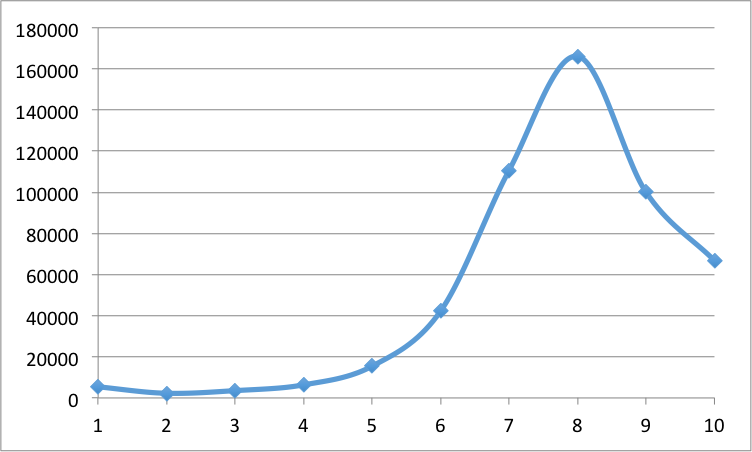 And a bimodal shape: 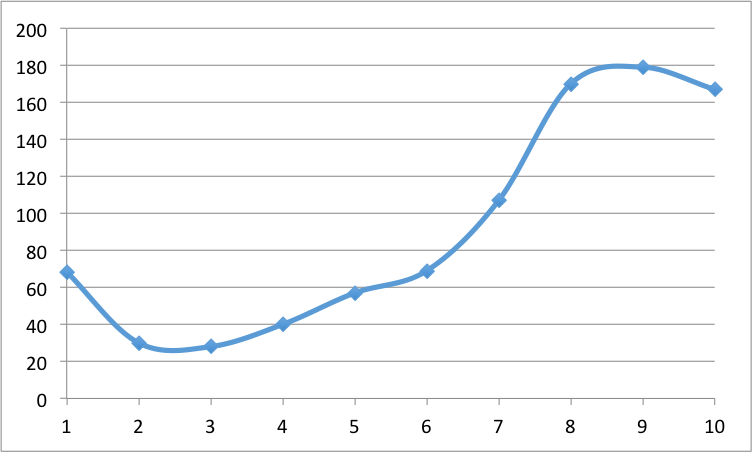 Obviously, the above two distributions exhibit very different shapes. And, as you can see, some of the datasets are very large, containing tens or hundreds of thousands of values.

The discrete nature of the datasets is somewhat problematic because the most common test for unimodality, the Hartigan-Hartigan Dip test, assumes a continuous distribution. I am not a statistician, but it appears as if this is a rather rigid assumption. I tested an R implementation of the Dip test on what appeared to be some (artificial) perfectly unimodal discrete data and detected an incredibly small p-value, suggesting that the data was actually multimodal.

The two other commonly mentioned tests for unimodality appear to be the Silverman test and the excess mass test. I know little about the latter, but this explanation of the former seemed to hint that the Silverman test applies to discrete data, although it was not said explicitly.

1) Am I thinking about this in the right way? Is "unimodality" the correct term here?

2) What is/are the best statistical test(s) to use for my data? Is the Silverman test an appropriate choice?

3) As I am not a statistician, where, if possible, might I find an already working implementation of the above statistical test (ideally Python or R)?

The implication of the question is that these datasets tabulate counts of values drawn independently from a discrete distribution defined on an ordered set of values such as $1,2,\ldots, 10.$ When that is the case, these counts have a multinomial distribution.

Carrying out the bootstrapping is easy: write a function to compute the number of modes in a graph and another one to repeatedly sample from the graph's data and apply that function to the sample. Tabulate its results. ExampleR code is below. When given a dataset like the second one in the question, it plots this chart of the bootstrapped mode frequencies: 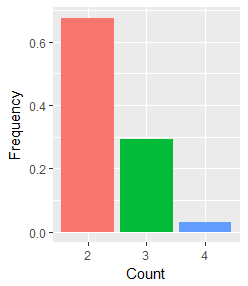 In 676 of 1000 bootstrap samples there were two modes; in 293 there were three; and in 31 there were four. This indicates the data are consistent with an underlying distribution with two or perhaps three modes. There is some possibility of four. The likelihood of more than four is tiny.

These results intuitively make sense, because in the dataset the frequencies of the values $8,9,10$ were close and relatively small. It is possible the true frequency of $9$ is less than those of either $8$ or $10,$ causing there to be modes at $1,8,$ and $10.$ The bootstrapping gives us a sense of how much variation in modes is likely based on the random variation implied by the assumed sampling scheme.

The results for the first set of data are always two modes. That is because the variation among counts in the thousands or tens of thousands is so small that it is extremely unlikely these data came from a distribution with any other modes besides the obvious ones at $1$ and $8.$

You could try sampling() from density() with a large bin width or using binsmooth and sampling from the function. Or just add runif(n,min=-.5,max=.5) to your data. Difference between max and min is the size of your bins.

In other words at significance of .01, test rejects all but 1% of uniform distribution but misses 25% of multimodal. I conclusion it works but not super great.

Not the answer you're looking for? Browse other questions tagged r distributions statistical-significance mode or ask your own question.