What is the difference between convolutional neural networks and deep learning?

I want to use deep learning in my project. I went through a couple of papers and a question occurred to me: is there any difference between convolution neural network and deep learning? Are these things the same or do they have any major differences, and which is better?

Deep Learning is the branch of Machine Learning based on Deep Neural Networks (DNNs), meaning neural networks with at the very least 3 or 4 layers (including the input and output layers). But for some people (especially non-technical), any neural net qualifies as Deep Learning, regardless of its depth. And others consider a 10-layer neural net as shallow.

Convolutional Neural Networks (CNNs) are one of the most popular neural network architectures. They are extremely successful at image processing, but also for many other tasks (such as speech recognition, natural language processing, and more). The state of the art CNNs are pretty deep (dozens of layers at least), so they are part of Deep Learning. But you can build a shallow CNN for a simple task, in which case it's not (really) Deep Learning.

But CNNs are not alone, there are many other neural network architectures out there, including Recurrent Neural Networks (RNN), Autoencoders, Transformers, Deep Belief Nets (DBN = a stack of Restricted Boltzmann Machines, RBM), and more. They can be shallow or deep. Note: even shallow RNNs can be considered part of Deep Learning since training them requires unrolling them through time, resulting in a deep net.

Within the fields of adaptive signal processing / machine learning, deep learning (DL) is a particular methodology in which we can train machines complex representations.

Generally, they will have a formulation that can map your input $\mathbf{x}$, all the way to the target objective, $\mathbf{y}$, via a series of hierarchically stacked (this is where the 'deep' comes from) operations. Those operations are typically linear operations/projections ($W_i$), followed by a non-linearities ($f_i$), like so:

An MLP is perhaps one of the most traditional types of DL architectures one may find, and that's when every element of a previous layer, is connected to every element of the next layer. It looks like this:

MLPs fell out of favor then, in part because they were hard to train. While there are many reasons for that hardship, one of them was also because their dense connections didnt allow them to scale easily for various computer vision problems. In other words, they did not have translation-equivariance baked in. This meant that if there was a signal in one part of the image that they needed to be sensitive to, they would need to re-learn how to be sensitive to it if that signal moved around. This wasted the capacity of the net, and so training became hard.

This is where CNNs came in! Here is what one looks like:

CNNs solved the signal-translation problem, because they would convolve each input signal with a detector, (kernel), and thus be sensitive to the same feature, but this time everywhere. In that case, our equation still looks the same, but the weight matricies $\mathbf{W_i}$ are actually convolutional toeplitz matricies. The math is the same though.

It is common to see "CNNs" refer to nets where we have convolutional layers throughout the net, and MLPs at the very end, so that is one caveat to be aware of.

This slide by Yann LeCun makes the point that only models with a feature hierarchy (lower-level features are learned at one layer of a model, and then those features are combined at the next level) are deep.

A CNN can be deep or shallow; which is the case depends on whether it follows this "feature hierarchy" construction because certain neural networks, including 2-layer models, are not deep. 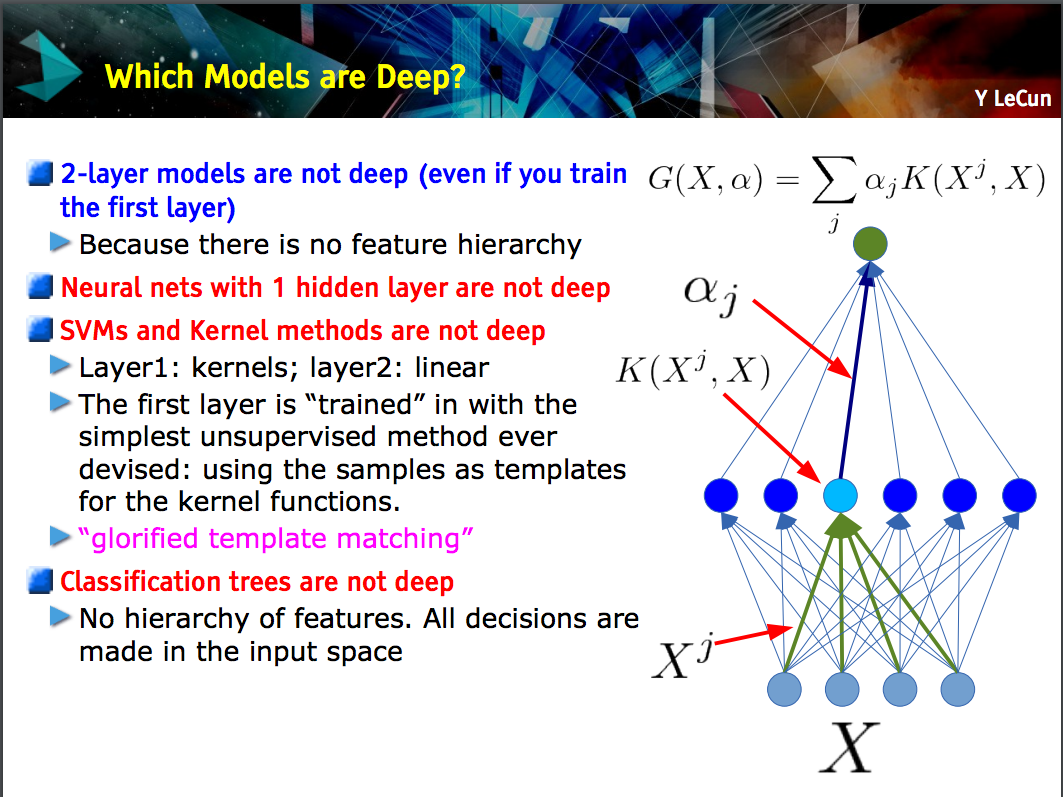 Deep learning is a general term for dealing with a complicated neural network with multiple layers. There is no standard definition of what exactly is deep. Usually, you can think a deep network is something that is too big for your laptop and PC to train. The data set would be so huge that you can't fit it into your memory. You might need GPU to speed up your training.

Deep is more like a marketing term to make something sounds more professional than otherwise.

CNN is a type of deep neural network, and there are many other types. CNNs are popular because they have very useful applications to image recognition.

Not the answer you're looking for? Browse other questions tagged machine-learning neural-networks deep-learning terminology conv-neural-network or ask your own question.