This is my scenario:

In order to have a general idea about which one is better I thought that a t-test would be ok (tell me if not): I put all the errors of Device A together and compare them with B.

If I want to compare A vs B of each one of the 15 measurements would it be ok to do a one way ANOVA? I'm asking it because I have only two groups.

If you just want to compare the differences between the two groups than a hypothesis test like a t-test or a Wilcoxon test is the most convenient way. There are some differences between statistical tests regarding small sample properties and how they deal with different variances. For reasons of simplicity I propose a simple t-test (welche two sample t-test).

Let´s have a look a two vectors. The first vector is called "a".

The second vector is called "b".

So you can use the following R command for testing.

One-way ANOVA however is applicable if you want to compare means of three or more samples. As you have only two samples you should not use a one-way ANOVA.

Following extensive discussion in the comments with the OP, this approach is likely inappropriate in this specific case, but I'll keep it here as it may be of some use in the more general case

With your data you have three different measurements:

First, you have the "reference" measurement, i.e. the thing you are interested in measuring. For simplicity's sake, let us assume that this is known without error.

Second, you have the measurement taken from Device A. This is a measurement of the reference object which has some error.

Third, you have the measurement taken from Device B. Again, this is a measurement of the reference object which has some error (which may be more or less than the error with Device A).

The error associated with both measurement devices ensures that there will be variance in both sets of measurements. Furthermore, as you have a range of reference values (i.e., you didn't just measure the same thing multiple times) you'll have some variance in the reference measurement.

For a specific sample, the device with the largest correlation coefficient (i.e., closest to 1), will be the less errorful device.

As an illustration, I'll set up data for two measurement devices. One which is more errorful than the other 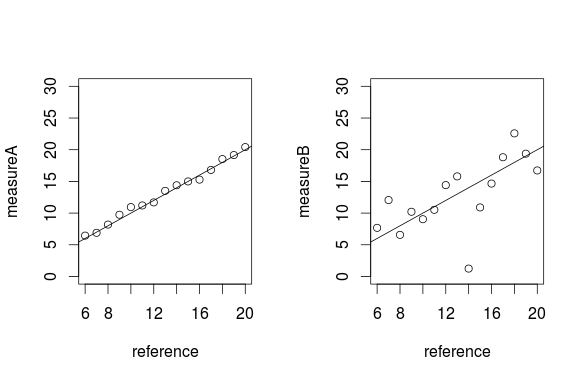 It should hopefully be clear here that there is more error associated with device B.

Now, we can calculate correlation coefficients for each device compared to the reference

Note that the device with more error has a smaller correlation coefficient than the one with less error.

Of course, you may want to know whether the difference between correlation coefficients is statistically significant. This question may give you some help in that direction, although with only 15 observations the differences in reliability between the two devices may need to be large before you get a significant $p$-value.

For this approach, it won't matter whether the two devices are measuring on the same scale as the correlation coefficient is standardised.

Not the answer you're looking for? Browse other questions tagged hypothesis-testing anova t-test multiple-comparisons or ask your own question.

13
How to compare the strength of two Pearson correlations?

3
Comparing means between two groups over three time points
3
Should I use ANOVA or MANOVA for repeated measures experiment with two groups and several DVs?
4
Comparing the mean difference between data measured by different equipment, t-test suitable?
3
How to test whether matched pairs have mean difference of 0?
1
How to Compare Two Algorithms with Multiple Datasets and Multiple Runs
0
Paired t-test with multiple measurements per pair