Functional principal component analysis (FPCA): what is it all about?

Functional principal component analysis (FPCA) is something I have stumbled upon and never got to understand. What is it all about?

See "A survey of functional principal component analysis" by Shang, 2011, and I'm citing:

PCA runs into serious difficulties in analyzing functional data because of the “curse of dimensionality” (Bellman 1961). The “curse of dimensionality” originates from data sparsity in high-dimensional space. Even if the geometric properties of PCA remain valid, and even if numerical techniques deliver stable results, the sample covariance matrix is sometimes a poor estimate of the population covariance matrix. To overcome this difficulty, FPCA provides a much more informative way of examining the sample covariance structure than PCA [...]

I just don't get it. What is the drawback this paper is describing? Isn't PCA supposed to be the ultimate method to handle situations like the “curse of dimensionality”?

Exactly, as you state in the question and as @tdc puts in his answer, in case of extremely high dimensions even if the geometric properties of PCA remain valid, the covariance matrix is no longer a good estimate of the real population covariance.

There's a very interesting paper "Functional Principal Component Analysis of fMRI Data" (pdf) where they use functional PCA to visualize the variance:

...As in other explorative techniques, the objective is that of providing an initial assessment that will give the data a chance “to speak for themselves” before an appropriate model is chosen. [...]

In the paper they explain how exactly they've done it, and also provide theoretical reasoning:

The decisive advantage of this approach consists in the possibility of specifying a set of assumptions in the choice of the basis function set and in the error functional minimized by the fit. These assumptions will be weaker than the speciﬁcation of a predeﬁned hemodynamic function and a set of events or conditions as in F-masking, thus preserving the exploratory character of the procedure; however, the assumptions might remain stringent enough to overcome the difﬁculties of ordinary PCA.

I find "functional PCA" an unnecessarily confusing notion. It is not a separate thing at all, it is standard PCA applied to time series.

FPCA refers to the situations when each of the $n$ observations is a time series (i.e. a "function") observed at $t$ time points, so that the whole data matrix is of $n \times t$ size. Usually $t\gg n$, e.g. one can have $20$ time series sampled at $1000$ time points each. The point of the analysis is to find several "eigen-time-series" (also of length $t$), i.e. eigenvectors of the covariance matrix, that would describe "typical" shape of the observed time series.

A less obvious, more fancy, but almost equivalent approach, is to approximate each original time series with $k$ basis functions, effectively reducing the dimensionality from $t$ to $k$. Then one can perform PCA and obtain the eigen-time-series approximated by the same basis functions. This is what one usually sees in the FPCA tutorials. One would usually use smooth basis functions (Gaussians, or Fourier components), so as far as I can see this is essentially equivalent to the brain-dead simple option (b) above.

Tutorials on FPCA usually go into lengthy discussions of how to generalize PCA to the functional spaces of infinite dimensionality, but the practical relevance of that is totally beyond me, as in practice the functional data are always discretized to begin with.

Here is an illustration taken from Ramsay and Silverman "Functional Data Analysis" textbook, which seems to be the definitive monograph on "functional data analysis" including FPCA: 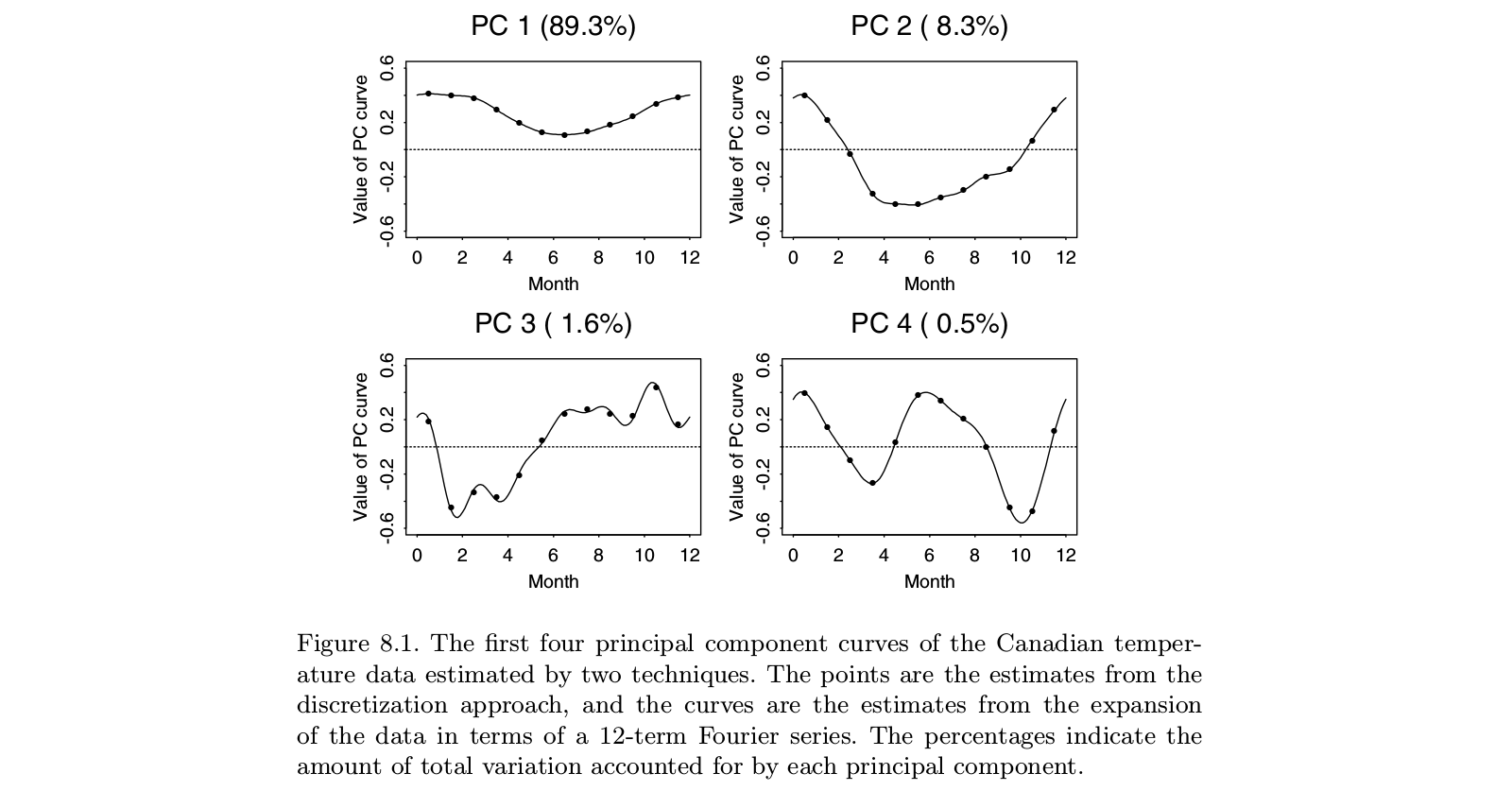 One can see that doing PCA on the "discretized data" (points) yields practically the same thing as doing FPCA on corresponding functions in Fourier basis (lines). Of course one could first do the discrete PCA and then fit a function in the same Fourier basis; it would yield more or less the same result.

PS. In this example $t=12$ which is a small number with $n>t$. Perhaps what the authors view as "functional PCA" in this case should result in a "function", i.e. "smooth curve", as opposed to 12 separate points. But this can be trivially approached by interpolating and then smoothing the resulting eigen-time-series. Again, it seems that "functional PCA" is not a separate thing, it is just an application of PCA.

I worked for several years with Jim Ramsay on FDA, so I can perhaps add a few clarifications to @amoeba's answer. I think on a practical level, @amoeba is basically right. At least, that's the conclusion I finally reached after studying FDA. However, the FDA framework gives an interesting theoretical insight into why smoothing the eigenvectors is more than just a kludge. It turns out that optmization in the function space, subject to an inner product that contains a smoothness penalty, gives a finite dimensional solution of basis splines. FDA uses the infinite dimensional function space, but the analysis does not require an infinite number of dimensions. It's like the kernel trick in Gaussian processes or SVM's. It's a lot like the kernel trick, actually.

Ramsay's original work dealt with situations where the main story in the data is obvious: the functions are more or less linear, or more or less periodic. The dominant eigenvectors of standard PCA will just reflect the overall level of the functions and the linear trend (or sine functions), basically telling us what we already know. The interesting features lie in the residuals, which are now several eigenvectors from the top of the list. And since each subsequent eigenvector has to be orthogonal to the previous ones, these constructs depend more and more on artifacts of the analysis and less on relevant features of the data. In factor analysis, oblique factor rotation aims to resolve this problem. Ramsay's idea was not to rotate the components, but rather to change the definition of orthogonality in a way that would better reflect the needs of the analysis. This meant that if you were concerned with periodic components, you would smooth on the basis of $D^3-D$, which eliminates sines and consines. If you wanted to remove a linear trend, you would smooth on the basis of $D^2$ which gives standard cubic splines.

One might object that it would be simpler to remove the trend with OLS and examine the residuals of that operation. I was never convinced that the value add of FDA was worth the enormous complexity of the method. But from a theoretical standpoint, it is worth considering the issues involved. Everything we do to the data messes things up. The residuals of OLS are correlated, even when the original data were independent. Smoothing a time series introduces autocorrelations that were not in the raw series. The idea of FDA was to ensure that the residuals we got from initial detrending were suited to the analysis of interest.

You have to remember that FDA originated in the early 80's when spline functions were under active study - think of Grace Wahba and her team. Many approaches to multivariate data have emerged since then - like SEM, growth curve analysis, Gaussian processes, further developments in stochastic process theory, and many more. I'm not sure that FDA remains the best approach to the questions it addresses. On the other hand, when I see applications of what purports to be FDA, I often wonder if the authors really understand what FDA was trying to do.

I'm not sure about FPCA, but one thing to remember, is that in extremely high dimensions, there is a lot more "space", and points within the space start to look uniformly distributed (i.e. everything is far from everything else). At this point the covariance matrix will start to look essentially uniform, and will be very highly sensitive to noise. It therefore becomes a bad estimate of the "true" covariance. Perhaps FPCA gets round this somehow, but I'm not sure.

Wikipedia has a comprehensive introduction to the functional principal component analysis. But it is too rigorous for people who have little experience in maths or statistics.

The name of functional PCA is "misleading" in some sense since theoretically, it operates on a stochastic process composed of infinite functions, rather than finite sample functions. The smoothing is a numerical "correction" for the limited samples, as well as the "discontinuous" observance across the domain in reality (for example time).

The Karhunen-Loève theory is the foundation of the functional PCA. It is an "eigendecomposition" of a covariance function of a centered, square-integrable stochastic process in $L^2$ metric space. On the other hand, PCA is an "eigendecomposition" of the variance-covariance matrix calculated from a centered finite dataset in $R^p$ metric space (p variables). Many similarities share between functional PCA and PCA once the correct "working directory" is set. So you have to figure out what is a stochastic process, what is $L^2$ metric space, in the first place. They are quite intuitionally accessible.

Not the answer you're looking for? Browse other questions tagged time-series pca dimensionality-reduction high-dimensional functional-data-analysis or ask your own question.

455
Relationship between SVD and PCA. How to use SVD to perform PCA?
11
Is PCA still done via the eigendecomposition of the covariance matrix when dimensionality is larger than the number of observations?
2
How to compute the variances of PCA-transformed variables?
6
Using shrinkage when estimating covariance matrix before doing PCA
2
Functional Principal Component Analysis (FPCA): Mean Function