How to interpret data spread across diagonal lines in a PCA plot?

On occasion, I'll construct a PCA plot and find that instead of data spreading across PC1 or PC2, it appears to spread across some diagonal line(s) in the plot.

For example, in this article on human population diversity by Mallick et al. (2016), Figure 4a from the extended data shows this phenomenon: 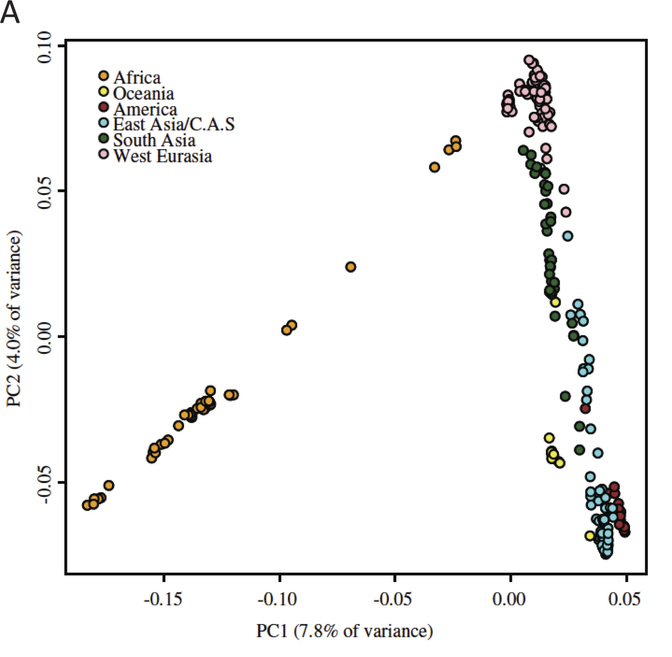 I haven't looked at the data used to generate this figure, and the variance explained by PC1 and PC2 is quite small, but I'm mainly just using it as an example to illustrate the phenomenon.

In the PCA plot, there appear to be two subgroups, separate by PC1, but then within PC1, the samples are spread roughly across the $PC2 = PC1$ axis. On the other side, the right subgroup of PC1 appears to be spread more subtly from bottom-right to top-left.

Any ideas what is going on here?

It's possible your data has a lower or upper boundary. For example, if your dataframe has a Poisson distribution, then you would expect many 0s in your data. The diagonal line may indicate the 0s.

Here is a better explanation.

What does a wedge-like shape of the PCA plot indicate?

Not the answer you're looking for? Browse other questions tagged pca genetics or ask your own question.

21
What is the “horseshoe effect” and/or the “arch effect” in PCA / correspondence analysis?
9
What does a wedge-like shape of the PCA plot indicate?