Given that seasonal models such as Holt-Winters and SARIMA estimate seasonal components of a time series, when would it be necessary or advantageous to manually apply seasonal decomposition and then fit a non-seasonal model?

Another way to ask this question is why or when would one choose a non-seasonal model with seasonal adjustment (e.g. manually calculate seasonal indices using ratio to moving average and apply simple exponential smoothing) over a seasonal model when the data are seasonal?

I can think of several possible reasons.

These days this isn't particularly credible as a reason because even Excel (recent versions) has built-in ways to handle seasonality but I suspect it's the most common in actuality. If the analyst doesn't have access to software that can do Holt-Winters or SARIMA modelling but is basically doing everything by hand, it might be much easier to do a basic seasonal decomposition first and then forecast that with a simple method.

Officially seasonally adjusted series might be the variable of interest

For some variables like unemployment, nearly all the attention and public policy debate is on the seasonally adjusted values, with the seasonal adjustment done by an national statistics office. If seasonality is just a nuisance factor and you only ever want to forecast the seasonally adjusted value, it is much simpler to project forwards the officially adjusted series than to forecast the original one and perform your own seasonal adjustment on it, introducing new sources of variance with what eventually happens and gets published.

This isn't quite your example I know because you're asking about "why would someone manually seasonally adjust the data themselves" but I'm putting it in to round out the picture.

If you want to use a method that requires second order stationarity and you have a time series that exhibits variance increasing with the mean, you strictly speaking need to do something about it. Taking logarithms or (more generally) a Box-Cox transformation is often how it is done, but what if there are other reasons that you want to stick to the untransformed version (eg maybe theoretical relationship between explanatory variable and the target variable).

Seasonal adjustment might be a way out of this, or at least to reduce the problem. Consider this micro-example (in R) with the famous AirPassengers data. The original data is usually log-transformed ($\lambda = 0$ in a Box-Cox transform), and in fact might need something even more aggressive than that ($\lambda < 0$). But once it has been seasonally adjusted, you might get away with a square root transform (more or less $\lambda = 0.5$) 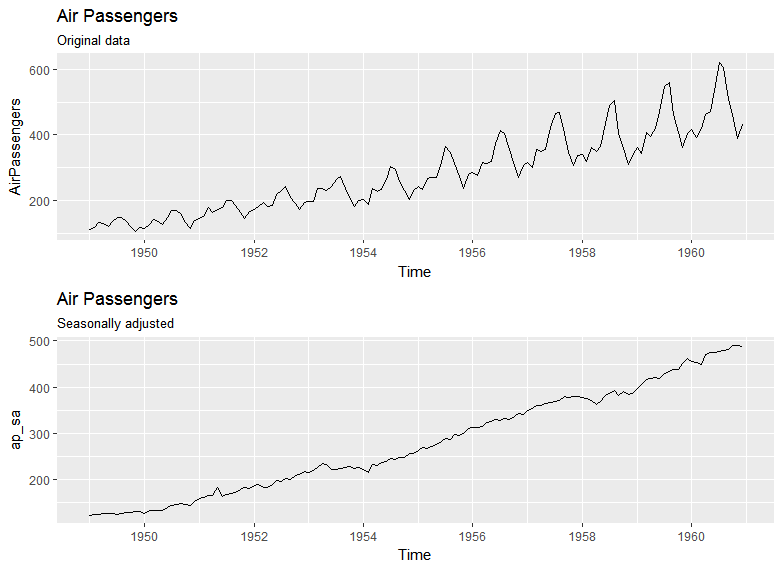 Basically, the seasonal adjustment has made much of the variance problem go away; shown by the higher value of $\lambda$ recommended by the BoxCox.lambda function as needed to get a constant coefficient of variation.

Fits in with a general exploratory analysis workflow

For many purposes, seasonality is a nuisance that hides the relationships between variables. This is shown in the example below (sorry, not great, but might do the point), with the Chinese import and export data that comes with the seasonal package. 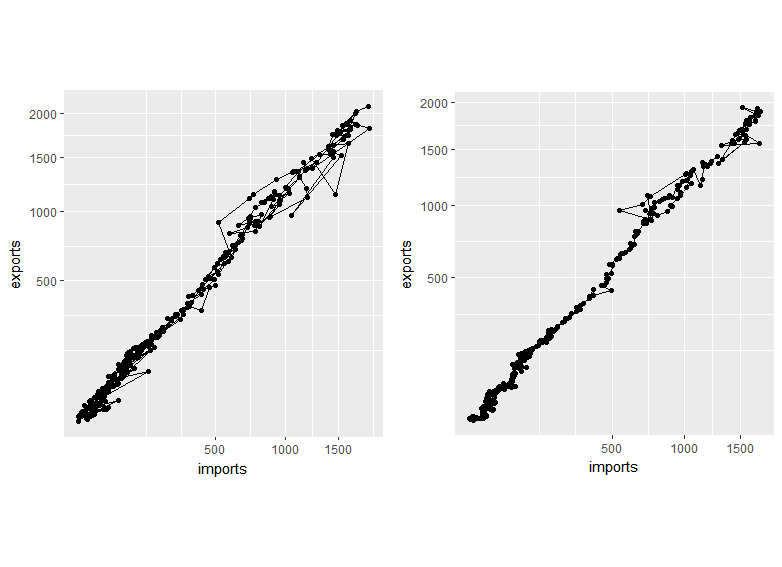 The relationship between exports and imports - both growing very fast - is clearer in the seasonally adjusted graphic on the right (and with a better example dataset, this is sometimes much more so). If the forecasting being done is basically an extension of a whole bunch of analysis and exploration along those lines, it might make sense to use the seasonally adjusted series all the way through.

It seems to work

This question prompted me to do a systematic check of about 3,000 monthly and quarterly data sets from the M3 and Tourism forecasting competitions. The stlm function in Rob Hyndman's forecast package basically does seasonal adjustment first before using ARIMA or exponential smoothing state space models for forecasting, and this can be compared with using the auto.arima and ets functions on the original data. Somewhat to my surprise I found that at least in the case of ARIMA models, the seasonal adjustment done beforehand by stlm led to better average performance than a seasonal ARIMA model. No noticeable difference with the ets models. Results summarised in this graphic:

Full write up available on my blog.

This answer is set in the context of economic time series.

Many economic time series exhibit a relatively stable seasonal pattern that is caused by recurrent events such as weather, holidays, etc. As we are often interested in longer patterns (trend and business cycle), the seasonal pattern is considered some noise to be removed from the data.

For example, in August, we expect a decay in the Industrial Production Index because in this month most companies are workers are on holidays. The relevant question is not why the IPI has decreased but how much of the decrease (if any) is due to the overall economic situation, i.e., the business cycle. Seasonally adjusted data are provided in order to make this kind of analysis easier.

Unless we want to study the seasonal component itself, seasonality is a nuisance element that masks the cycles we are interested in and makes the selection and estimation of a model more complex.

Edit: I will stick to the first part of the previous paragraph; the second one is not necessarily true. For example, Gómez and Maravall (2001) [1] show a case where the autocorrelation function of the seasonally adjusted series is more complex (contain non-zero values at large lags) than that for the original series. They advise against modelling seasonally adjusted data. Therefore, rather than being a kind of auxiliary data to simplify the statistical analysis, it is safer to use seasonally adjusted data when they are the variable of interest (e.g., for interpretation of the economic situation, etc., as mentioned before and in the answer by @PeterEllis).

Disclaimer: Seasonal adjustment methods may not always be ideally suited to the data. In particular, as far as I know, the official seasonal adjustment methods assume that the trend-cycle and the seasonal components are independent of each other. This assumption may not always be correct. There is some literature showing that the seasonal pattern is not as stable as it is often assumed; and it changes precisely due to the fact that the business cycle affects the seasonal pattern. Canova and Ghysels (1994) [1] and Franses (1996, Chapter 6) [2].

An illuminating example is given in Franses (1996), who finds significant seasonality in the Consumer Confidence Index. The CCI is a survey where consumers are asked about their financial situation end expectations over the last 12 and the next 12 months. As the questions are related to the general economic situation, we wouldn't expect that the answer will be affected by the month where the consumer was interviewed. However, in this analysis a seasonal pattern was detected. Maybe people tend to be more positive in summer. Whatever the reason, this suggests that the economic agents may have difficulties in removing seasonality when making their decisions; this may in turn create a link or relationship between the trend-cycle and the seasonal components.

Not the answer you're looking for? Browse other questions tagged time-series forecasting seasonality or ask your own question.