What is the proper name of this optimal-policy area chart, and how can I make one?

When preparing a summary document for policy-makers, it's fairly common to include a graphic that represents how the optimal policy solution varies with two variables. It may be the result of a formal or informal optimisation analysis. Below is an example of such a graphic. The graphic partitions the chart area into contiguous areas, with each area indicating that combinations of (x,y) within that area all share an optimal policy solution.

What's the proper name for such data visualisation? And is there an easy way in Matlab (or even Excel) to generate such graphics relatively automatically from data, without having to just draw every component manually as a custom shape (because if I was going to do that, I'd just use Illustrator)?

For now, please ignore the "CALM" / "SEGREGATE" labels and arrows - I'm interested in the partitioning of the chart into separate areas, and the distinct shading and labelling of each area. I'm not assuming this graph was generated from data: it's just to illustrate the chart style, nothing more. I want to generate a similar style of graph from data. As with the graph below, some of the boundaries may be non-linear. 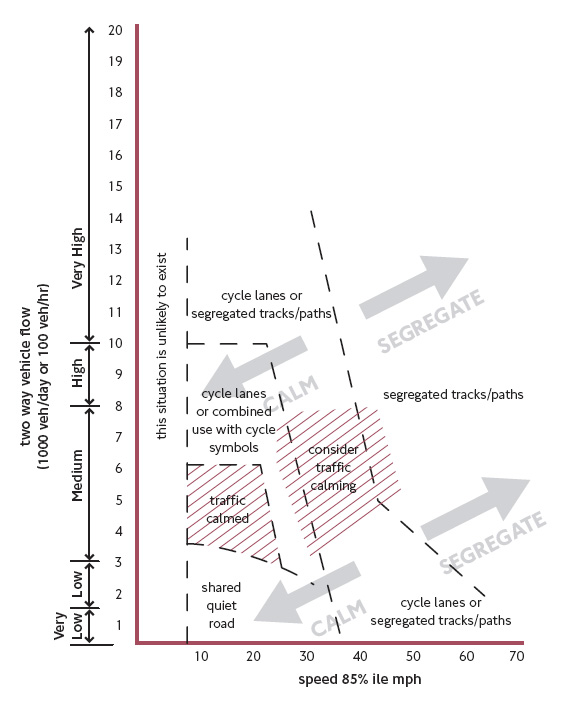 As naught already mentioned, I find it unlikely a specific name for the type of chart is currently in use, although just identifying it by its common components with other charts (a line chart and an area chart superimposed) I would think would be sufficient.

Essentially when working with any statistical program that can produce statistical graphics, the graphical elements of the chart (lines and area) can be added to a plot in a programatic fashion, as well as rendering the cartesian coordinate system. The other meta data elements though (labels for lines and area fills, the background Calm and Segregate Arrows), are unlikely to be implemented in a programatic fashion. This is because they aren't data in the sense that their coordinates, orientation or any other aesthetic in plot directly depict data, hence their placement within the chart is arbitrary.

In my experience typical meta data that can be automatically added to plots are axis labels and labels for graphical elements (and labels for the axis that define the cartesian coordinate system obviously). Placement of labels to avoid overplotting of graphical elements is very difficult though, and so I would bet the labels in the above chart were placed by hand in a vector graphics editing program (like illustrator). You could do it programatically, but it would only work for the one particular chart you taylor it to.

The supplemental labels for the Y axis guide is unique, and so such a guide is unlikely already implemented in any statistical program (although in theory that would be much easier to implement than placement of the labels for elements within the plot).

IMO there isn't much point to adding a name to a particular type of chart once you understand the grammer of the components that make up the chart (which you do given your question). Knowing the grammar there could be very many different types of charts, and so what is the point in giving a line + area chart a special name.

It would be possible to make such a graph in excel (I don't know about Matlab), as well as various other statistical programs. Although it would be difficult to whip up a turn-key script to produce such a polished graphic as the one posted in your question (compared to the amount of time to add such elements post-hoc in a vector editing environment).

Not the answer you're looking for? Browse other questions tagged data-visualization matlab optimization excel or ask your own question.