I have a question about the running time of the accept/reject method to sample from discrete distributions.

For the exponential case:

For the Pareto case:

The accept/reject method consists in taking the max of these $p_i$ and build a rectangle of width $n_{outcomes}$, height $\max_i p_i$. Then draw a random point in the rectangle and see if it is under the probability distribution, in that case accept, otherwise reject.

The question is how does the running time increase with $n_{outcomes}$?

• I'm not completely convinced by this reasoning

• I don't know what's the estimate for the largest number sampled in N iterations from a Pareto. 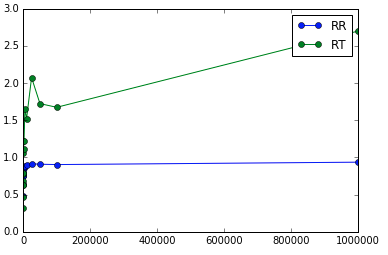 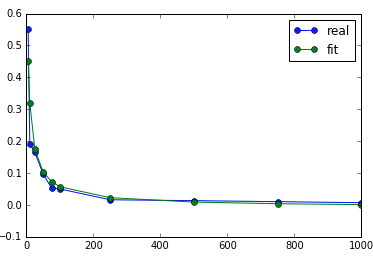 Let's consider two cases, the first where the probabilities are bounded above and the second where they are not. An example of the first case is the Exponential distribution, the second is a Gamma distribution with shape parameter $< 1$.

Let's denote the probabilities by $p$ and, in the first case, their $\sup$ by $p_{sup}$. It should be clear that in the first case the acceptance rate will approach $\text{E} [p/p_{sup}]$. Since this is evidently a constant, the runtime for your algorithm will be $O(1)$ in $N$.

In the second case, $p$ is unbounded above, and, intuitively, we expect the acceptance rate to go to zero / the runtime to go to $\infty$ as $N \to \infty$. It seems to me that how fast it does depends upon the shape of the distribution, but it may be that the constraint imposed on the functional form by the requirement that the distribution integrate to 1 is strong enough to provide an upper bound on the convergence rate.

I created some simulations in the second case, using a Gamma distribution with shape parameter 0.2 as my baseline, to investigate empirically the convergence rate. The R code, written for clarity rather than efficiency, is:

The plot indicates, but of course is not proof, that the increase in runtime was proportional to $\log N$: 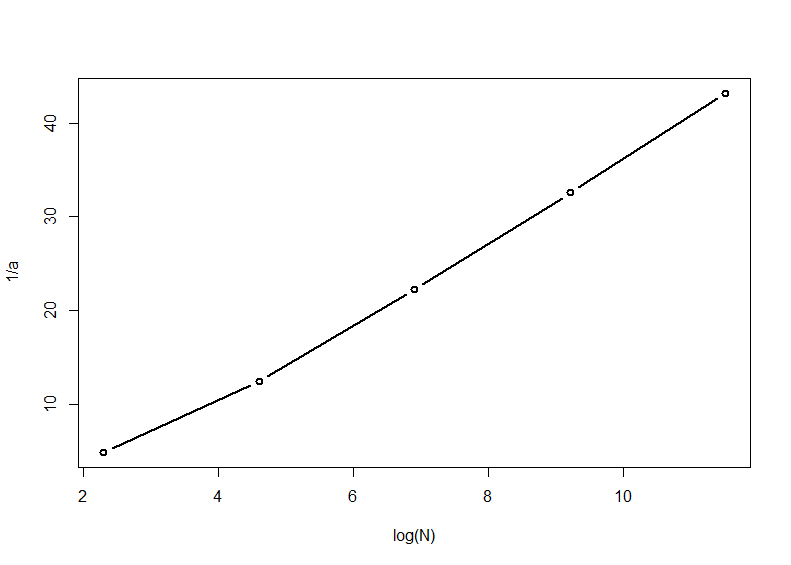 Finaly, I figured it out.

since the probability distribution is normalized ($\sum_{i=1}^N p_i = 1$). The acceptance rate (AR) is just

This is the probability of success, so the expected number of iterations (i.e. the running time of the algorithm) is just the inverse of this:

where $R_i$ are the random numbers drawn in this case from a uniform distribution $U(0, 1)$. The denominator is extensive, so it's proportional to N, for the numerator we have to use limit theorems for extremes from probability theory.

and H(x) is non degenerate (it does not take a single value).

The idea is that

Therefore we need to find

In the case of a uniform distribution $U(0,1)$, we have possible sequences:

and the limiting distribution for the max is an exponential distribution. Using our results for $a_N$ and $b_N$ we can estimate the max:

Consequently the estimate for $p_{max}$ is $p_{max} = O(1/N)$, and therefore the running time (RT) of the algorithm can be estimated as the rejection rate

For the exponential distribution the possible sequences are:

therefore the estimate for the max is:

where $\Lambda$ is a random variable with probability distribution which converges to a Gumbel distribution as $N \to \infty$.

and the running time of the accept/reject algorithm is

A naive analysis may conclude that

but being the variance of the Fréchet divergent, there is a finite probability that $Z_N$ will strongly deviate from the mean and the behavior $O(\sqrt{N})$ will be hidden by a large amount of noise.

Not the answer you're looking for? Browse other questions tagged distributions sampling algorithms pareto-distribution or ask your own question.