I've been trying to develop an intuition based understanding of Bayes' theorem in terms of the prior, posterior, likelihood and marginal probability. For that I use the following equation: $$P(B|A) = \frac{P(A|B)P(B)}{P(A)}$$ where $A$ represents a hypothesis or belief and $B$ represents data or evidence.
I've understood the concept of the posterior - it's a unifying entity that combines the prior belief and the likelihood of an event. What I don't understand is what does the likelihood signify? And why is the marginal probability in the denominator?
After reviewing a couple of resources I came across this quote:

The likelihood is the weight of event $B$ given by the occurrence of $A$ ... $P(B|A)$ is the posterior probability of event $B$ , given that event $A$ has occurred.

The above 2 statements seem identical to me, just written in different ways. Can anyone please explain the difference between the two?

There are several good answers already, but perhaps this can add something new ... 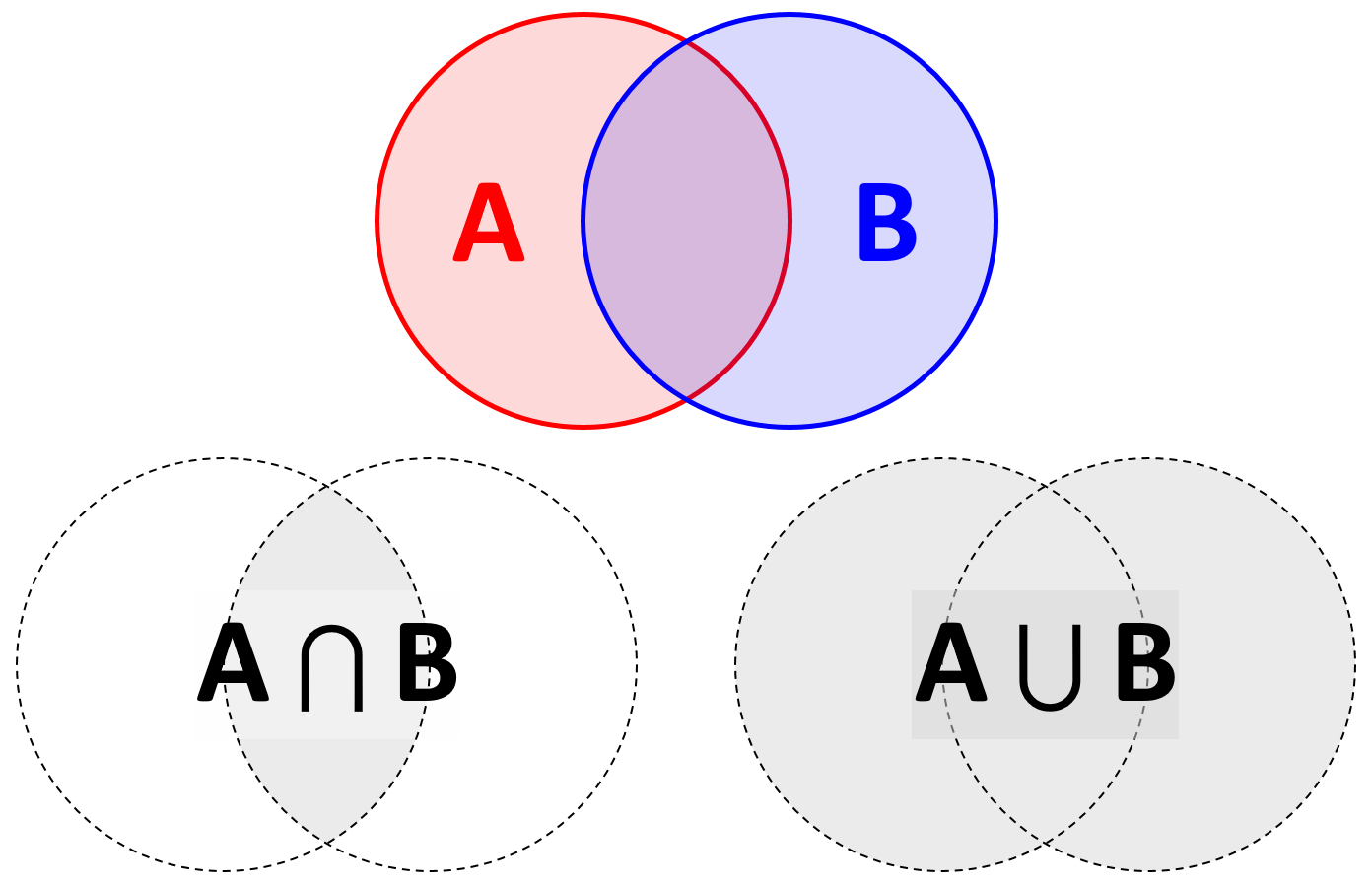 The marginal probabilities $P(A)$ and $P(B)$ are given by the areas of the corresponding circles. All possible outcomes are represented by $P(A \cup B)=1$, corresponding to the set of events "$A$ or $B$". The joint probability $P(A \cap B)$ corresponds to the event "$A$ and $B$".

Bayes theorem is really just a mathematical consequence of the above definitions, which can be restated as $$P(B\vert A)P(A)=P(A \cap B)=P(A\vert B)P(B)$$ I find this symmetric form of Bayes theorem to be much easier to remember. That is, the identity holds regardless of which $p(A)$ or $p(B)$ is labelled "prior" vs. "posterior".

(Another way of understanding the above discussion is given in my answer to this question, from a more "accounting spreadsheet" point of view.)

@gung has a great answer. I would add one example to explain the "initiation" in a real world example.

So the formula is

Note the same formula can be written as

where $\propto$ means proportional to and $P(E|H)$ is the likelihood and $P(H)$ is the prior. This equation means that the posterior will be larger, if the right side of the equation larger. And you can think about $P(E)$ is a normalization constant to make the number into probability (the reason I say it is a constant is because the evidence $E$ is already given.).

For a real world example, suppose we are doing some fraud detection on credit card transactions. Then the hypothesis would be $H \in \{0,1\}$ where represent the transaction is a normal or fraudulent. (I picked extreme imbalanced case to show the intuition).

The ultimate goal is calculating $P(H|E)$ which means we want to know if a transaction is a fraud not not based on the evidence in addition to prior. If you look at the right side of the equation, we decompose it into likelihood and prior.

Where we already explained what is prior, here we explain what is likelihood. Suppose we have two types of evidence, $E\in\{0,1\}$ that represent, if we are seeing normal or strange geographical location of the transaction.

The likelihood $P(E=1|H=0)$ may be small, which means given a normal transaction, it is very unlikely the location is strange. On the other hand, $P(E=1|H=1)$ can be large.

Suppose, we observed $E=1$ we want to see if it is a fraud or not, we need to consider both prior and likelihood. Intuitively, from prior, we know there are very few fraud transactions, we would likely to be very conservative to make a fraud classification, unless the evidence is very strong. Therefore, the product between two will consider two factors at same time. 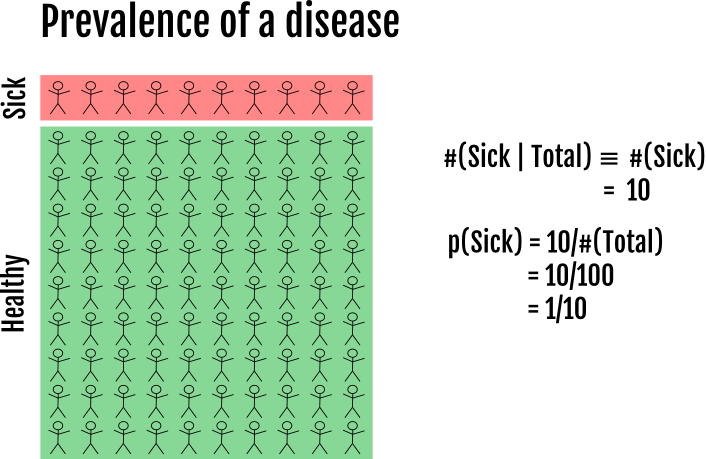 To simplify the example, we assume we know which ones are sick and which ones are healthy, but in a real test you don’t know that information. Now we test everybody for the disease:

The true positives = number of positive results among the sick population = #(Positive | Sick) = 9.

Now the interesting question, what's probability of being sick if you test positive? In math, $\Pr(Sick | Positive)?$ 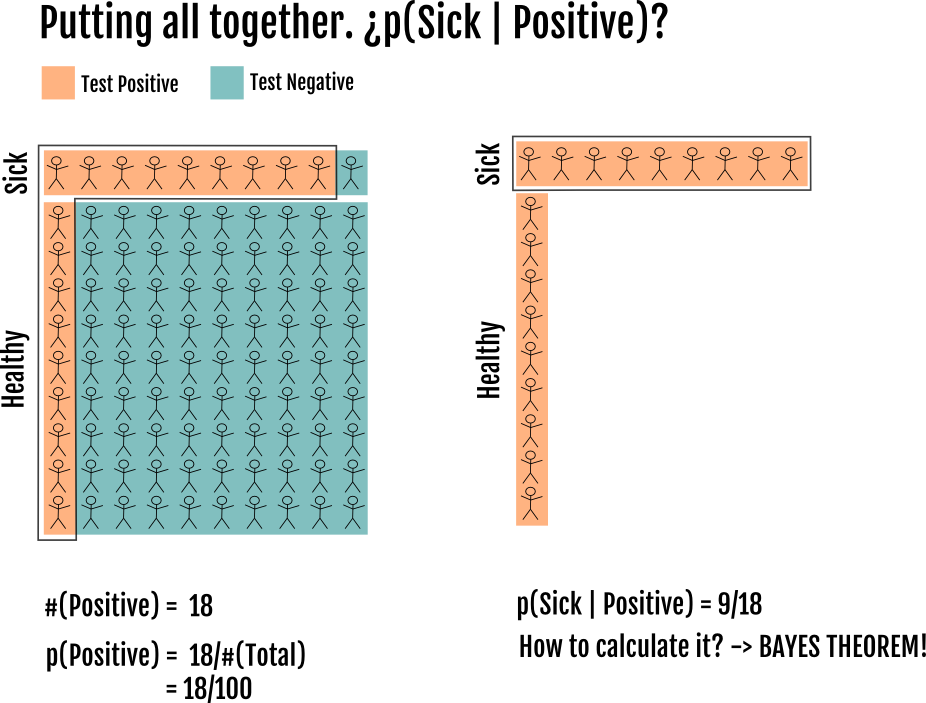 Note that Bayes' rule is

If $B \perp A$, then $P(b,a)=P(b)P(a)$. So it’s almost like telling us how far the joint deviates from full independence, or how much information the variables have in common.

Interestingly, the log of this ratio is also present in mutual information:

The prior and marginal are analogously defined, but based on "totals" instead of a particular column

I find this helps me.

Not the answer you're looking for? Browse other questions tagged bayesian likelihood intuition or ask your own question.

5
Normalizing constant irrelevant in Bayes theorem?
3
PyMC – Calculate Evidence (Bayes' Theorem denominator)
2
A question on Bayesian updating (Han Solo and the Bayesian priors)
3
Bayes theorem: normalisation denominator and likelihood
4
Metropolis Hastings Algorithm - Prior vs Proposal vs Numerator of Bayes Theorem
4
What's the difference between prior and marginal probabilities?
0
Bayes Theorem in words and languages
1
Clarification on posterior computation for genomic data in bayesian framework
6
The meaning of Bayesian update