I'm a novice in time series analysis and I'm trying to detect trend reversals automatically. In the example below, a heuristic rule would say that a trend reversal has occurred if the value has been trending in a direction for t1 seconds, then in the other direction for t2 = t1/k seconds. 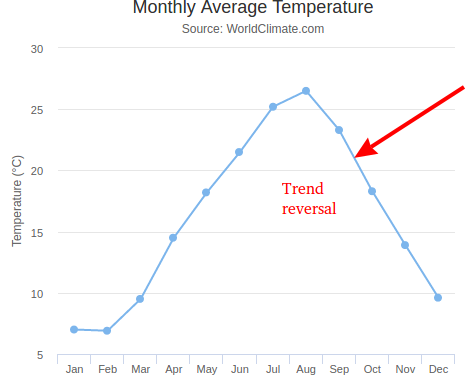 I've tried to parse the answer on detecting trends but it went beyond my head. While I know I need to read up way more on time series analysis, I wonder if there are simpler (and more coarse) methods for detecting trends and trend reversals. Something like detecting slopes and calculating the angle between them?

With realistically noisy signals, this is not a simple problem. For example, you write

a heuristic rule would say that a trend reversal has occurred if the value has been trending in a direction for $t1$ seconds, then in the other direction for $t2 = t1/k$ seconds.

In econometric technical analysis, one implementation of this is through the MACD (moving average convergence divergence).

When the difference between 3. and 4. crosses 0, it's an indication that the trend reverse.

You can see an example in the following diagram (taken from the Wikipedia entry).

In the bottom diagram, the blue line is 3., and the red line is 4. The difference between them is the grey bar chart.

You can see that a zero crossing of the grey bar chart, roughly corresponds to a trend change in the original green/red prices.

This is not an easy fix and not "simple". Please see this paper from Tsay and Balke on the papers titled "Outliers, level shifts, and variance changes in time series" & "Detecting Level Shifts in Time Series".

We implemented this in Autobox 25 years ago(I am affiliated with them).

Not the answer you're looking for? Browse other questions tagged time-series trend structural-change or ask your own question.