What to do with a lmer model that violates the assumptions of normal residuals?

I have the following lmer model:

Width_mm is the diameter of dung balls made by dung beetles Buried is whether or not a dung ball was buried by a beetle (0=no, 1= yes). 26 chambers were included in the experiment and multiple dung balls came from the same chamber, so I have included the random term ~1|chamber to account for the non-independence of data. Furthermore, log likelihood tests showed that the model was improved by allowing the slopes of the Buried term to vary over chambers (random=Buried|Chamber). The output looks like this:

My residual plots do not look so good though: 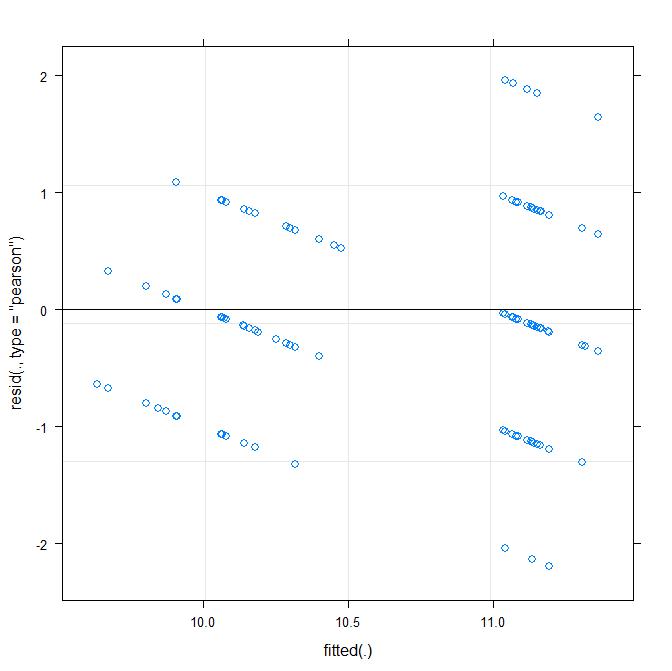 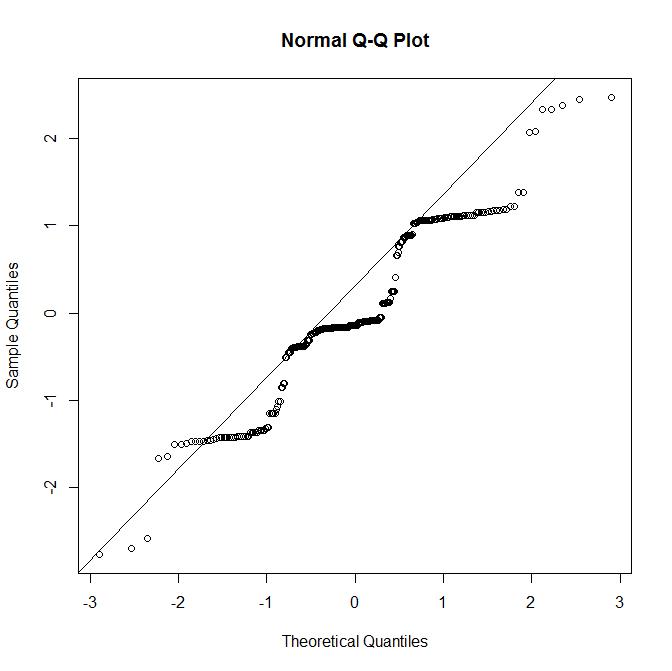 The residuals are clearly not normal. I am now stuck as to how to proceed with this analysis. I could do a simple Mann–Whitney U test to test for a difference between Buried, however this would ignore the non-independence of dung balls from the same chamber.

1) Would a simple Mann–Whitney U test be an appropriate alternative or is it incorrect to ignore the non-independence of the data?

2) Is trying to bootstrap this model something that a novice like me could try or is it something best left to the professionals? If it is a relatively straight forward thing to do, could anyone recommend any basic resources to get me started?

3) Are there any other options for dealing with lmer models that violate the assumptions of normal residuals? My response variable only has 5 possible variables (width of 9,10,11,12 or 13mm) so I don’t think transforming the response variable will help.

Any guidance would be much appreciated. Thanks.

John as correctly pointed out that I have been using the wrong predictor variable. I have now respecified the model to predict ball width based on whether or not an egg was laid in a dung ball (EggLaid, a 2 level predictor) The model is now:

With the following output:

The QQ plot of residuals look much better, however I still have an odd looking residual vs fitted plot, which I assume reflects the 5 values of the response variable: 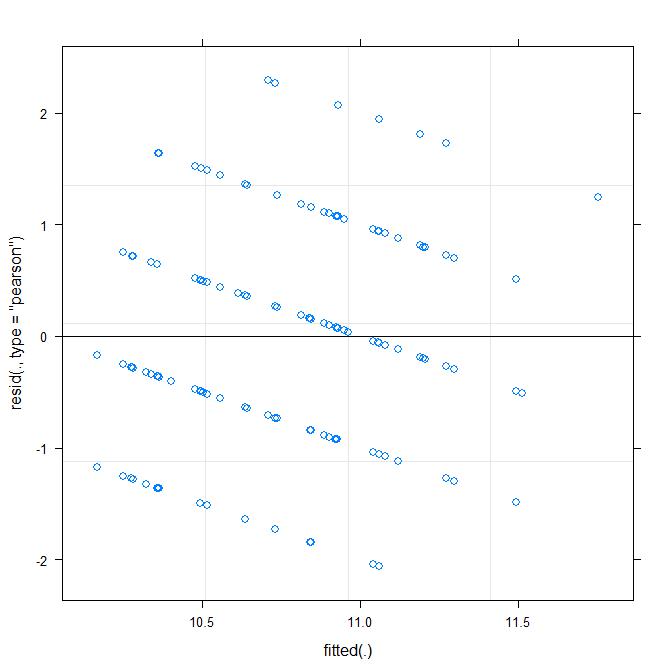 Is this residual plot "passable" given the 5 values of the reponse variable, or is this model not OK and I need to bootstrap the coefficients? Also to clarify, the values for width (the response) are rounded to the nearest mm.

A FURTHER UPDATE: I have had a go at bootstrapping the regression coefficients (using parametric bootsrap) using some helpful info here. My code and output is as follows:

I am a complete newbie to bootstrapping, so if I have made an error in the code, any suggestions would be graciously welcomed

The funny residuals almost certainly relate to the quantization of the response to the set $\left\{9, 10, 11, 12, 13 \right\}$. A normal distribution, conditional on covariates, can't do that--the event has probability zero. As you've said in your update, this quantization is due to rounding (ie, the actual values are not exactly $9.0$ or $13.0$ but were just rounded to those values).

I think this is a bit of a case of "good news/bad news." On the one hand, if the outcome has been rounded, that's really a complicated form of interval censoring, so non-parametric inference won't help. I hypothesize that the point estimates will be at least somewhat biased due to the censoring, and you would need to use a method that models this in order to reduce this bias. FWIW, I don't see any readily available software that does this for mixed models. The R package grouped fits these models for vanilla GLMs.

On the other hand, the rounding may not be a huge issue. In the first residuals vs fitted plot in which you regress Buried there seems there was a tendency to avoid prediction of non-integer values, which makes me worry that the model could be optimistic with its standard error estimates due to the quantization. This doesn't seem to be so true in the second model where EggLaid was the predictor. It might be worth running a simulation study to bound the bias, because I don't have a great intuition about how small or big this bias might be.

In conclusion, I would say yes, you should bootstrap, and that ideally you should use a semi-parametric bootstrap that jitters the response variables with a bit of noise. It looks like this happen already if you use the function bootMer in lme4. From the docs:

If ‘use.u’ is ‘FALSE’ and ‘type’ is ‘"parametric"’, each simulation generates new values of both the “spherical” random effects u and the i.i.d. errors epsilon, using ‘rnorm()’ with parameters corresponding to the fitted model ‘x’.

These iid errors epsilon will mean that the bootstrapped sample is no longer quantized. So as long the the initial residual variance is approximately correct, the bootstrap will do something reasonable.

Not the answer you're looking for? Browse other questions tagged mixed-model bootstrap residuals lme4-nlme rounding or ask your own question.

9
Is there a name for this type of bootstrapping?
0
Random effect with zero variance
3
Is an LMER appropriate with only one x per participant?
1
Lmer set up for repeated measurements?
2
Problem with non-normal residuals (lmer function)
1
How to account for heteroskedasticity in residuals in a fully crossed mixed-effects model (lmer)?
1
UPDATED:Should I use lme() or gls() for a repeated measure desing?