We can solve this problem almost instantly in our heads using the "68-95-99.7" rule. I will explain the process in detail because that is what matters. The answer is of little interest: the point to this question is to help us learn to think about probability distributions. 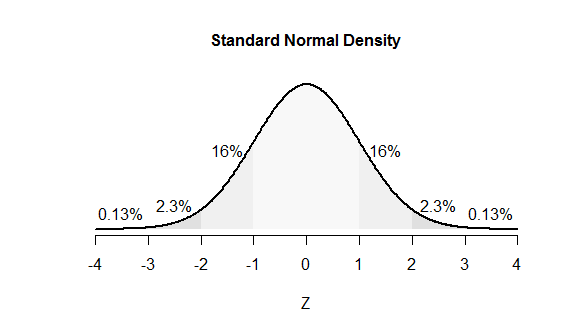 People who think effectively about probabilities use mental figures like this one.

The only arithmetic needed to get to this point involved subtractions, one division (of 0.0002 / 0.0001) and halving.

We know both of these answers will be a little too large, but the second must be quite accurate.

Having gone through this thought process, we could write down the following R commands immediately because they directly carry out the calculation (albeit more accurately):

That agrees with the three decimal digit table I used to get $2.054.$

So you can use R to get the answer:

where $F_{\mu,\sigma}(\cdot)$ denotes the cumulative distribution function of the normal distribution with mean $\mu$ and standard deviation $\sigma$. $b$ and $a$ (with $b>a$) are the upper and lower bounds, respectively and $p$ ($0<p<1$) is the proportion of values that lies between $a$ and $b$.

There is no simple way to calculate this, I believe. I'd suggest looking into numerical solutions for it.

Just to explain a bit, this is the normal distribution:

The percentage of values in the interval [a, b] is then given by:

You know F(a,b), you know a and b, and you know the mean $\mu$. What you need to do is to solve this equation for $\sigma$. However, the integral is the error function, you cannot solve it analytically, so you can't solve for $\sigma$.

Using a numerical approach, it gets easier - for example, you could calculate the normal distribution with a fixed $\sigma$ for 1000 x values, calculate the area between a and b, and then iteratively change $\sigma$ until you find the value that comes closest to 0.98.

There are also functions in most programming languages that calculate the cumulative normal distribution for given parameters, so if you want higher precision, you could use those (again with iterations of $\sigma$).

I entered on WolframAlpha:

Solving which assuming a is real.

Multiple expansions of error function are listed on its Wikipedia page and on math.SE but they are not very accurate for hand calculations.

So therefore a standard deviation of .0001 is required.

Not the answer you're looking for? Browse other questions tagged normal-distribution standard-deviation or ask your own question.