Let's say I have a model that gives me projected values. I calculate RMSE of those values. And then the standard deviation of the actual values.

Does it make any sense to compare those two values (variances)? What I think is, if RMSE and standard deviation is similar/same then my model's error/variance is the same as what is actually going on. But if it doesn't even make sense to compare those values then this conclusion could be wrong. If my thought is true, then does that mean the model is as good as it can be because it can't attribute what's causing the variance? I think that last part is probably wrong or at least needs more information to answer. 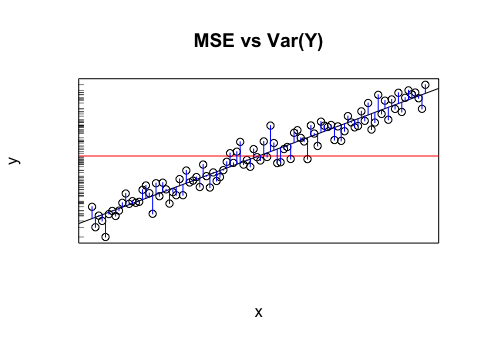 There are various ways to measure the error of a model estimation; among them, the Root Mean Squared Error (RMSE) that you mentioned, $ \sqrt{\frac{1}{n} \sum_{i=1}^n (y_i - \hat y_i)^2}$, is one of the most popular. It is conceptually quite similar to the SD: instead of measuring how far off an actual value is from the mean, it uses essentially the same formula to measure how far off an actual value is from the model's prediction for that value. A good model should, on average, have better predictions than the naïve estimate of the mean for all predictions. Thus, the measure of variation (RMSE) should reduce the randomness better than the SD.

This argument applies to other measures of error, not just to RMSE, but the RMSE is particularly attractive for direct comparison to the SD because their mathematical formulas are analogous.

Someone asked me offline for a citation that supports the idea of the SD being a benchmark for the RMSE. Personally, I first learnt this principle from Shmueli et al. 2016. Sorry, but I do not have the book handy, so I cannot cite a page number.

In case you are talking about the mean squared error of prediction, here it can be: $$ \frac{\sum_i(y_i-\hat{y}_i)^2}{n-p}, $$ depending on how many (p) parameters are estimated for the prediction, i.e., loss of the degree of freedom (DF).

So you can consider the latter formula (sample variance) as a special case of the former (MSE), where $\hat{y}_i = \bar{y}$ and the loss of DF is 1 since the mean computation $\bar{y}$ is an estimation.

which is the easiest to compute.

Not the answer you're looking for? Browse other questions tagged standard-deviation standard-error rms or ask your own question.

2
How we can understand that model overfitting by using RMSE?
0
How to find whether root means square error (RMSE) value obtained is good or bad?
0
How to explain RMSE to business folks and in a simple and easy way

0
Overall standard deviation
6
How to calculate the specific Standard Error relevant for a specific point estimate within a linear regression?
4
Standard deviation vs standard error of the mean for intervals
2
Using Standard Deviation to Understand Consensus
0
Does it make sense to talk about the standard deviation of RMSE?
0
How to quantify the fluctuation of an error?
1
Understanding RSE(Residual Standard Error)
1
What would be a reason to use the Root Mean Square Error (RMSE) to combine data?