I know there are cases (normal distribution, at least), where everything can be calculated analytically, but I seek a more general solution here.

Therefore there exists a closed form expression for the conditional density and one can thus call a generic simulation method to simulate from it, like accept-reject, Gibbs sampling, or a Metropolis-Hastings algorithm.

The resolution even extends to independent variables that are not identically distributed.

Note: A similar question was asked a while ago, but none of the answers mentions this generic solution.

For instance, if $f$ is the N$(0,1)$ density and $n=4$, a Metropolis-within-Gibbs sampler for this problem would be of the form 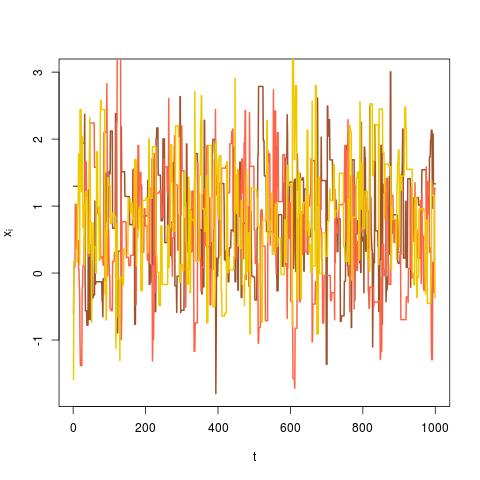 To borrow a simple example from the authors, take an exponential sample ${\bf y}$ to be simulated given the sum statistic being fixed. As it is well-known, the conditional distribution of ${\bf y}$ is then a (rescaled) Beta and the proposed algorithm ends up being a standard Beta generator. For the method to work in general, $T({\bf y})$ must factorise through a function of the ${\bf u}$’s, a so-called pivotal condition. If this condition does not hold, it gets more complicated: the authors introduce a pseudo-prior distribution on the parameter $θ$ to make it independent from the ${\bf u}$’s conditional on $T({\bf y})=t⁰$. While the setting is necessarily one of exponential families and of sufficient conditioning statistics, I find it amazing that this property is not more well-known.

I think it's worth noting the normal case even though the questioner seeks a more general answer. Following the logic shown here How to generate two groups of $n$ random numbers in $U(0,1)$ such that sum of these two groups equal? leads to the result that for the normal case the conditional distributions are all normal.

So, for example, if we want to generate realizations of $X_1, X_2, \ldots X_n$ that sum to $z$ where the $X_i$ are all identically normal, here is the resulting approach:

Not the answer you're looking for? Browse other questions tagged random-variable simulation marginal-distribution conditioning jacobian or ask your own question.

18
simulating random samples with a given MLE
8
Simulation involving conditioning on sum of random variables
3
How to sample from a distribution so that mean of samples equals expected value?
5
How to generate two groups of $n$ random numbers in $U(0,1)$ such that sum of these two groups equal?
3
AR(1) with known initial and terminal condition: how to draw the innovations?

9
How to model the sum of Bernoulli random variables for dependent data?
2
Weakly correlated Random variables
18
simulating random samples with a given MLE
5
Probability of random variable being lesser than the other
4
what exactly does it mean when we say "Let $X_1, X_2 ...$ be iid random variables"
1
How to notate joint conditional probability