I'm working on a school project in Java and my goal is to detect and remove outliers from a dataset containin geo points.

The final result should be a single cluster, with any shape, containing all the points inside a real area (like a stadium for example). Here's a quick example of what I mean: 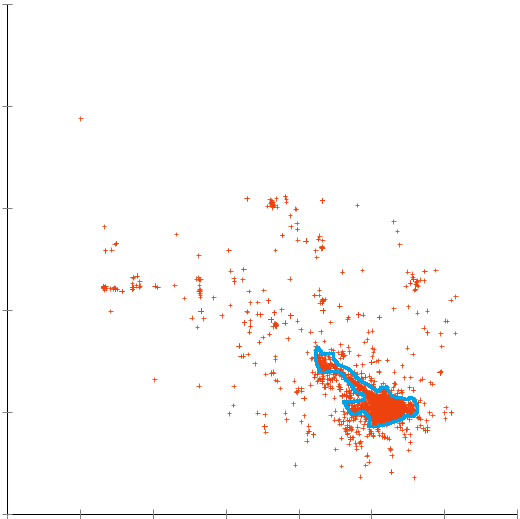 The hand-drawn blue line represents the expected cluster, while all the outside points should be considered as outliers (this is just one of the possible clusters that can be ok for my case, not detecting the top part is fine too).

While DBSCAN looks like the best choice, I need this to be unsupervised so I can't manually set eps and minPts (the algorithm should run on several datasets). What could work is a function that defines both eps and minPts based on the size of the dataset and the size of the area (maybe in meters, using a geo-based distance function), but defining such function can be quite challenging for a small project.

To avoid dealing with eps I decided to try OPTICS but it still requires minPts and, in my tests using ELKI, it returns a single cluster with all the points.

Finally, since ELKI has a lot of builtin algorithms, I also tried LibSVMOneClassOutlierDetection becauseit should be the best option for binary classification (which is my task basically, classes can be seen as "inside" and "outside" the cluster), but it detects almost any point as outlier (even if they have a score, and all the needed points have score < 0.1 so I may do some post-processing steps later).

So, here are the questions:

EDIT: Based on suggestions I've tried OPTICSXi with minPts = 50, here's the result. 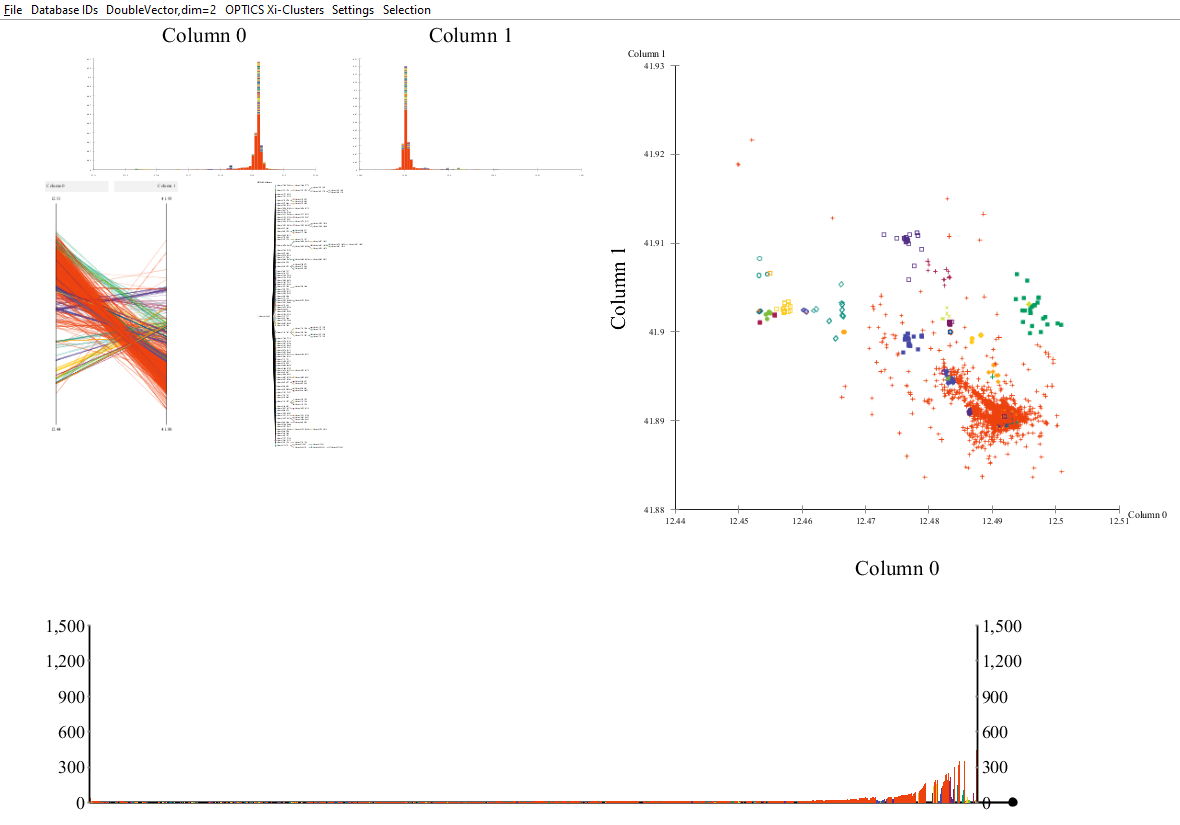 As you can see, there are two problems:

EDIT 2: did some other tests using DBSCAN with an automatic eps estimation and I like the result more than OPTICS' one, but the question now is: how can I extract the purple cluster and remove all the others? I can't seem to find any way to evaluate a DBSCAN cluster based on density. 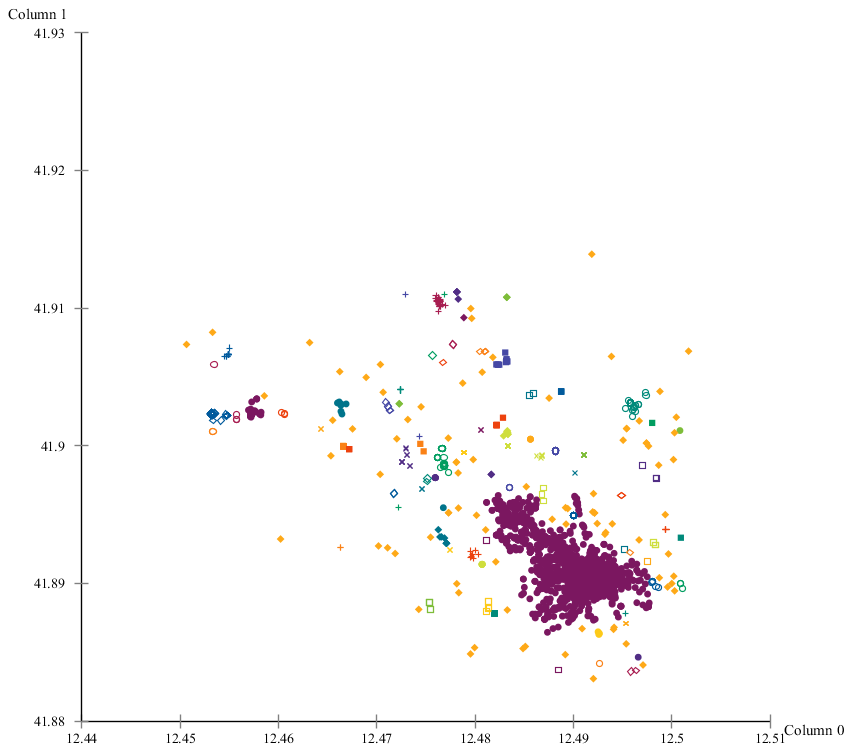 Your task seems to be rather a clustering than an outlier detection task.

In the following, I use this popular data set of User locations (Joensuu).

Running OPTICS with the parameters

yields the following (hierarchical) clustering. You can see there are three larger clusters (corresponding to Joensuu, Lieska, and Savijärvi; note that the plot has latitude and longitude 'the wrong way'), and some noise (violet here) that is not density-reachable with 5km distance and 50 points. These are your outliers.

You can tell there are some subclusters in both cities. For example one corresponding to the Prisma Joensuu shopping mall. To see more detail, it is helpful to further reduce epsilon, maybe to just 500 meters. 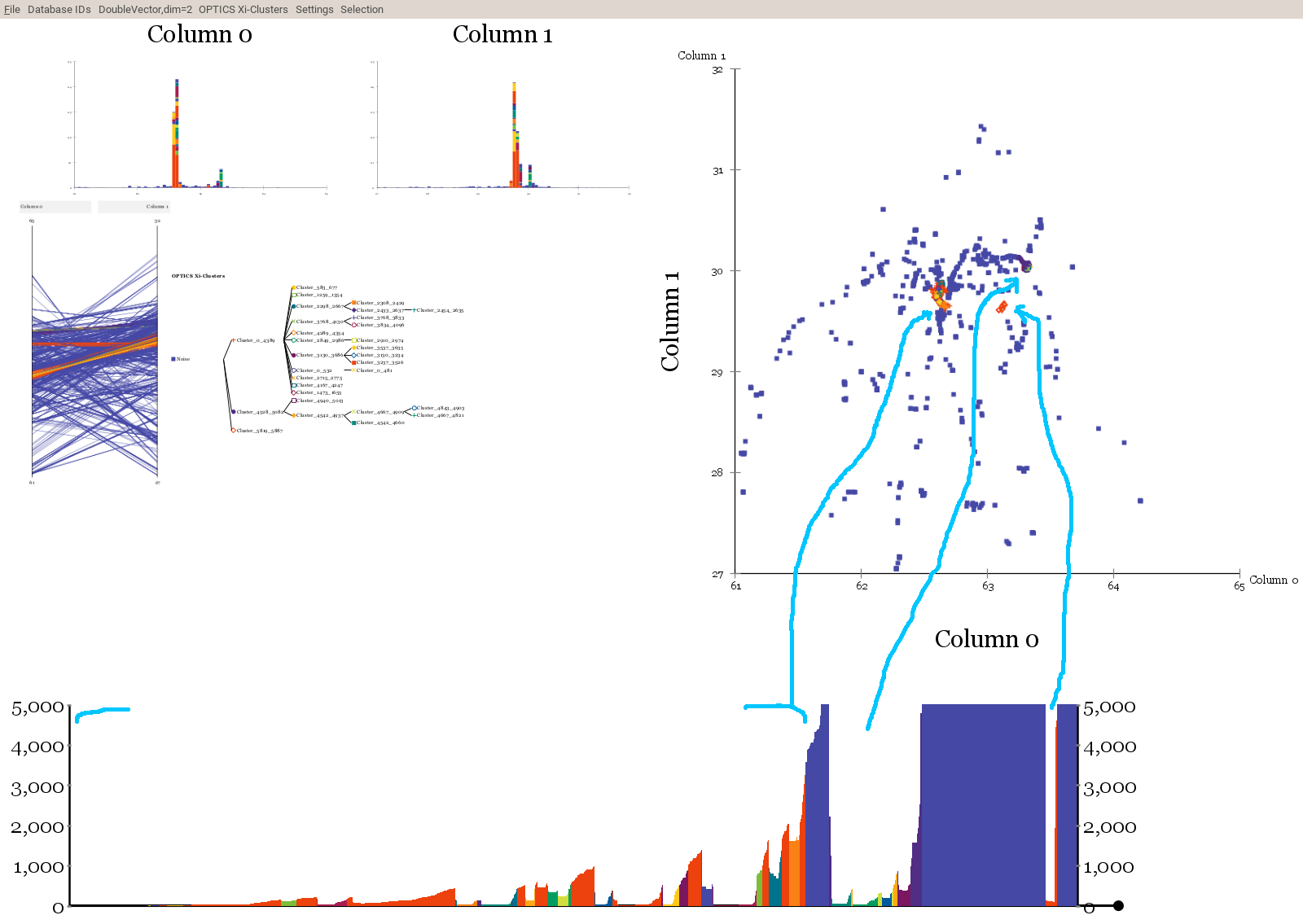 To answer Edit 2 of this old question -- one way would be to compute the Mahalanobis distance for each point to the center of the cluster, then delete those above a certain cutoff distance.

Not the answer you're looking for? Browse other questions tagged clustering outliers java or ask your own question.

18
A routine to choose eps and minPts for DBSCAN
0
Variables involved in kNNdistplot (dbscan package) in R
2
Optics\dbscan produces cluster size smaller than minPts
0
DBSCAN eps understanding problem (and picking correct one in my case)
0
Clustering DBSCAN's parameter Epsilon: How is eps related to scale of data being clustered?