where $n$ is number of elements in the vector, $x$ is a vector, $p(x)$ is a probability density of $x$, $h$ is dimension of the Parzen Window, and $\phi$ is a window function.

Imagine that you have some datapoints $x_1,\dots,x_n$ that come from common unknown, presumably continuous, distribution $f$. You are interested in estimating the distribution given your data. One thing that you could do is simply to look at the empirical distribution and treat it as a sample equivalent of the true distribution. However if your data is continuous, then most probably you would see each $x_i$ point appear only once in the dataset, so based on this, you would conclude that your data comes from an uniform distribution since each of the values have equal probability. Hopefully, you can do better then this: you can pack your data in some number of equally-spaced intervals and count the values that fall into each interval. This method would be based on estimating the histogram. Unfortunately, with histogram you end up with some number of bins, rather then with continuous distribution, so it's only a rough approximation.

Kernel density estimation is the third alternative. The main idea is that you approximate $f$ by a mixture of continuous distributions $K$ (using your notation $\phi$), called kernels, that are centered at $x_i$ datapoints and have scale (bandwidth) equal to $h$:

This is illustrated on the picture below, where normal distribution is used as kernel $K$ and different values for bandwidth $h$ are used to estimate distribution given the seven datapoints (marked by the colorful lines on the top of the plots). The colorful densities on the plots are kernels centered at $x_i$ points. Notice that $h$ is a relative parameter, it's value is always chosen depending on your data and the same value of $h$ may not give similar results for different datasets. 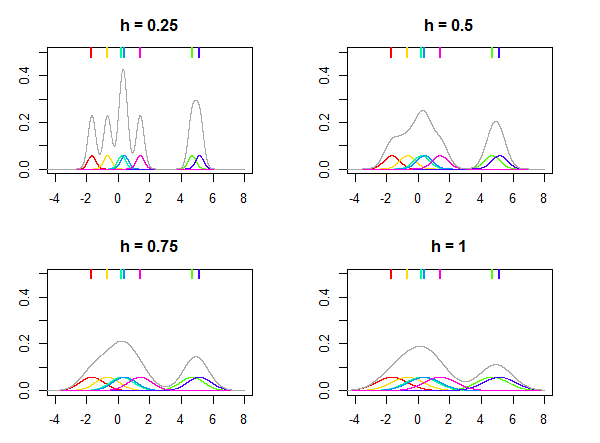 Kernel $K$ can be thought as a probability density function, and it needs to integrate to unity. It also needs to be symmetric so that $K(x) = K(-x)$ and, what follows, centered at zero. Wikipedia article on kernels lists many popular kernels, like Gaussian (normal distribution), Epanechnikov, rectangular (uniform distribution), etc. Basically any distribution meeting those requirements can be used as a kernel.

Saying this in plain English, what you assume in here is that the observed points $x_i$ are just a sample and follow some distribution $f$ to be estimated. Since the distribution is continuous, we assume that there is some unknown but nonzero density around the near neighborhood of $x_i$ points (the neighborhood is defined by parameter $h$) and we use kernels $K$ to account for it. The more points is in some neighborhood, the more density is accumulated around this region and so, the higher the overall density of $\hat{f_h}$. The resulting function $\hat{f_h}$ can be now evaluated for any point $x$ (without subscript) to obtain density estimate for it, this is how we obtained function $\hat{f_h}(x)$ that is an approximation of unknown density function $f(x)$.

The difference between kernel density and other densities, as normal distribution, is that "usual" densities are mathematical functions, while kernel density is an approximation of the true density estimated using your data, so they are not "standalone" distributions.

I would recommend you the two nice introductory books on this subject by Silverman (1986) and Wand and Jones (1995).

1) My understanding is that users have a choice of functions to use for $\phi$, and that the Gaussian function is a very common choice.

3) You can plug in any density function you like as your window function.

4) $h$ determines the width of your chosen window function.

Not the answer you're looking for? Browse other questions tagged density-function kernel-smoothing intuition density-estimation or ask your own question.

4
What is the difference between Kernel density estimation and Parzen window estimation?
0
Making a distribution rougher or smoother
0
Gaussian Kernel and Feature Space
6
Empirical PDF from Empirical CDF
5
How to interpret the bandwidth value in a kernel density estimation?
2
How to Calculate a Simple Case Kernel Density?
5
Bayesian updating of nonparametric estimate of distribution
3
Kernel Density Estimation for a Discrete Variable
2
How to learn a continous distribution incrementally?
3
Estimating Distributions of Weighted Data
See more linked questions