Are Skewness and Standard deviation independent from each other?

It's not possible to say from the information supplied.

A quick few simulations suggests that the two must be at least very nearly independent in the case of normality -- even at small $n$ (where I'd expect dependence to be more obvious), the conditional distribution of the skewness seems to be essentially the same for large and small values of the sample standard deviation for samples from a normal distribution: 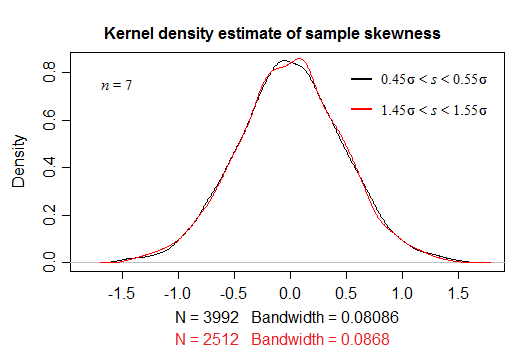 Similar results were obtained at larger sample sizes (n=15) and slicing the other way (holding sample skewness almost-constant and looking at the density of sample standard deviation). Similarly, bivariate plots of the cube root of the variance (to get near-symmetry) against the sample skewness showed no obvious sign of dependence: 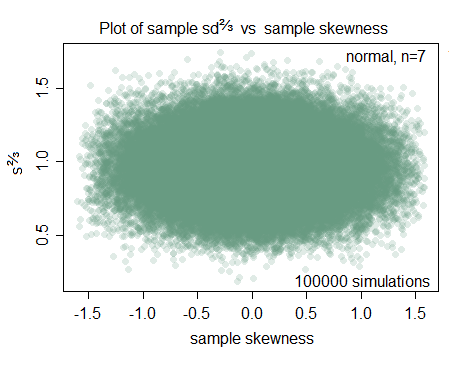 [I imagine there would be some result relating to it for the normal case; I'll try to take a look at Kendall and Stuart next time I am near a copy and see if they mention it.]

By contrast, sampling from some other distributions shows quite clear dependence. Here's an example with uniform sampling: 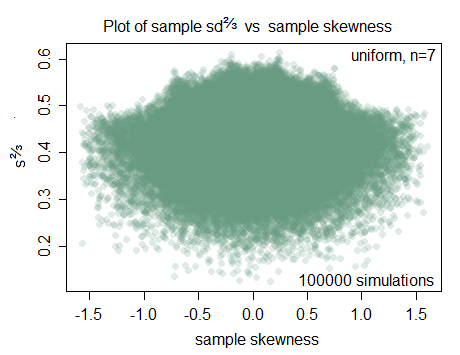 If you're calculating the two statistics on two independent samples they should be independent, however.

Not the answer you're looking for? Browse other questions tagged p-value standard-deviation independence skewness or ask your own question.