I am analyzing wages from an anonymous survey data. The data set is a panel of wages for about 1,000 firms and about 10 years. Each observation contains an individual and his/her wage. The data looks like the follows: 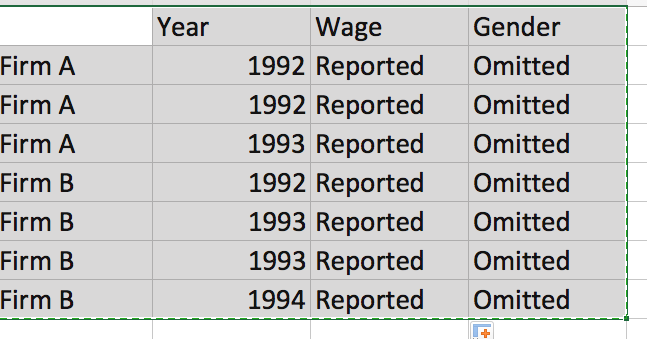 I am interested in whether men are paid higher in the data set. However, I do NOT know whether each individual's gender (omitted in the above table). However, I do know the proportion of the men/women for each firm. For example, I do know that firm A has 66% male workers. Firm B has 75% male workers. I also know that, for most firms, the proportion of men is large than women. I am wondering if there is a way for me to make statistical inferences based on the aggregate statistics (firm level gender information). I am thinking to resample each firm many times based on aggregate statistics but I don't know if I'll get a reasonable asymptotic inferences. Any suggestions (theoretical or operational) will be greatly appreciated!

The only fact you could show on solid grounds is a trend relating percent of women in every firm with mean wage in that firm. This way, you could (for example) see that women tend to work in companies with lower average wages. However, without further assumptions you can't tell if women are paid lower.

One reasonable assumption is that women aren't paid more than men in any company. Although this assumption is very debatable (and in fact it's part of the answer you are looking for), using it may allow you to set an upper bound of women wages and an upper bound of men wages and estimate a lower bound for the proportion of $\frac{\text{women wages}}{\text{average wages}}$.

Not the answer you're looking for? Browse other questions tagged regression econometrics panel-data stata survey or ask your own question.