I am confused about an apparent contradiction between t-test and 1-way ANOVA in one particular case - please suggest a way to think about it.

Suppose I want to compare some parameter between 3 groups, but I am mostly interested in comparison between group 1 and 2. The collected data looks like the graph below (dots: individual data points, lines: means +/- 95% CI). T-test of group 1 versus group 2 is highly significant (p<0.01). But the 1-way ANOVA for all 3 groups is non-significant (p=0.10). Intuitively, one can quite clearly see that groups 1 and 2 are different. But the addition of the group 3 with high variability obscures this fact. I feel that statistics in this case obscures the common sense.

Could you please suggest the way to reconcile the statistical and practical conclusions in this case?

Maybe there is some justification of using t-test instead of ANOVA in such cases? 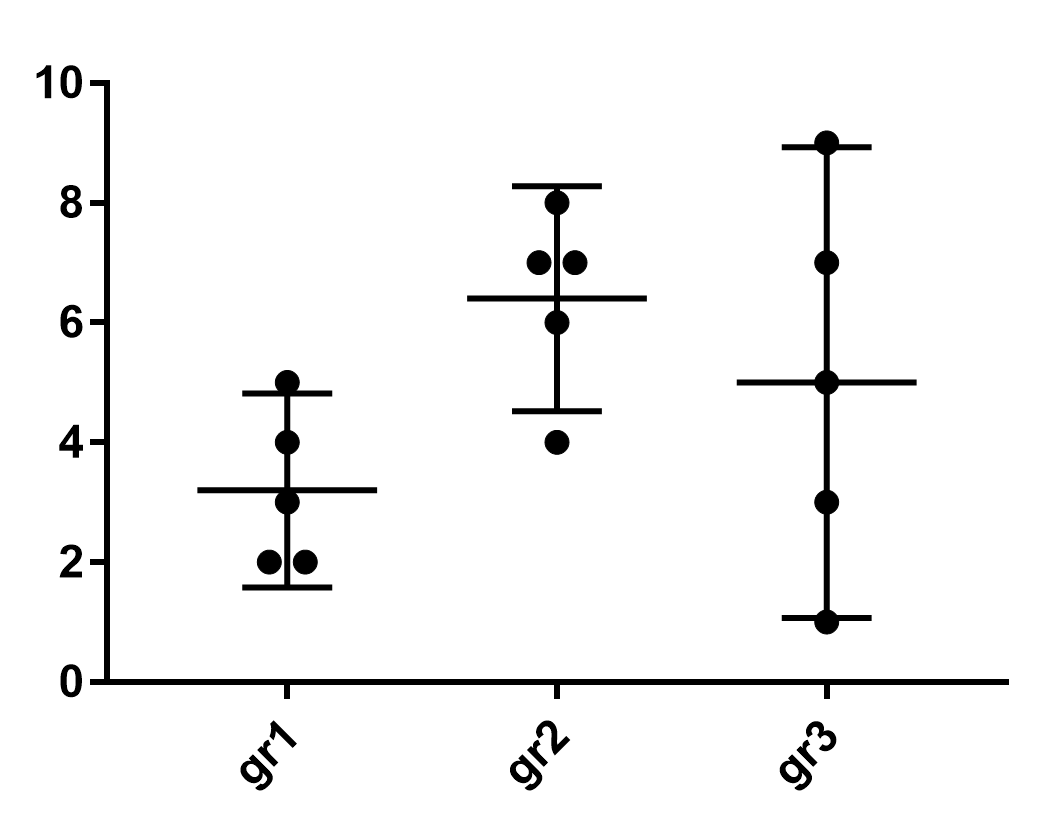 Both Student's t-test and ANOVA work by evaluating the observed differences between means relative to the observed variation. In this case the ANOVA uses an average variation of all three groups, but the t-test uses only two groups. The two groups tested with the t-test have much lower variation than the third group and so the t-test yields a smaller p-value than the ANOVA.

Reconciling the statistical and practical conclusions is usually not something that can be accomplished using the dichotomous interpretation of significant/not significant. Instead, consider the p-values as continuous indices of the strength of evidence in the data about the null hypothesis and statistical model. If the p-value from the primary F-test of the ANOVA is larger than 0.05 then the p-value from the t-test is probably not very small. In that case you do not have very strong evidence against the null hypotheses in either case. Unless you have enough information from outside the experiment in hand to make a reasoned argument that backs up any conclusion that you want to make, you probably should defer any firm conclusion. It's rarely a mistake to run the experiment again!

Especially when you have only one way (therefore no interaction effects) and few groups, the ANOVA is not the only valid tool. You could do t-tests as long as you correct for multiple testing. The commonly used Tuckey's tests are not really post-hoc tests for an ANOVA, but a collection of t-tests that can be performed with or without the ANOVA.

The ANOVA has some assumptions regarding homoscedasticity, normality and sample sizes that for example Welch t-tests do not have. Also, even if significant, the ANOVA can tell you less than t-tests can because it does not compare groups one by one.

I would suggest you use t-tests (Welch t-tests if you are unsure about the assumptions) and do a Bonferroni or better Holm correction for multiple testing.

PS. Are those real data-points on the plot? It looks like someone deliberately constructed a corner case to expose a weakness of ANOVA vs. t-tests

Not the answer you're looking for? Browse other questions tagged anova t-test or ask your own question.