Fit a regression model to the data

A scatter plot is drawn to represent the relationship between response variable y and the predictor variables ‘x’, which is continuous and the indicator variable z which encodes the membership of response to respective group.What should be the regression model equation to fit the data points based on the scatter plot (below) ?

All I can think of is fitting two separate equations for the two populations. Is this approach correct? 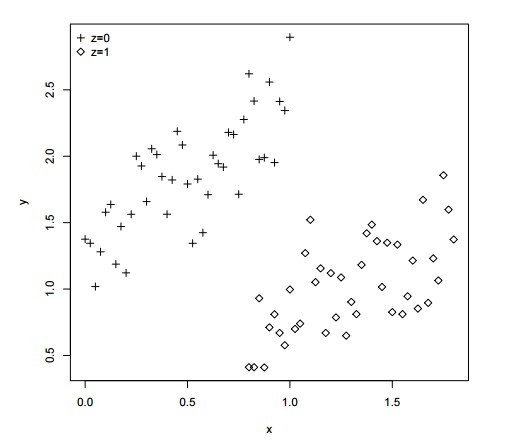 No, you don't need two equations. You can model that in one equation with z being a dummy variable. From the visual, both groups seem to follow a linear relationship with similar slope but varying intercepts. Or else you might conclude, that both are linear but differ slightly in slope and massively in intercept.

Now, far better would be to allow for a different intercept depending on $z$, which is in the following equation

So it depends on your assessment of the situation (background knowledge and plot), but through the power of dummy variables, both groups fit into one equation. With all of this being in one equation, you can then fit one modell to all the data and draw conclusions from which terms are significant or not significant.

In R you would modell that as

This is the case when you should use dummy variable in the regression, because there are two groups following similar trend and only the mean value of the two groups differ.

I use the R programming language in the following example:

Here is the summary from the estimated model: 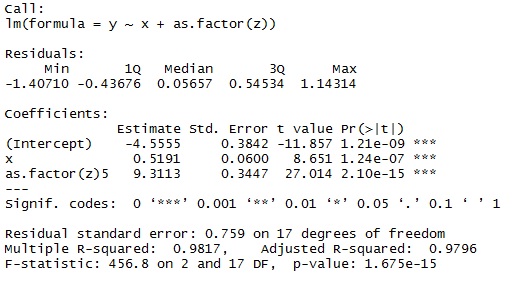 And here is the plot to make it visual: 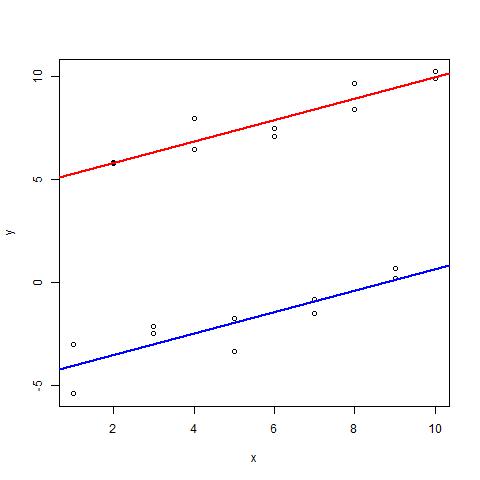 Not the answer you're looking for? Browse other questions tagged regression self-study scatterplot or ask your own question.