The picture below concerns Multidimensional Scaling (MDS), in which there are two terms " Matrix of distance "(δ) and "euclidean distance"(d). I don't understand the difference between them. Can you explain it? 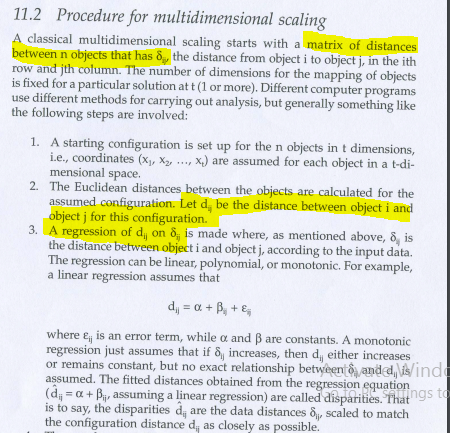 Answered in comments, copied below:

See What is the role of MDS in modern statistics? . The input distances should be better called "dissimilarities" (they are not necessary computed from variables, in some studies respondents are directly asked to "estimate" unlikeness between stimuli). The distances resultant in MDS are the ones observed on the fitted map. The "in-between" state between both are called disparities. – ttnphns

Not the answer you're looking for? Browse other questions tagged terminology distance multidimensional-scaling or ask your own question.

18
What is the role of MDS in modern statistics?