Normalizing a 2D-histogram and getting the marginals

I have a 2D-histogram for two vectors, s1 and s2, generated using the hist3 function in Matlab:

I am normalizing it by making its total volume equal to unity, in the following manner:

Question: Is this correct way to normalize a 2D-histogram?

I have also normalized the 1D-histograms for s1 and s2, as shown below.

Question: How do I get the marginal (1D-)histograms from the normalized 2D-histogram?

I have tried doing this in the following manner:

If I were doing this correctly, I'd expect prob1 to be equal to prob1M. I seem to be on the right track because the bar graphs (below) look similar, but scaled on the vertical axis. Maybe I'm doing the normalizations wrong?

Question: Is normalization still necessary if you get the marginals from a normalized 2D-histogram? Why / Why not?

After normalization, the area of prob1 and prob1M is equal to 1, where area is calculated as:

However, prob1 and prob1M (and prob2 and prob2M) are still slightly different:

Thank you for your suggestions.

Densities can be hard to work with. Whenever you can, calculate with the total probabilities instead.

Usually, histograms begin with point data, such as these 10,000 points: 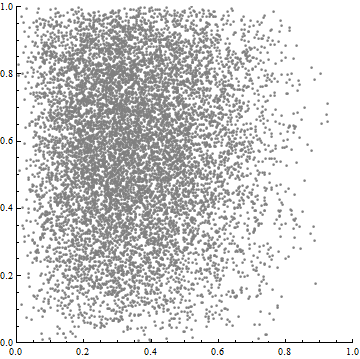 A general 2D histogram tessellates the domain of the two variables (here, the unit square) by a collection $P$ of non-overlapping polygons (usually rectangles or triangles). To each polygon $p$ it assigns a density (probability or relative frequency per unit area). This is computed as

The $\frac{\text{count within}(p)}{\text{total count}}$ part estimates the probability of $p$; when it is divided by the area of $p$, you get the density. 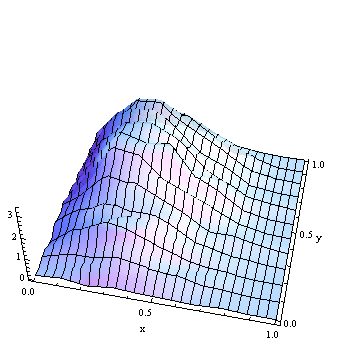 In this 2D histogram, the unit square has been tessellated by rectangles of width $1/26$ and height $1/11$.

2D histograms represent probability (or relative frequency) by means of volume: for each polygon $p$, the product of height and base, or density * area, returns $\frac{\text{count within}(p)}{\text{total count}}$. As a check, the total probability is obtained by summing the volumes over all polygons:

which is equal to unity, as it should. (In the previous image, the histogram heights range from $0$ almost up to $3$; the total volume is $1$.)

To get a marginal density--say, along the x-axis--you slice that axis into bins at cutpoints $x_0 \lt x_1 \lt x_2 \lt \cdots \lt x_n$. (These are allowed to have unequal lengths.) Each bin $(x_i, x_{i+1}]$ determines a vertical slice of the 2D region (consisting of all points $(x,y)$ for which $x_i \lt x \le x_{i+1}$). Let's call this strip $S_i$. As with any (1D) histogram, compute (or estimate) the total probability within each bin and divide by the bin width to obtain the histogram value. The total probability is usually estimated as the the sum of probabilities in polygons intersecting that strip:

Dividing this value by $x_{i+1} - x_i$ gives the value for the histogram of the marginal distribution. Repeat for each bin. 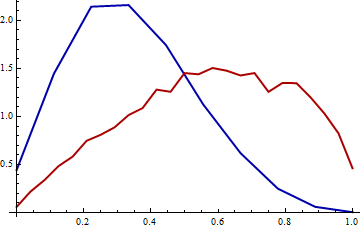 If you normalize a histogram, you don't need to take the bin-width into account. You can look at it like this: When estimating a histogram from continuous data, you basically discretize it first (by setting each value to the bin center which is closest to it) and then generate a discrete histogram for the discretized data. This is simply normalized by dividing by the sum over all its elements.

Since there seems to be some confusion about histograms, I try to make it clearer.

Let's first look at discrete data, e.g. integers from 1 to 10. When you observe $m$ samples from a random variable that takes values between 1 and 10 you can build a histogram. If you normalize that histogram (by dividing it by $m$), you get a discrete probability distribution $p_1,...,p_{10}$. There is no bin width involved, since discrete probability distributions are normalized by summing, i.e. $\sum_{i=1}^{10}p_i = 1$.

When you bin continuous data, what you really do is to (1) discretize it first and (2) bin it. Let's say, we have $m$ samples of a random variable $X$ that takes on values in $[0,10]$. When building a histogram, we first map each value to the nearest bin center, i.e. $1.34$ gets mapped to $1.5$, $0.1$ gets mapped to $0.5$, and so on. Afterwards, we again build a histogram an normalize it. However, now the histogram values have a different meaning. For example, when we look at the first bin for values between $0$ and $1$, then this contains all the probability of the values $X$ that end up in that bin, i.e. if $q$ is the true underlying density, then $p_{1} = \int_0^1 q(x) dx$. Therefore, you the value of the normalized histogram already implicitly contains the bin-width. Furthermore, there is really nothing to integrate, since the histogram runs again over discrete values, i.e. $0.5, 1.5, ..., 9.5$.

What this does is to approximate the true density by a pieceswise constant function.

If you want to estimate mutual information, you can use the histogram values itself, without bin-width. For a continuous density you have $p_i = \int_{ith\:bin} q(x)dx = \Delta \cdot \xi_i$ where $\xi_i$ is a value from the bin such that the equality holds. Since you can write it as a product, the bin-width in the quotient cancels and the sum converges to the Riemann integral for the mutual information.

Not the answer you're looking for? Browse other questions tagged distributions matlab histogram marginal or ask your own question.

0
Why do we use density scale when constructing histograms with unequal class widths?
164
What intuitive explanation is there for the central limit theorem?
4
Estimating the mutual information for two signal samples
2
Normalize histogram with different bin width?
2
Confusion related to histogram density estimation
-3
What is that bar chart called?
1
Does the y-axis of a histogram have to be frequency?

8
How to compare joint distribution to product of marginal distributions?
0
Quantifying Change in a Histogram Valued Timeseries
5
Why are histograms often filled?
3
Python: “Normalizing” kde, so it always lines up with histogram
0
Quantifying the similarity or overlap between two discrete probability histograms