In inferential statistics, is the noncentrality parameter of the F-distribution simply the F-value 'in the population'?

I'm writing functions (in R) that allow working with the $\omega^2$ distribution (the effect size for analysis of variance; the less biased alternative to $\eta^2$). Not being a mathematician or statistician, I do this by converting between $\omega^2$ and $F$ and vice versa (only working on the oneway anova scenario so far).

This works well so far (functions implemented in package userfriendlyscience 0.5-1, see ?pomegaSq if anybody runs into this question because they need those functions) but now I want to add the noncentrality parameter.

For the $t$-distribution, the noncentrality parameter is equal to the $t$-value corresponding to the expected effect in the population (I used the same trick for a Cohen's $d$ distribution). This was simple enough for me to could play around with to be pretty sure that's how it works.

However, for the $F$-distribution, I'm not certain enough that here, the noncentrality parameter is indeed also the relevant $F$-value. For example, assuming $N=100$ participants, $k=3$ groups, and an effect size of $\omega^2 = .06$ (i.e. a 'medium' effect), is it true that the noncentrality parameter of the corresponding $F$-distribution (from which the $F$-value of any given sample of $N=100$ is drawn) is equal to:

(This function is again from userfriendlyscience)

Or, in a formula:

(assuming this formula is correct; it was derived by a colleague of mine who is in fact a statistician)

If this is correct, then that would mean that this would work: 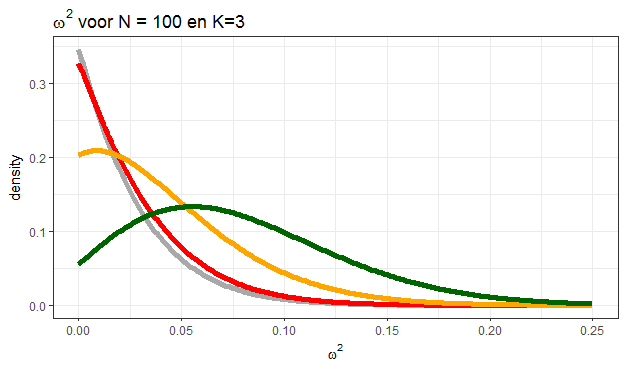 Does anybody know whether the crucial assumption in this procedure (the noncentrality parameter of the $F$-distribution is the expected value of $F$) is correct?

Browse other questions tagged power inference f-distribution non-central or ask your own question.

1
Inferential statistics for vector of percentages
0
Different results for noncentrality parameter (formula vs. G*Power)
5
From expected value of R2 in Regression to expected value of partial eta squared in ANOVA