I'm extremely new to this and stats/regressions in general so apologies if this question is not great or seems too simple. Let me know and I can expand/provide further info.

The study I'm looking at is the relationship between the average proportion of males per occupation over time (2001-2014) and average occupational socioeconomic status score over the same time period. I'm using Excel and Stata.

I have roughly drawn the regression line (what we suspect it will look like) on to the scatter plot just using the draw function in Microsoft Word.

Can anyone suggest a functional form for this line? Or a way of finding out what it could be? So far we have tried:

I have also just been trying a polynomial form:

Where $B_1$ is a negative number. However this is also not working. I've added a screenshot of the data I'm working with.

As you can see we are just experimenting with functions at the moment so any sort of direction would be great. Thanks. 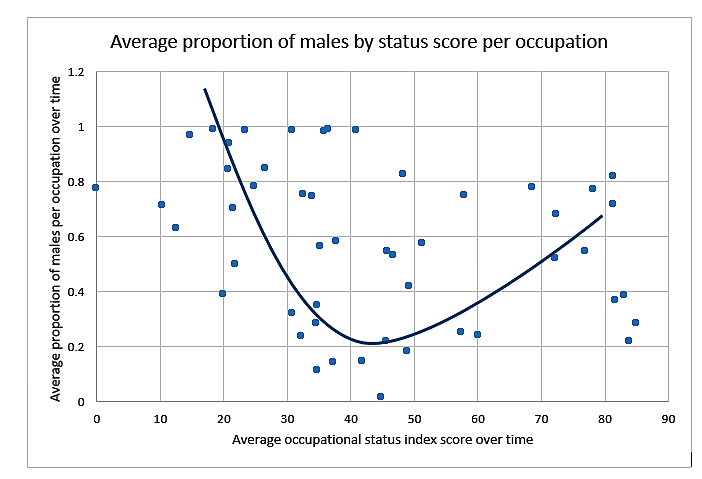 For example, why not fit a nonparametric model of the relationship between y and x? (e.g. spline smoothing, local linear regression/LOESS, or local-mean nonparametric regression like Nadaraya-Watson etc etc)

I'd also suggest you consider that as a proportion approaches 1 or 0 the standard error must tend to become smaller than when it's near the middle because it can't go outside the 0-1 bounds. It may make more sense to work on a transformed scale, whether using a variance-stabilizing transform or (perhaps better) by using a model for the data that takes account of the fat that the response is a proportion. Do you know the denominators for the proportion of males for each point, at least approximately?

Here I fitted a smooth curve (lowess rather than LOESS though the differences aren't that major, and I chose that simply because I could remember the arguments) on the arcsin-sqrt scale then transformed the fit back. Because the variation from linearity was small for most of the range I used a large fraction (5/6) in the width parameter ($f$): 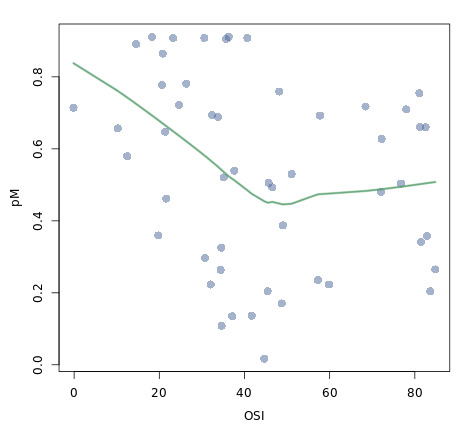 However by the look of it I could probably have gone higher. (If you're wedded to a nonlinear fit, his suggests a broken line or bent cable fit might be visually pleasing, but if you just need a fitted curve some nonparametric fit should be fine)

It would likely have made little difference if I'd directly calculated a lowess smooth on the original proportions (i.e. ignoring the fact that the ones near 1 will have smaller uncertainties). Note that in the absence of information at the time of calculation, I pretended the denominators of the proportions were all similar here.

Given the possibility of getting denominators on the proportions, a GAM based on logistic regression might be highly suitable. You'd certainly avoid the issue of predicting proportions outside [0,1] as in your plot.

Not the answer you're looking for? Browse other questions tagged stata nonlinear-regression excel or ask your own question.