I was plotting a 2D illustration of a simple logistic regression model, which takes two variables into account. The plot shows the datapoints in terms of the two variables in addition to the decision boundary. I am using R software to do that. I have followed some tutorials (such as this one on the Slender Means blog) and was able to plot the decision boundary and the datapoints successfully.

Now we can use the coefficients to plot a separating line in height-weight space.

Let’s plot the data, color-coded by sex, and the separating line. 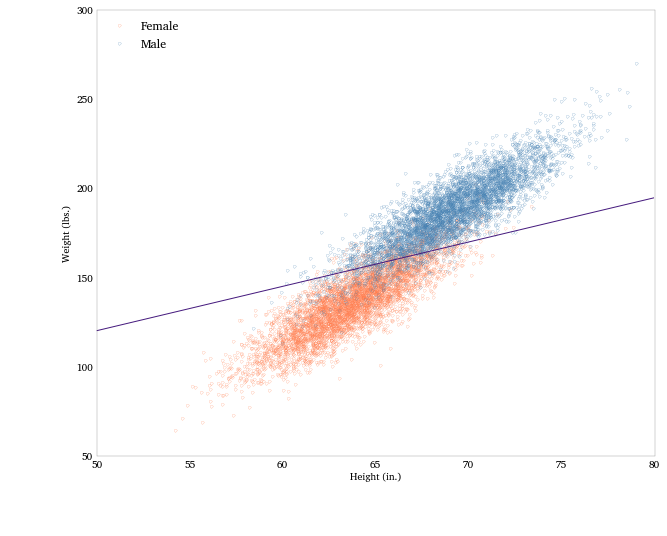 This is actually straightforward. We think of statistical models specifying a conditional response distribution, which is stochastic, but once you are working with the fitted model, it is just a deterministic function. In this case, a logistic regression model specifies the conditional parameter $\pi$ that governs the behavior of a binomial distribution. That is:
$$ \ln\bigg(\frac{\pi}{(1-\pi)}\bigg) = \beta_0 + \beta_1X_1 + \beta_2X_2 $$ With respect to assigning predicted classes, the most intuitive thing to do is call an observation a 'success' if $\hat\pi_i>.5$ or a 'failure' if not. (Note that using $.5$ as your threshold will not necessarily maximize the accuracy of a given model, and that any conversion from predicted probabilities to predicted classes throws away a lot of information—probably unnecessarily.) Using $.5$ on the probability scale corresponds to using $0$ on the log odds (linear) scale. If we only want to know the set of all points in the $X_1$, $X_2$ space that correspond to a predicted log odds of $0$, we can set the fitted model equal to $0$ and then algebraically rearrange the equation to make one variable a function of the other. (In the example, weight as a function of height.) That's just algebra. Once you have that, you can plot the decision boundary on the $X_1$, $X_2$ (height, weight) plane.

If I turn my attention to predicting cancer risk for a participant of a particular age, say 45, then the model simplifies as the following:

Where for this conditional logit model, $\beta_0 + \beta_1 45$ functions like a predicted intercept.

Not the answer you're looking for? Browse other questions tagged r logistic generalized-linear-model data-visualization binary-data or ask your own question.

0
Support Vectors Not Falling on Margin Lines for e1071 and kernlab packages in R?
7
Does the slope of a regression between observed and predicted values always equal the $R^2$ of the original model?
6
How to read the Interaction effect in multiple linear regression with continuous regressors?
4
How to predict & plot quasipoisson GLM in R
3
How to make a regression plot more insightful and engaging to an end user
1
Logistic regression decision boundary