I have analysed several dimensions in a survey. Each part of the survey represents a theoretical dimension and is analysed with factorial analysis.

I want to use scores from factor analysis to do a classification.

To my experience factor rotation does not improve classification accuracy. Please report your results.

Caution: I'm assuming that when you said "classification", you are rather referring to cluster analysis (as understood in French), that is an unsupervised method for allocating individuals in homogeneous groups without any prior information/label. It's not obvious to me how class membership might come into play in your question.

I'll take a different perspective from the other answers and suggest you to try to do a data reduction (through PCA) of your $p$ variables followed by a mix of Ward's hierarchical and k-means clustering (this is called mixed clustering in the French literature, the basic idea is that HC is combined to a weighted k-means to consolidate the partition) on the first two or three factorial axes. This was proposed by Ludovic Lebart et coll. and is actually implemented in the FactoClass package.

The advantages are as follows:

In this case, no rotation is supposed to be applied to the principal axes. Considering a subspace with q < p allows to remove random fluctuations which often make the variance in the p - q remaining axes. This can be viewed as some kind of "smoothing" on the data. Instead of PCA, as I said, you can use Multiple Correspondence Analysis (MCA), which is basically a non-linear PCA where numerical scores are assigned to respondents and modalities of dummy-coded variables. I have had some success using this method in characterizing clinical subgroups assessed on a wide range testing battery for neuropsychological impairment, and this generally yields results that are more or less comparable (wrt. interpretation) to model-based clustering (aka latent trait analysis, in the psychometric literature). The FactoClass package relies on ade4 for the factorial methods, and allows to visualize clusters in the factorial space, as shown below: 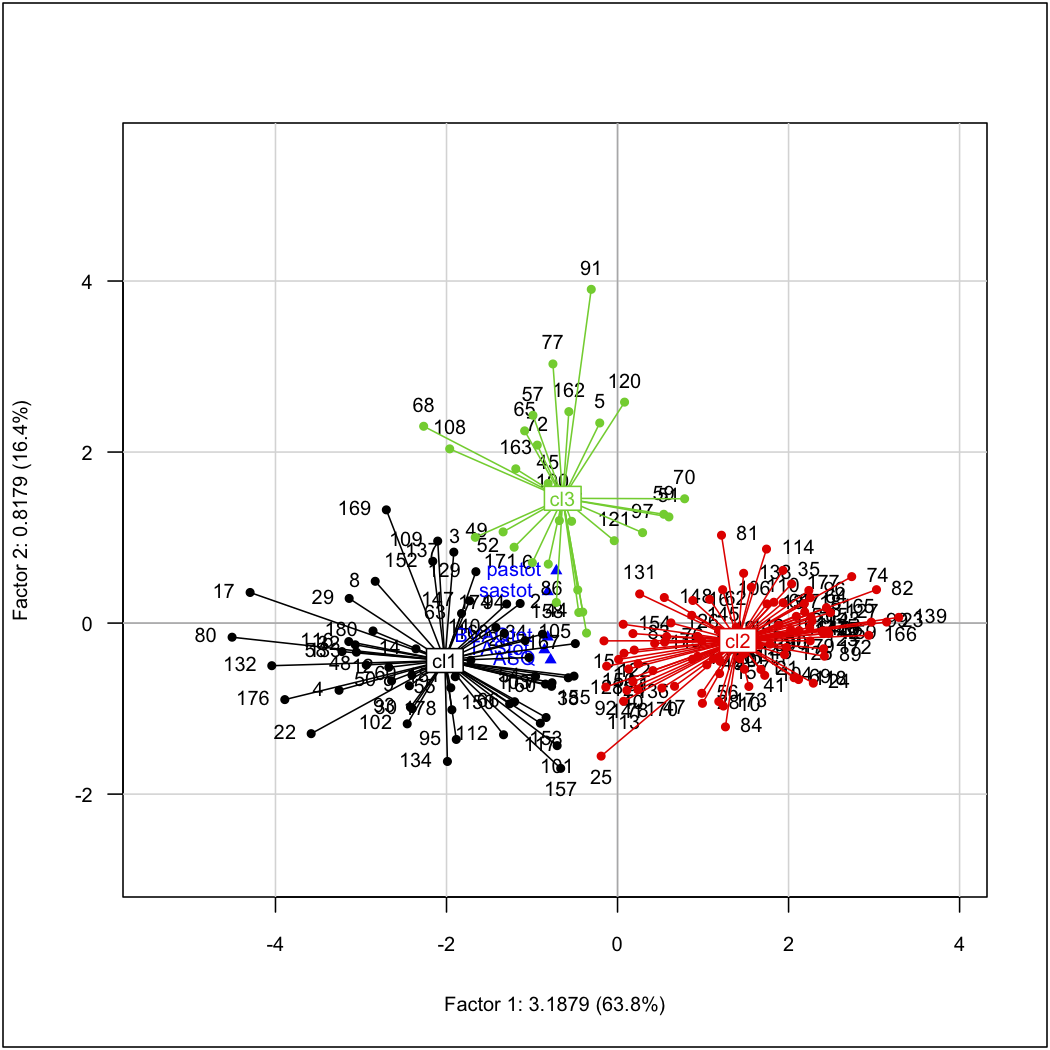 Now, the problem with so-called tandem approach is that there is no guarantee that the low-dimensional representation that is produced by PCA or MCA will be an optimal representation for identifying cluster structures. This is nicely discussed in Hwang et al. (2006), but I'm not aware of any implementation of the algorithm they proposed. Basically, the idea is to combine MCA and k-means in a single step, which amounts to minimize two criteria simultaneously (the standard homeogeneity criterion and the residual SS).

Not the answer you're looking for? Browse other questions tagged classification clustering factor-analysis psychometrics .

4
Looking for a hierarchical-clustering method for multiple data types
4
Do correlations relate to PCA eigenvectors and can PCA be used for clustering?