Statistical significance of difference between distances

I have over 3000 vectors on a two-dimensional grid, with an approximately uniform discrete distribution. Some pairs of vectors fulfil a certain condition. Note: the condition is only applicable to pairs of vectors, not to individual vectors. I have a list of about 1500 such pairs, let's call it group 1. Group 2 contains all other vector pairs. I want to find out if the distance between vectors in a pair in group 1 is significantly smaller the average distance between two vectors. How can I do that?

The question of "significantly" different always, always presupposes a statistical model for the data. This answer proposes one of the most general models that is consistent with the minimal information provided in the question. In short, it will work in a wide array of cases, but it might not always be the most powerful way to detect a difference.

Three aspects of the data truly matter: the shape of the space occupied by the points; the distribution of the points within that space; and the graph formed by the point-pairs having the "condition"--which I will call the "treatment" group. By "graph" I mean the pattern of points and interconnections implied by the point-pairs in the treatment group. For instance, ten point-pairs ("edges") of the graph could involve up to 20 distinct points or as few as five points. In the former case no two edges share a common point, whereas in the latter case edges consist of all possible pairs between five points.

(It is noteworthy that this approach will work, with only minor modifications, with any distance or indeed any quantity whatsoever associated with every possible point pair. It will also work for any summary of the distances, not just the mean.)

To illustrate, here are two situations involving $n=100$ points and $28$ edges in a treatment group. In the top row the first points in each edge were randomly chosen from the $100$ points and then the second points of each edge were independently and randomly chosen from the $100-1$ points different from their first point. All together $39$ points are involved in these $28$ edges.

In the bottom row, eight of the $100$ points were chosen randomly. The $28$ edges consist of all possible pairs of them. 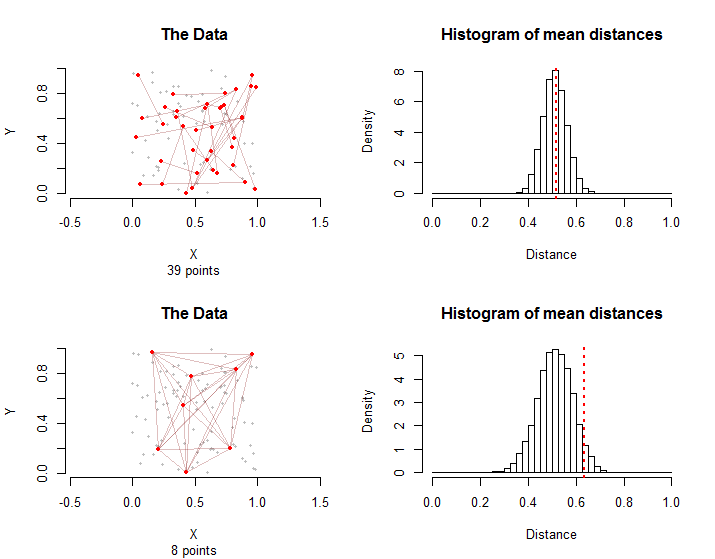 The sampling distributions differ: although on average the mean distances are the same, the variation in mean distance is greater in the second case due to the graphical interdependencies among the edges. This is one reason no simple version of the Central Limit Theorem can be used: computing the standard deviation of this distribution is difficult.

Here are results comparable to the data described in the question: $n=3000$ points are approximately uniformly distributed within a square and $1500$ of their pairs are in the treatment group. The calculations took only a few seconds, demonstrating their practicability. 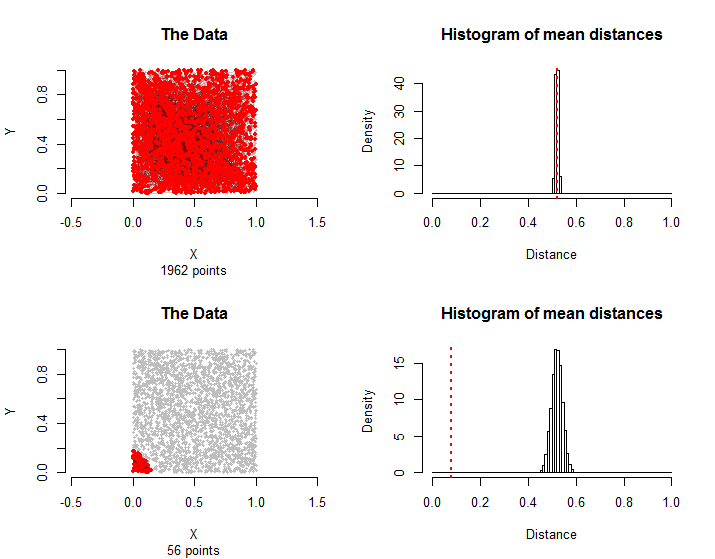 The pairs in the top row again were chosen randomly. In the bottom row, all the edges in the treatment group use only the $56$ points closest to the bottom left corner. Their mean distance is so much smaller than the sampling distribution that this can be taken as statistically significant.

This is the R code used to create the illustrations.

Not the answer you're looking for? Browse other questions tagged statistical-significance t-test sample-size spatial distance or ask your own question.