I am looking for a family of distributions with support on the list above governed by some parameter alpha so that:

This is is very similar to the geometric distribution, but there are some notable differences:

This is basically just an appropriately normalized truncated geometric distribution, and it is also related to the Softmax function. In the special case of $\alpha=0$, use the convention $0^0 = 1$. Note that the denominator can always be written in a simple closed-form expression. For $\alpha < 1$ it takes value $\frac{1-\alpha^n}{1-\alpha}$, and for $\alpha=1$ it takes value $n$.

With $\alpha=1$, it is clear that this just assigns equal probability to each element. As $\alpha\rightarrow 0$, this approaches giving all the probability mass to the first element.

In a list with 10 elements, the roughly exponential decrease you requested is clear with $\alpha=0.5$:

The following plots how the probability of the first element being selected changes based on $\alpha$, using a list of length 10. 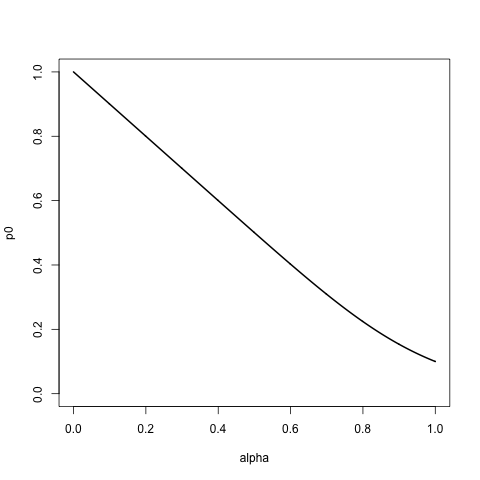 I'll try to build an example from first principles.

Here's an option for the curve:

Not the answer you're looking for? Browse other questions tagged distributions sampling discrete-data or ask your own question.

4
Softmax variant based on rank of vector indices