In what situation would Wilcoxon's Signed-Rank Test be preferable to either t-Test or Sign Test?

After some discussion (below), I now have a clearer picture of a focused question, so here is a revised question, though some of the comments might now seem unconnected with the original question.

It seems that t-tests converge quickly for symmetric distributions, that the signed-rank test assumes symmetry, and that, for a symmetric distribution, there is no difference between means/pseudomedians/medians. If so, under what circumstances would a relatively inexperienced statistician find the signed-rank test useful, when s/he has both the t-test and sign test available? If one of my (e.g. social science) students is trying to test whether one treatment performs better than another (by some relatively easily interpreted measure, e.g. some notion of "average" difference), I am struggling to find a place for the signed-rank test, even though it seems to generally be taught, and the sign-test ignored, at my university.

As we move to heavier-tailed distributions (while still avoiding overly-peaky ones), the t will tend to perform relatively worse, while the sign-test should improve somewhat, and both sign and signed-rank will outperform the t in detecting small effects by substantial margins (i.e. will require much smaller sample sizes to detect an effect). There will be a large class of distributions for which the signed-rank test is the best of the three.

Here's one example -- the $t_3$ distribution. Power was simulated at n=100 for the three tests, for a 5% significance level. The power for the $t$ test is marked in black, that for the Wilcoxon signed rank in red and the sign test is marked in green. The sign test's available significance levels didn't include any especially near 5% so in that case a randomized test was used to get close to the right significance level. The x-axis is the $\delta$ parameter which represents the shift from the null case (the tests were all two-sided, so the actual power curve would be symmetric about 0). 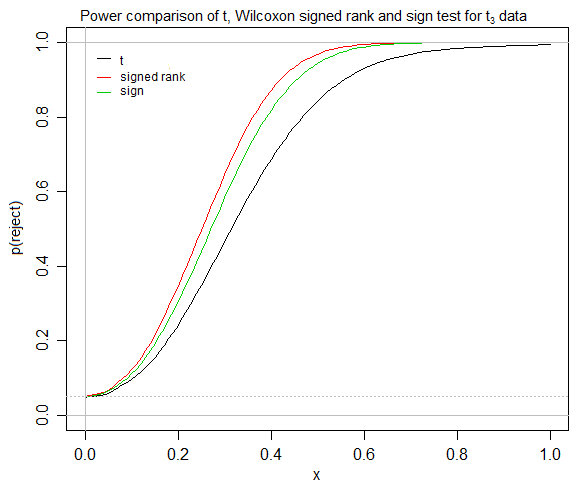 Not the answer you're looking for? Browse other questions tagged hypothesis-testing t-test paired-data wilcoxon-signed-rank sign-test or ask your own question.

11
How to choose between sign test and Wilcoxon signed-rank test?
2
How to graph Wilcoxon test power R