GAM with the negative binomial distribution: why do predictions no match with original values? [closed]

From capture data, I would like to assess the effect of longitudinal changes in proportion of forests on abundance of skunks. To test this, I built this GAM where the dependent variable is the number of unique skunks and the independent variables are the X coordinates of the centroids of trapping sites (called "X" in the GAM) and the proportion of forests within the trapping sites (called "prop_forest" in the GAM):

Quoted from p.159 of mgcv package manual, or the "Details" session of ?predict.gam:

Note that, in common with other prediction functions, any offset supplied to gam as an argument is always ignored when predicting, unlike offsets specified in the gam model formula.

You may want to use

You should also know that when you have type = "terms", offset will never be included regardless how you specify it. Here is a thread on Stack Overflow: mgcv: predict.gam() gives different results for type = “terms” and type = “response”.

Copy of my response to identical cross-posted question on Rhelp:

You have an offset that is not described. And gam suppresses the Intercept. These would seem to be likely sources of confusion. For the best answers either on Rhelp or on CrossValidated.com you should be offering a working example. It's not our responsibility to build these for you.

I found that others had included offsets in their models and then had Rhelp questions about prediction. I haven't reviewed these candidates but perhaps you can find a useful one in this modest listing that comes up from the MarkMail search engine: 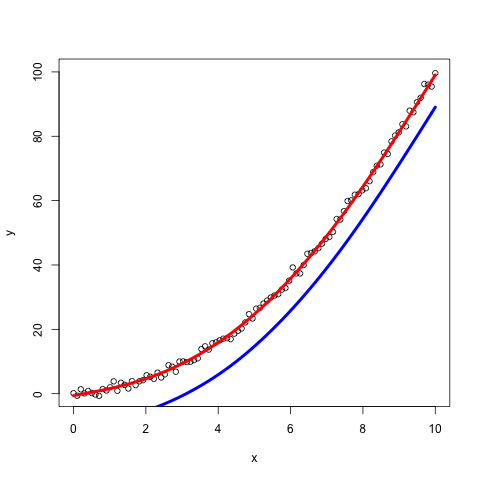 This is what the author of mgcv provided as background and advice on Rhelp:

"Note that, in common with other prediction functions, any offset supplied to ‘gam’ as an argument is always ignored when predicting, unlike offsets specified in the gam model formula."

Not the answer you're looking for? Browse other questions tagged r generalized-additive-model or ask your own question.

1
Why do gam predictions not match gam smooth?
2
F-test differences Stata and R
2
Different regression coefficients in R and Excel
2
Why does my visreg plot not match my partial effect plot for GAM?