What is meant by the statement- “Histograms plot binned quantitative data”?

The problem lies especially in the word-"binned". I've tried to consult the dictionary but it doesn't gives a satisfactory result.

I came across this while I was reading the difference between histogram and bar graph.

In a histogram you typically plot the values of a variable on the x-axis while plotting the frequency/count of the variable's values on the y-axis.

Especially with continous variables it is not very likely that you have the exact same value several times, rather you have similar values or values within a certain range (e.g. 1 to 1.5) that occur more than once.

Binning, thus, simply means that instead of plotting the count of each and every single observed value of a variable, you take ranges or bins of that variable and plot the frequency/count pertaining to values in that bin.

In statistics, a histogram is often considered to be not a bar chart. (The term bar chart seems more common than, say, bar graph or bar plot, but I won't argue for one rather than another: feel free to follow personal or collective taste.) It's hard for me to work out exactly why this is said. It could be just a convention handed down: we have a long-established term (histogram was one of Karl Pearson's coinages) and specific rules that should be used. For example, if bins (classes, intervals) are of unequal width, then arguably only showing some kind of density that scales for those varying widths makes sense. But that still doesn't explain the denial to me. I detect a whiff of academic snobbery in denying that histograms are bar charts. Bar charts are, after all, often taught at an early age and their use by academics, researchers, or students in papers or texts is often considered indicative of limited, low-level analyses.

But I'd argue, and I doubt that I am alone, that any bar chart showing frequencies for a discrete variable is also a histogram. Conventionally, gaps are left to underline that the scale is discrete. If the bars shrink to spikes, many might demur in calling such plots either histograms or bar charts, but again that seems a matter of conventional usage rather than logic. Naturally, or arguably, there is no harm in using a simple evocative term: I've used the term "spike plots" and it is echoed in (for example) Stata's spikeplot command: see documentation here.

As already implied, I would be happy also to regard a histogram showing a continuous distribution by touching bars as a kind of bar chart. But watch out: if you follow that usage, you might be regarded as ignorant, or a little less bluntly, as just not having learned a standard term.

Either way, bin is a common word for each class or interval used on a histogram, or more generally in any grouping of a distribution into disjoint intervals. General-purpose dictionaries seem slow in catching that usage, which seems to have become increasingly common in recent decades. I think I first encountered it in J.W. Tukey. 1977. Exploratory data analysis Reading, MA: Addison-Wesley. The earliest use I can recall was by the statistically-minded geologist W.C. Krumbein in the 1930s.

(I'd add a precise reference later if I can find it again. Conversely, earlier references would be welcome.)

A histogram is a graphical representation of the estimated distribution of a variable (usually continuous). It consists of numbers for bins represented as bars.

Each bin is defined by an interval. The bar height for each bin represents the number of values that lies in the corresponding interval. 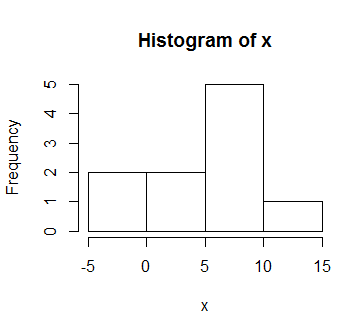 Not the answer you're looking for? Browse other questions tagged terminology histogram definition barplot or ask your own question.

3
Does the samples mean and the histogram mean have to be the same?
1
Statistical terminology: Is my wording correct?
5
How to add a third variable to a bar plot?
4
What is the best ratio between width and height in a Bar Chart?
1
What is the purpose of multiplying by the difference between the midpoints of two bins in this recipe?
1
Matlab difference between normalized histogram and pdf
3
What is collinearity and how does it differ from multicollinearity?