What is the explanation of the difference caused by the order of variables in anova for the concrete example in R?

I wonder the real reason behind the difference in results of the two anovas that use the same covariates. However, the results are different.

?anova help file is not explanatory enough about what is going on. The similar SOF questions does not handle the situation with a concrete example like this. The variables in the regressions seem to be continuous variables (covariates). It seems the variable order is important. But, what does that order mean? What can be inferred from the above two anovas? Any idea?

When you call anova on an lm model fit, under the hood you are really using ?anova.lm, which according to the documentation "gives a sequential analysis of variance table for that fit." This is a type I ANOVA, where order of the variables matter.The term abs in your second example only represents the unique portion of the regression explained given the previous two variables.

You can perform type II ANOVA using drop1(). Here order doesn't matter, thus each main effect can be understood as the individual contribution of that predictor:

I like to understand linear regression in terms of its computation. A linear model is computed by QR factorization, giving a number of "effects" on the rotated plane. You can refer to What is the “effects” returned by aov and lm? for details.

"Effects" is the key for generating ANOVA table:

Note, effects are already different, due to order of terms. Two models are equivalent, so they have the same residual variance:

ANOVA table and F-statistic can be compute as:

To this stage, you should realize that the difference in "effects" explains why ANOVA table is different. lm performs non-pivoted QR factorization, hence is sensitive to term orders. QR factorization for a matrix X is like a "Gram-Schmidt" process. If you have 2 columns linearly correlated, then reversing these two columns will make QR factorization different.

Now have a look at your data: 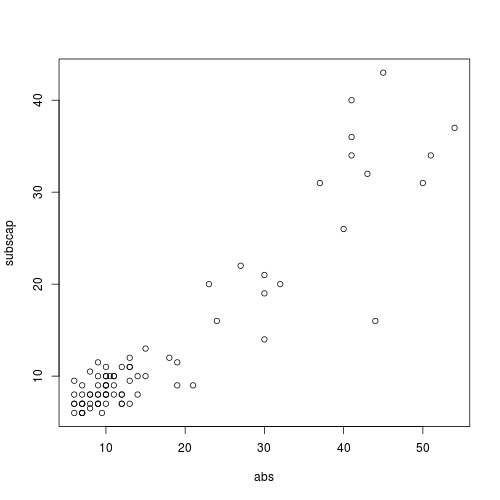 Isn't this a linear relationship?

Not the answer you're looking for? Browse other questions tagged r regression anova manova or ask your own question.

65
How to interpret type I, type II, and type III ANOVA and MANOVA?
10
Why do p-values change in significance when changing the order of covariates in the aov model?