I am learning reinforcement learning from David Silver's open course and Richard Sutton's book. While I enjoy the course and the book much, I am currently confused in $\epsilon$-greedy policy improvement.

which is proved by 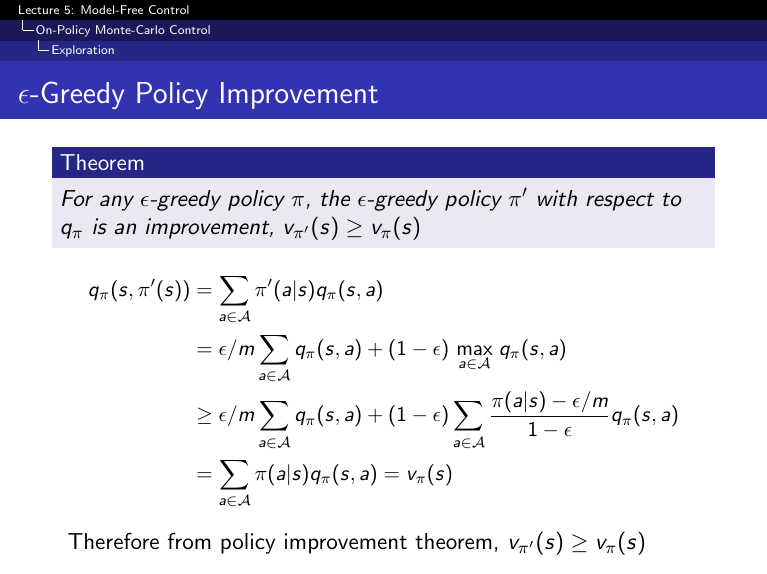 where the inequality holds because the $\max$ operation is greater than equal to an arbitrary weighted sum. (m is the number of actions.)

However, the theorem does not make sense to me, because if $\epsilon\approx 1$, what the theorem implies is that an (almost) random policy would be better than the current one.

Could anyone verify my understanding or shed more light in the theorem?

Ok! If you remember generalized policy iteration, the idea is a policy $\pi$ is first evaluated $v_\pi(s)$ and then improved, into $\pi'$, by acting greedily with respect to our original policy evaluation: $\pi' \rightarrow greedy(v_\pi(s))$. The theorem basically states that acting $\varepsilon$-greedy $still$ will result in policy improvement i.e. a policy with greater reward $v_{\pi'}(s) \geq v_\pi(s)$. The theorem works this out in reverse.

Line 1 left-side: we evaluate our improved policy, $\pi'$, by an action-value function (instead of a value function) with respect to our original policy: $q_\pi(s,\pi'(s)).$

What is crucial to understand is that generalized policy iteration has multiple iterations of evaluation and improvement. The policy under $\pi$ can be different from $\pi'$(hence the difference in selecting $a_2$ as max) because each were improved under different evaluations. This theorem is essentially saying, "Hey, greedily selecting actions after looking at my last choice of greedily selecting actions will either improve my overall reward or just keep it the same." One subtlety (for understanding line 2) is actually (not approximately) $\sum_{a \in A}\pi'(a|s)q_{\pi'}(s,a) = v_{\pi'}(s).$

Reinforcement learning is fairly new to me, but hopefully this is helpful. Firstly, some general remarks.

The $\epsilon$-Greedy policy improvement theorem is the stochastic extension of the policy improvement theorem discussed earlier in Sutton (section 4.2) and in David Silver's lecture. The motivation for the theorem is that we want to find a way of improving policies while ensuring that we explore the environment. Deterministic policies are no good now as there may be state-action pairs that are never encountered under them. One way to ensure exploration is via so called $\epsilon$-soft policies. A policy is $\epsilon$-soft if all actions $a$ have probability of being taken $p(a) \ge \epsilon/N_{a}$, where $\epsilon > 0$ and $N_{a}$ is the number of possible actions.

In both cases of policy improvement the aim is to find a policy $\pi'$ that satisfies $q(s,\pi'(s)) \ge q(s,\pi(s)) = v^{\pi}(s)$, as this implies that $v^{\pi'}(s) \ge v^{\pi}(s)$ and thus we have a better policy. In the deterministic case it was straightforward to arrive at such a policy by construction so it was not necessary to demonstrate that the condition was satisfied. In the stochastic case it is less obvious, and the solution to constructing such a new policy needs to be shown to satisfy the required condition.

Clearly if a policy is e-greedy, then it is $\epsilon$-soft, giving the formulation on the slide. I think the discussion of $\epsilon$-soft policies in the book helps to illuminate the theorem. Potentially they have avoided introducing $\epsilon$-soft in the slides to reduce the amount of new terminology being presented.

Epsilon is defined as the probability of exploration. Exploration is equivalent to picking a random action in action space. This is so that the agent will try out new actions during training, in case these lead to better (future discounted) rewards. If epsilon = 1, the agent will always explore, and never act greedily with respect to the action-value function. Therefore, epsilon < 1 in practice, so that there is a good balance between exploration and exploitation.

"Among epsilon-soft policies, epsilon-greedy policies are in some sense those that are closest to greedy."

The fact that policy is episolon soft ensures that weights are non negative. Note that inequality won't hold if weights can be negative.

David silver slides are bit misleading here as they fail to mention that universe of policies considered here are epsilon soft.

Not the answer you're looking for? Browse other questions tagged reinforcement-learning q-learning or ask your own question.