Sum of Product of Bernoulli and Normal Random Variables

$Z_i$ can also be expressed as a mixture with distribution function

The stars remind us these are repeated convolutions rather than products.

Note that the convolution of $\delta$ merely adds a constant zero and that the convolution $F^{*k}$ is the distribution of a sum of $k$ iid Normal$(\mu,\sigma)$ variables. It therefore is a Normal distribution with mean $k\mu$ and variance $k\sigma^2$. This yields $F_n$ as a mixture of $(1-p)^n$ times a jump at zero (from the $k=0$ term) along with $n$ Normal components. 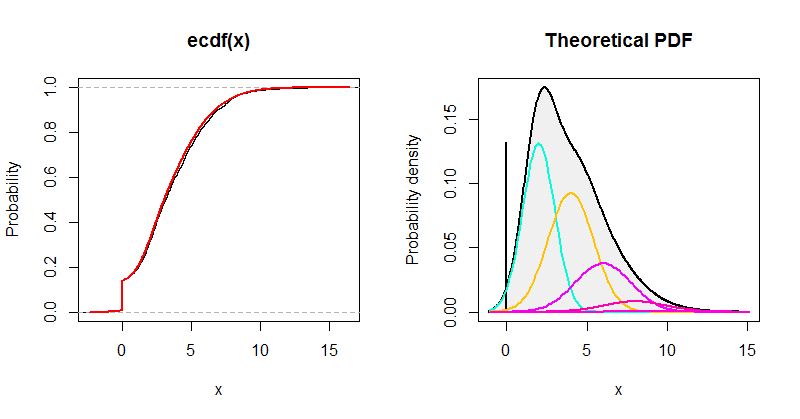 On the left is the empirical cumulative distribution function of $2000$ independent draws of $Z$, in black. (These draws were made by multiplying Normal and Bernoulli variates and then adding them, according to the original description of $Z$.) A plot of $F_n$ is superimposed in red. That they are nearly the same provides support for the formula.

On the right is the continuous part of the $F_n$ (in gray) along with graphs of its five Normal components, each appropriately scaled. The (discrete) contribution from $(1-p)^n$ is depicted merely as a vertical line at zero of height $(1-p)^n$.

Not the answer you're looking for? Browse other questions tagged probability normal-distribution random-variable bernoulli-distribution or ask your own question.