Where is the shared variance between all IVs in a linear multiple regression equation?

For example, if the Venn diagram displayed below (and taken from CV's 'about' page here: https://stats.stackexchange.com/about) were relabeled to be 3 IVs and 1 DV, where would the area with the asterisk enter into the multiple regression equation? 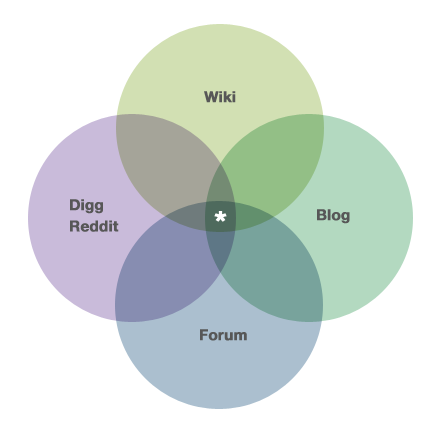 To understand what that diagram could mean, we have to define some things. Let's say that Venn diagram displays the overlapping (or shared) variance amongst 4 different variables, and that we want to predict the level of $Wiki$ by recourse to our knowledge of $Digg$, $Forum$, and $Blog$. That is, we want to be able to reduce the uncertainty (i.e., variance) in $Wiki$ from the null variance down to the residual variance. How well can that be done? That is the question that a Venn diagram is answering for you.

Each circle represents a set of points, and thereby, an amount of variance. For the most part, we are interested in the variance in $Wiki$, but the figure also displays the variances in the predictors. There are a few things to notice about our figure. First, each variable has the same amount of variance--they are all the same size (although not everyone will use Venn diagrams quite so literally). Also, there is the same amount of overlap, etc., etc. A more important thing to notice is that there is a good deal of overlap amongst the predictor variables. This means that they are correlated. This situation is very common when dealing with secondary (i.e., archival) data, observational research, or real-world prediction scenarios. On the other hand, if this were a designed experiment, it would probably imply poor design or execution. To continue with this example for a little bit longer, we can see that our predictive ability will be moderate; most of the variability in $Wiki$ remains as residual variability after all the variables have been used (eyeballing the diagram, I would guess $R^2\approx.35$). Another thing to note is that, once $Digg$ and $Blog$ have been entered into the model, $Forum$ accounts for none of the variability in $Wiki$.

Now, after having fit a model with multiple predictors, people often want to test those predictors to see if they are related to the response variable (although it's not clear this is as important as people seem to believe it is). Our problem is that to test these predictors, we must partition the Sum of Squares, and since our predictors are correlated, there are SS that could be attributed to more than one predictor. In fact, in the asterisked region, the SS could be attributed to any of the three predictors. This means that there is no unique partition of the SS, and thus no unique test. How this issue is handled depends on the type of SS that the researcher uses and other judgments made by the researcher. Since many software applications return type III SS by default, many people throw away the information contained in the overlapping regions without realizing they have made a judgment call. I explain these issues, the different types of SS, and go into some detail here.

The question, as stated, specifically asks about where all of this shows up in the betas / regression equation. The answer is that it does not. Some information about that is contained in my answer here (although you'll have to read between the lines a little bit).

Peter Kennedy has a nice description of Ballentine/Venn diagrams for regression in his book and JSE article, including cases where they can lead you astray.

The gist is that the starred area variation is thrown away only for estimating and testing the slope coefficients. That variation is added back in for the purpose of predicting and calculating $R^2$.

I realize this is a (very) dated thread, but since one of my colleagues asked me this very same question this week and finding nothing on the Web that I could point him to, I thought I would add my two cents "for posterity" here. I am not convinced that the answers provided to date answer the OP's question.

Running a multiple regression of Y on X1 and X2 will produce an r-squared of just a wee bit higher than .36, and both b1 and b2 take on the value of 0.3. Thus, the shared variation in Y is captured in BOTH b1 and b2 (equally).

If you wish to check this empirically, generate a fabricated dataset (...I used a SAS macro named Corr2Data.sas ...) which has the characteristics described above. Check out the b values, the standard errors, and the t-values: you will find that they are exactly as described here.

Not the answer you're looking for? Browse other questions tagged multiple-regression sums-of-squares or ask your own question.

65
How to interpret type I, type II, and type III ANOVA and MANOVA?
12
Intuition behind the names 'partial' and 'marginal' correlations
4
Fitting least squares when number of predictors are larger than instances
4
Using and interpreting type I SOS in three-way ANOVA
4
In regression analysis, How can R^2 represent the total explained variance, if it can be computed from an equation with only unique contributions?
3
Proper order of variables in unbalanced ANOVA
2
In regression, when partitioning SS among predictors, what determines which predictors get the SS that can be attributed to more than one predictor?
1
Unique variance with regression analysis
1
Explaining unique variance in multiple regression models
0
Shared variability "controlled for" in linear regression?
See more linked questions

0
"Wrong Sign" On Regression Coefficients - Hierarchical Multiple Linear Regression
1
How to calculate the shared variance between multiple IVs in predicting DV?
1
Interaction model significant in multiple linear regression
13
How can the sum of two variables explain more variance than the individual variables?
4
In regression analysis, How can R^2 represent the total explained variance, if it can be computed from an equation with only unique contributions?
0
Relative importance of multiple correlated independent variables in logistic regression
1
Strange, symmetric suppression between 3 IVs in multiple regression?