Can somebody offer an example of a unimodal distribution which has a skewness of zero but which is not symmetrical?

In May 2010 Wikipedia user Mcorazao added a sentence to the skewness article that "A zero value indicates that the values are relatively evenly distributed on both sides of the mean, typically but not necessarily implying a symmetric distribution." However, the wiki page has no actual examples of distributions which break this rule. Googling "example asymmetrical distributions with zero skewness" also gives no real examples, at least in the first 20 results.

I can construct a small, arbitrary distribution to make the skewness low. For example, the distribution

yields a skew of $-5.64947\cdot10^{-5}$. But this is a small sample and moreover the deviation from symmetry is not large. So, is it possible to construct a larger distribution with one peak that is highly asymmetrical but still has a skewness of nearly zero?

Consider discrete distributions. One that is supported on $k$ values $x_1, x_2,\ldots, x_k$ is determined by non-negative probabilities $p_1, p_2,\ldots, p_k$ subject to the conditions that (a) they sum to 1 and (b) the skewness coefficient equals 0 (which is equivalent to the third central moment being zero). That leaves $k-2$ degrees of freedom (in the equation-solving sense, not the statistical one!). We can hope to find solutions that are unimodal. 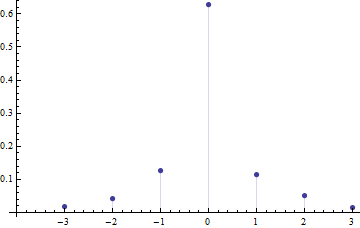 You can see it is asymmetric. 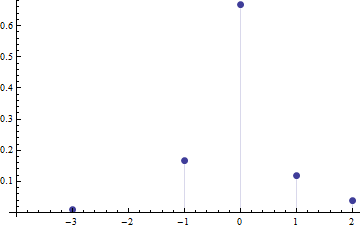 Because the issue keeps coming up, let's give an explicit example with continuous distributions. Peter Flom had a good idea: look at mixtures of normals. A mixture of two normals won't do: when its skewness vanishes, it will be symmetric. The next simplest case is a mixture of three normals.

Mixtures of three normals, after an appropriate choice of location and scale, depend on six real parameters and therefore should have more than enough flexibility to produce an asymmetric, zero-skewness solution. To find some, we need to know how to compute skewnesses of mixtures of normals. Among these, we will search for any that are unimodal (it is possible there are none).

Now, in general, the $r^\text{th}$ (non-central) moment of a standard normal distribution is zero when $r$ is odd and otherwise equals $2^{r/2}\Gamma\left(\frac{1-r}{2}\right)/\sqrt{\pi}$. When we rescale that standard normal distribution to have a standard deviation of $\sigma$, the $r^\text{th}$ moment is multiplied by $\sigma^r$. When we shift any distribution by $\mu$, the new $r^\text{th}$ moment can be expressed in terms of moments up to and including $r$. The moment of a mixture of distributions (that is, a weighted average of them) is the same weighted average of the individual moments. Finally, the skewness is zero exactly when the third central moment is zero, and this is readily computed in terms of the first three moments. 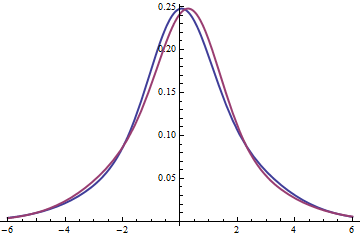 The plots indicate these are unimodal. (You can check using Calculus to find local maxima.)

Here is one I found at https://www.qualitydigest.com/inside/quality-insider-article/problems-skewness-and-kurtosis-part-one.html# which I find nice and reproduced in R: an inverse Burr or Dagum distribution with shape parameters $k=0.0629$ and $c=18.1484$:

My reproduction in R was created with

As this output shows, skewness is not quite zero to four digits for these parameter values. Here is a little optimizer for $k$ and $c$:

Consider a distribution on the positive half of the real line which increases linearly from 0 to the mode and then is exponential to the right of the mode, but is continuous at the mode.

This could be called a triangular-exponential distribution (though it does often look a bit like a shark fin).

Let $\theta$ be the location of the mode and $\lambda$ be the rate parameter of the exponential. 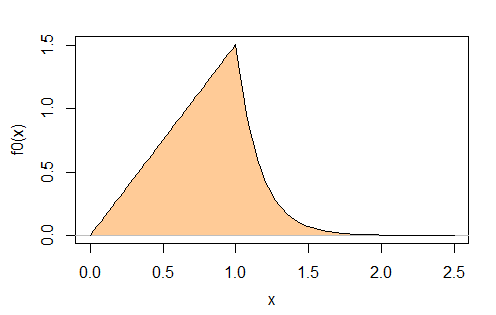 Brizzi (2006)$^{[1]}$ refers to this family of distributions as the "two-face" distribution, and discusses this crossover point where the third-moment-skewness is zero. von Hippel (2005)$^{[2]}$ presents an example that's almost at that crossover point here

The thread Non-normal distributions with zero skewness and zero excess kurtosis? has some asymmetric examples, including a small discrete example and another continuous unimodal one: 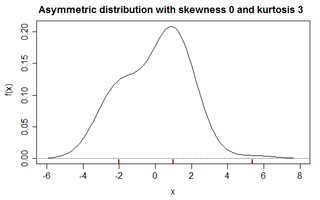 Discrete unimodal distributions - or equivalently, samples - with zero skewness are quite easy to construct, of large or small size.

Here's an example, which you can treat as a sample or (by dividing the raw frequencies by 3000) as a pmf (the 'x' values are the values taken, the 'n' are the number of times that value occurs in the sample): 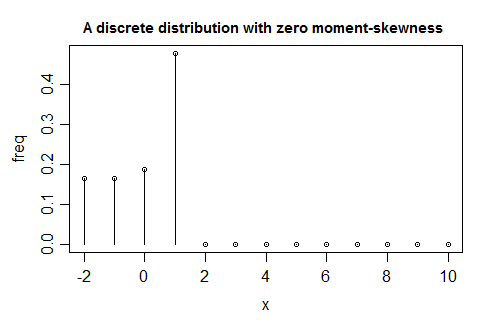 This example is built up from 3-point distributions:

across various values of $c$ between 3 and 10. This parameterized (by $c$) 3-point "atom" has $\sum_i n_ix_i =0$ and $\sum_i n_ix_i^3 =0$, which in turn means that mixtures across various choices of $c$ have zero skewness. (You can't make anything smaller than a distribution across three points that has asymmetry and third central moment zero. A collection of simple pieces over only a few points, such as these make neat building blocks from which larger structures may be made.)

There are all manner of other such "atoms" one can construct, but this example uses only this one kind. To some combination of atoms such as these is added a few symmetrically placed values to fill in remaining holes and guarantee unimodality without destroying the structure of mean and third moment.

The resulting distribution will be unimodal if the PDFs of $Y$ and $Z$ are increasing at the left of $\mu$ (in addition to being zero at the right of $\mu$).

(You did the hard stuff already!)

Not the answer you're looking for? Browse other questions tagged distributions expected-value skewness or ask your own question.

26
Real life examples of distributions with negative skewness
7
Can somebody identify this distribution?
6
Looking for a distribution where: Mean=0, variance is variable, Skew=0 and kurtosis is variable
0
Which distribution has an expected product equal to one?
1
Skewness transformation for one but not the other variable?
3
What is a useful, robust descriptive measure of scale for latency measurements?
5
Skewness of Tweedie distribution
5
Is there any non-gaussian distribution has skewness 0 and kurtosis 3?
0
What's an example where the expectation of product is zero but not conditional mean?