I want to run a regression where the dependant variable (DV) is the amount of funding (in USD) obtained by startups. Naturally the DV contains a lot of zero's (~55%) and has a continuous distribution for y>0.

In general my understanding is that the Tobit model (or a variation of it) is approriate to model this DV.

Although reading and discussing now for months I still struggle to get my head around the exact difference between the standard Tobit (1958) model, the two-part extensions proposed by Cragg (1971) and the Tobit Type 2 model, e.g., represented by Heckmann (1974, 1976, 1979). My current understanding is that all models could be in theory applicable with varying pros and cons and potential reasons why not to use them at all (depending on the exact characteristics of the data set).

Why I excluded the standard Tobit model

For my application I excluded the standard Tobit model as it only allows both processes to be governed by the same variables for which also only one coefficient is reported. Hence, the effect of a certain variable cannot have a different sign in the selection and outcome equation (which is though sometimes the case).

This, however, is not entirely true as Cragg (1971) originally also proposed a double hurdle model where 2 hurdles have to be overcome before positive values of y are observed: "First, a positive amount has to be desired [(i.e., I am a smoker or not)]. Second, favourable circumstances have to arise for the positive desire to be carried out [(i.e., I am a smoker and I have sufficient funds to afford smoking)]".

This paper (which is a great read! Brad R. Humphreys, 2013) and especially one of its key graphics 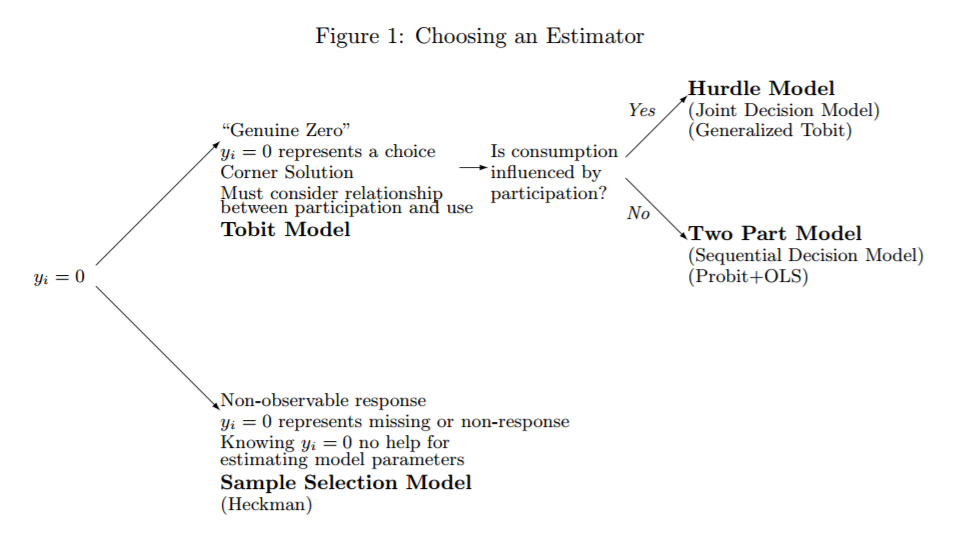 highlights the difference between unobserved zeros (i.e., missing data, companies not looking for funding) and observed zeros (i.e., investors providing funding or not) very well. It also provides guidance on which models to use, but unfortunately, does not provide a solution for data where both types of zeros are present at the same time.

After digging deeper I found two papers that offer a statistical solution to exactly what I am looking for:

Unfortunately I couldn't find any trustworthy implementation in Stata or R (there is a package called mhurdle, but it appears not to be working well with weights and throwing random errors...)

Any comments or further ideas?

Thanks for asking, Mark. In context of my data I ended up using the double hurdle model proposed by Blundell (the first bullet of my suggested solutions). Based on the feedback I received on academic conferences this seems to be a viable approach. I also ended up using the R-package mhurdle. Weights simply do not work - the rest of the code seems to be very solid.

Regarding my specific questions; I do not have a finite answer to all of them, but let me try to summarise what I learnt:

Is my statement about the three models correct? It appears so - yes

Are the sources of zeros the only/main decision criteria? They are certainly not the only decision criteria, but in context of data with a mass point at zero, spending significant time on understanding how the zeros are generated is tremendously important.

What are the key decision criteria I should consider/discuss when deciding about what type of model to use? Besides the obvious questions regarding type of dependent variable and its distribution, the two main questions involving data with a mass point at zero are: Do you want to distinguish your results by the two different stages or is it sufficient to report one set of coeffcients? If so you may use a Tobit model; otherwise you need a two-part model where the discussion about the different sources of zeros comes into play.

Is there more than 'just' the source of the zeros? Yep - there is. At least two: observed/true zeros and unobserved/false zeros (the latter actually being either NAs or so small values that are recoded as 0)

Hope this helps you a bit! Jan

Not the answer you're looking for? Browse other questions tagged model-selection zero-inflation tobit-regression heckman or ask your own question.