I require a solution (Python if possible) to force a polynomial to end at a specific point. I have read the solutions offered here to a similar question but have been unable to get any of these methods working on my data set as they are not defining end points but locations for a polynomial to pass through.

I therefore require a solution to force a polynomial curve to end at a specific location.

To put this in context the example that I need this for is shown in the image below, I require a line of best fit for the data below, the green points represent the raw data and the pink points are the mean of the green points for every x value. The best fit should be a 3rd order polynomial until the data becomes a horizontal linear line. The black line is my current attempt at a line of best fit using np.ployfit(), I have defined the polynomial to only plot until the location where I would then start the linear best fit line but as you can see the tail of the polynomial is far too low and hence I want to force it to end/go through a specific point.

Additional Information Added The rated power of the turbine is 280kW so this is the max power which you can get out of it regardless of how high the wind speed is. There is also a cut in windspeed of 3m/s before this the turbine isn't generating any electricity and a cut out of 25m/s to prevent oil temperatures overheating in the gear box and mechanical failure occurring the turbine shuts down. The data seen plotted below is for a single turbine and the mean wind speed is the average in all directions. SCADA data - Supervisory control and data acquisition is just data that is automatically recorded in this case every ten minutes from the turbines internal sensors and logged in a database. EGen Mean as can be seen plotted on the graph is simply the mean of the electricity generated for each distinct windspeed. It is from these means that I attempted to plot the line of best fit.

I am open to all options to get a nice mathematically sensible best fit as have been banging my head against this problem for too long now. 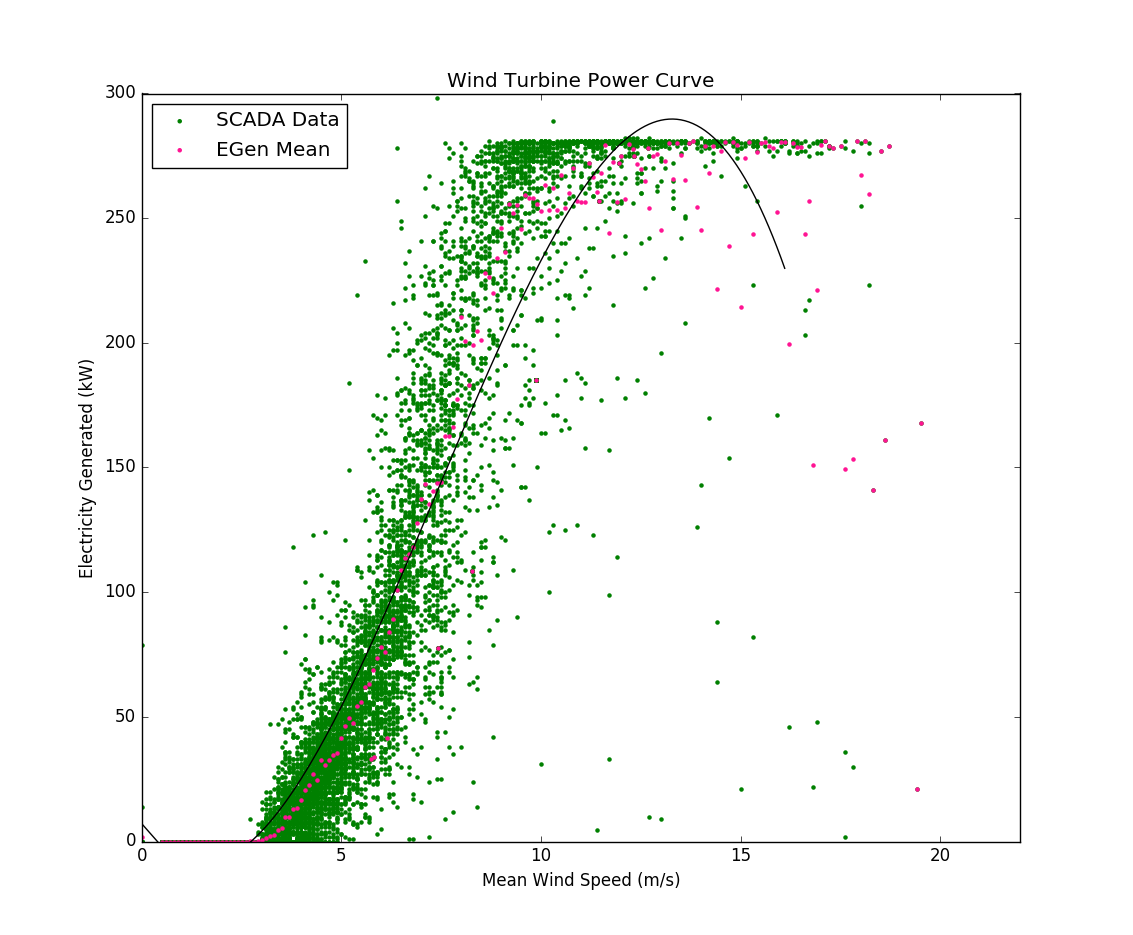 Estimating the power curve of a wind turbine is much more complicated than it looks at first sight, and I don't envy you for having to deal with that :P I'll try to help, but keep in mind that, as confirmed by reading the literature, the correct answer depends a lot on context, and you're the one who knows your turbines better.

So, first of all, as noted in the comments:

So, where do we go from here? My suggestion is to forget about a power curve, add more predictors and concentrate on a power response surface. In this case useful additional predictors are wind direction $D$, temperature $T$, pressure $p$, humidity $H$, turbulence intensity $I$ and wind shear $S$. $T$ and $p$ are usually summarized as just density $\rho$, because it's actually density which goes into the physical law of power generation:

where $C_P$ is the power coefficient and $R$ is the turbine rotor radius. A well-performing approach to estimating the conditional expectation $E[P|V,D,\rho,H,I,S]$ is the kernel method described here:

A kernel plus method for quantifying wind turbine performance upgrades

Basically, let $\{(\mathbf{x_i},y_i)\}_{i=1}^N$ be your database of predictors-power couples. The idea is to use a slightly modified version of the Nadaraya-Watson kernel estimator

Now, in the usual NW estimator, you would obtain the multivariate kernel by simply multiplying univariate Gaussian kernels for each predictor:

However, this model suffers from the curse of dimensionality. The clever solution of the authors is, instead of using the product of 6 univariate kernels, to sum together 4 kernels, each one obtained by multplying together the univariate kernels corresponding to 3 variables, where the first two are always $V$ and $D$, and the third one is one of the remaining four, i.e., $\rho$, $H$, $I$, $S$. They end up with quite a few kernel bandwiths to estimate, which however you can estimate with various metrics, such as for example cross-validation. The only remaining difficulty is that $D$ is a circular variable, thus a Gaussian kernel doesn't make a lot of sense (it doesn't recognize that $D_i=1°$ and $D_i=358°$ are two very close directions). Fix this by using the von Mises kernel:

$\nu$ is the free parameter of the von Mises kernel, to be estimated from data, and $I_0(\nu)$ is the modified Bessel function of order 0.

If you definitely insist on performing univariate regression (which I don't recommend, but as said in the beginning, you're the only one that really knows your data), then you need to at least perform robust regression in order to take into account the heteroskedasticity. A reference:

Let me know what you end up doing, let's say I have personal reasons to be curious :)

Maybe I'm missing something, but there is no such thing as a polynomial with an end point. The x axis goes out to infinity, and the polynomial has a value for every x. As noted, you can force it through any particular (x0,y0), but it will continue to have changing y values at higher x values.

I'm thinking you need at least two functions, one for x < x0, and a different one for x > x0. They can be forced to have the same slope at the crossover point.

Alternatively, if you are OK with doing it all numerically, just apply a moving average filter to generate a smoothed y value for every x. Savitsky-Golay filter functions are pretty easy to use.

Not the answer you're looking for? Browse other questions tagged regression python least-squares scatterplot or ask your own question.

15
Perform linear regression, but force solution to go through some particular data points

7
Predicting daily electricity load - fitting time series
15
Perform linear regression, but force solution to go through some particular data points
1
Regression plot and function for: heavy-tailed probability distribution
2
Normal Probability Plot: oscillation around straight line: polynomial relationship?
15
Why does linear regression use a cost function based on the vertical distance between the hypothesis and the input data point?
84
Line of best fit does not look like a good fit. Why?
0
Is this a correct interpretation of the r correlation coefficient
0
R: Fit regression to asymptotic data