From a statistical perspective: Fourier transform vs regression with Fourier basis

I am trying to understand whether discrete Fourier transform gives the same representation of a curve as a regression using Fourier basis. For example,

Do they convey the same information? Is there a one to one map between the two sets of numbers?

(I would appreciate if the answer is written from the statistician's perspective instead of the engineer's perspective. Many online materials I can find have engineering jargon all over the place, which makes them less palatable to me.)

When you run a Fourier transform, you calculate, for $j=1, \ldots, n$:

For each $j$, taking the square of the complex conjugate gives you the "periodogram:"

The Connection Between the Two

It turns out the connection between the regression and the two periodograms is:

They are strongly related. Your example is not reproducible because you didn't include your data, thus I'll make a new one. First of all, let's create a periodic function: 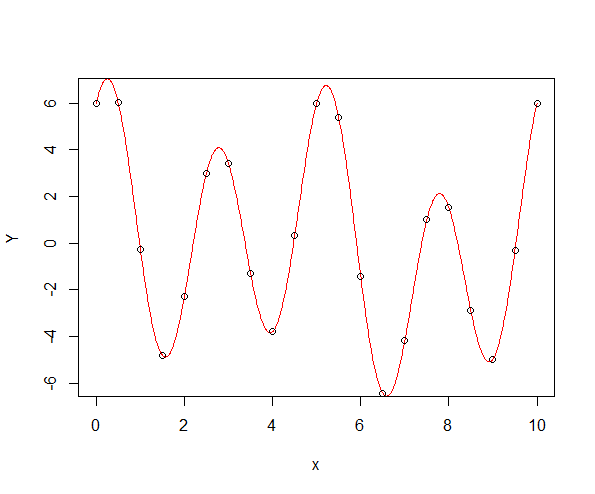 Now, let's create a Fourier basis for regression. Note that, with $N = 2k+1$, it doesn't really make sense to create more than $N-2$ basis functions, i.e., $N-3=2(k-1)$ non-constant sines and cosines, because higher frequency components are aliased on such a grid. For example, a sine of frequency $k\omega$ is indistinguishable from a costant (sine): consider the case of $N=3$, i.e., $k=1$. Anyway, if you want to double check, just change N-2 to N in the snippet below and look at the last two columns: you'll see that they're actually useless (and they create issues for the fit, because the design matrix is now singular). 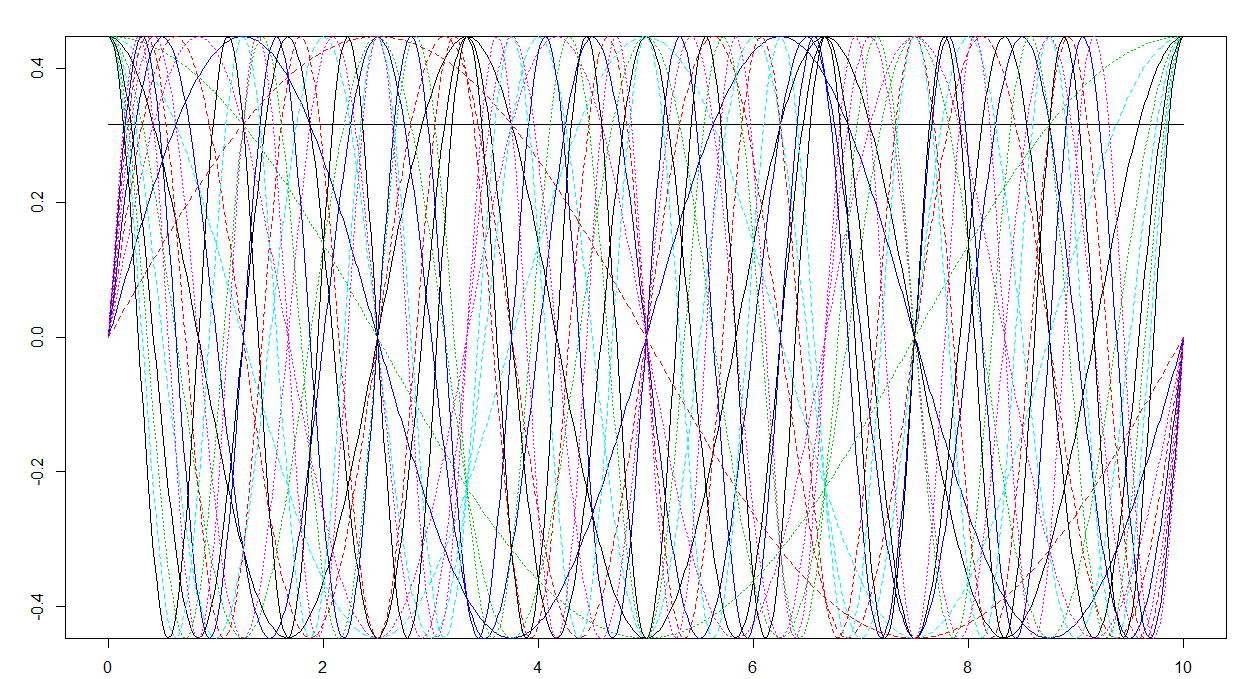 You clearly see that:

Simply scaling the Fourier basis given by fda, so that the usual Fourier basis is obtained, leads to regression coefficients having the expected values:

Let's try fft now: note that since Yper is a periodic sequence, the last point doesn't really add any information (the DFT of a sequence is always periodic). Thus we can discard the last point when computing the FFT. Also, the FFT is just a fast numerical algorithm to compute the DFT, and the DFT of a sequence of real or complex numbers is complex. Thus, we really want the moduluses of the FFT coefficients:

We multiply by $\frac{2}{N-1}$ in order to have the same scaling as with the Fourier basis ${1,\sin{ \omega x},\cos{ \omega x},\dots}$. If we didn't scale, we would still recover the correct frequencies, but the amplitudes would all be scaled by the same factor with respect to what we found before. Let's now plot the fft coefficients: 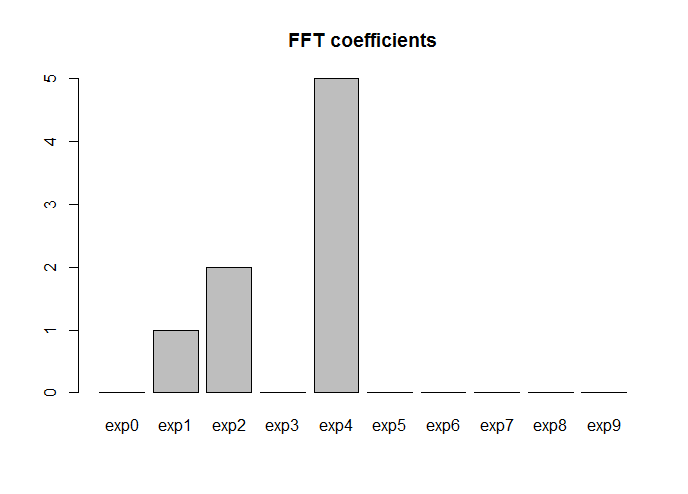 Ok: the frequencies are correct, but note that now the basis functions are not sines and cosines any more (they're complex exponentials $\exp{ni\omega x}$, where with $i$ I denote the imaginary unit). Note also that instead than a set of nonzero frequencies (1,2,3,4) as before, we got a set (1,2,5). The reason is that a term $x_n\exp{ni\omega x}$ in this complex coefficient expansion (thus $x_n$ is complex) corresponds to two real terms $a_n sin(n\omega x)+b_n cos(n\omega x)$ in the trigonometric basis expansion, because of the Euler formula $\exp{ix}=\cos{x}+i\sin{x}$. The modulus of the complex coefficient is equal to the sum in quadrature of the two real coefficients, i.e., $|x_n|=\sqrt{a_n^2+b_n^2}$. As a matter of fact, $5=\sqrt{3^3+4^2}$.

I want to say that the first answer has an overflow error since the second formula for DFT coefficients is infinite when j = N/2 at this value the argumment for sine is π * t making the value zero for all t's. β^2,j=∑Nt=1ytsin(2πt[j/N])∑Nt=1sin2(2πt[j/N]) There are others DFT Data Regressions in published papers out there in google but i've not analyzed them correctly as they are confusing me. Perhaps the author of the first answer may help us as I'm tanglemessed up with this. Thanks in advance

Not the answer you're looking for? Browse other questions tagged fourier-transform functional-data-analysis or ask your own question.

1
Why is spectral density only defined for stationary processes?
2
Pattern Recognition Time Series via FFT
1
Spectral Analysis in R - the periodogram