What's the difference between prior and marginal probabilities?

Let's say I have a distribution for a random variable S:

Alternatively, I could be given a joint distribution for S and R and compute the marginal probabilities:

So the marginals are:

My question is: how is this marginal distribution for S any different than the prior for S? Is it only a matter of interpretation?

Given such table, you can calculate conditional probabilities $P(S \mid R)$, or $P(R \mid S)$ by applying Bayes theorem, e.g.

the same way you could calculate $P(R \mid S)$. Notice that to apply it you need to know either conditional, or joint probabilities. This is a basic application of Bayes theorem and it has many nice applications (see e.g. here).

When applying Bayes theorem in statistics we have some data $X$ that can be described using probability density function $f_\theta$, but we do not know the value of it's parameter $\theta$. To estimate $\theta$ we can use many different statistical approaches, for example, maximum likelihood estimation by maximizing the likelihood function

Other approach to the problem is to include some prior information into the process of estimating the parameter and use a Bayesian approach. This is done by using Bayes theorem, but in a different way. First, we assume some probability distribution for $\theta$, let's call it $g$, and then assume a priori that the unknown parameter follows this distribution. We use Bayes theorem to combine the two sources of information: our a priori assumptions about $\theta$, that is our prior $g$; and the information that is contained in the data, that is likelihood function $f_\theta(X)$, so to obtain posterior estimate $g(\theta | X)$:

If this still sounds complicated, you can start by going through multiple other questions tagged bayesian for lots of examples. There is also many good introductory books to start with, e.g. Bayesian Data Analysis by Andrew Gelman et al, or Doing Bayesian Data Analysis, Second Edition: A Tutorial with R, JAGS, and Stan by John K. Kruschke.

If you think of a table with columns as possible parameter values and with rows as possible data values (see image below), then the lower marginal distribution is the prior distribution on the parameter. The observed data indicate which row of the table is the row we actually live in, so to speak, hence we conditionalize on that row to find p(theta|D), which is the posterior distribution. In other words, Bayes rule gets us from the marginal (i.e., the prior), to the row-conditional (i.e., the posterior). 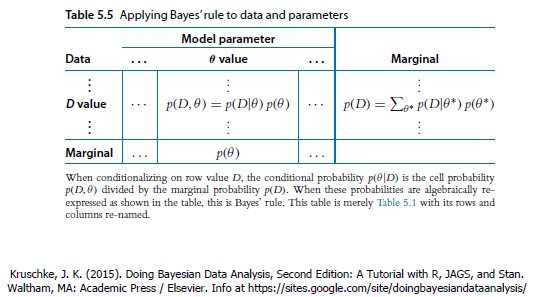 I realize that's a pretty terse description, but I hope it helps some. For full details, please see Chapter 5 of DBDA2E.

Not the answer you're looking for? Browse other questions tagged probability bayesian prior marginal or ask your own question.

4
Is my interpretation of Bayesian probability and inference correct?
4
Interpreting prior and posterior
23
Bayes' Theorem Intuition
1
Strange behavior of Gamma prior in a setting with binomial likelihood
2
How does Dempster-Shafer relate to Machine Learning?
0
Prior/degree of belief/degree of lack-of-information/algorithms/complexity
2
No operational difference between a prior density $f(\theta)$ and $f(x \vert \theta)$?
2
How does Prior Variance Affect Discrepancy between MLE and Posterior Expectation