Please apologize my butchering of statistical lingo :) I have found a couple of questions on here that are related to advertising and click through rates. But none of them helped me very much with my understanding of my hierarchical situation.

There's a related question Are these equivalent representations of the same hierarchical Bayesian model?, but I'm not sure if they actually have a similar problem. Another question Priors for hierarchial Bayesian binomial model goes into detail about hyperpriors, but I'm not able to map their solution to my problem

I have a couple of ads online for a new product. I let the ads run for a couple of days. At that point enough people have clicked on the ads to see which one gets the most clicks. After kicking out all but the one that has the most clicks I let that one run for another couple of days to see how much people actually purchase after clicking on the ad. At that point I know if it was a good idea to run the ads in the first place.

My statistics are very noisy because I don't have a lot of data since I'm only selling a couple of items every day. Therefore it is really hard to estimate how many people buy something after seeing an ad. Only about one in every 150 clicks results in a purchase.

Generally speaking I need to know if I'm losing money on each ad as soon as possible by somehow smoothing the per-ad group statistics with global statistics over all ads.

Could I use the global purchase rate ($ per click) and use it as a prior for $N$ sub-distributions? That would mean that the more data I have for each ad, the more independent the statistics for that ad get. If nobody has clicked on an ad yet, I assume that the global average is appropriate.

Which distribution would I choose for that?

If I have had 20 clicks on A and 4 clicks on B, how can I model that? So far I have figured out that a binomial or Poisson distribution might make sense here:

But what do I do next to actually calculate the purchase_rate | group A. How do I plug two distributions together to make sense for group A (or any other group).

Do I have to fit a model first? I have data that I could use to "train" a model:

I'm looking for a way to estimate the probability of any one of the groups. If a group has only a couple of datapoints I essentially want to fall back to the global average. I know a bit about Bayesian statistics and have read a lot of PDFs of people describing how they model using Bayesian inference and conjugate priors and so on. I think there is a way to do this properly but I can't figure out how to model it correctly.

I would be super happy about hints that help me formulate my problem in a Bayesian way. That would help a lot with finding examples online that I could use to actually implement this.

Thanks so much for responding. I'm beginning to understand more and more little bits about my problem. Thank you! Let me ask a few questions to see if I understand the problem a bit better now:

So I assume the conversions are are distributed as Beta-distributions, and a Beta distribution has two parameters, $a$ and $b$.

In using Jeffreys' prior, I'm assuming that I'm starting at zero and don't know anything about my data. That prior is called "non-informative". As I continue learning about my data, do I update the prior?

As you intuited, a very general way of addressing your question is to construct a hierarchical (multilevel) Bayesian model. The model has three parts, as illustrated below. 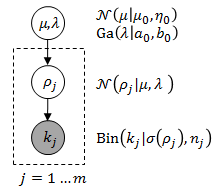 As an example, let's take the data you posted in your original question,

Inverting this model means to obtain posterior distributions for our model parameters. Here, I used a variational Bayes approach to model inversion, which is computationally more efficient than stochastic sampling schemes such as MCMC. I have plotted the results below.

The figure shows three panels. (a) A simple visualization of the example data you provided. The grey bars represent the number of clicks, the black bars show the number of conversions. (b) The resulting posterior distribution over the population mean conversion rate. As we observe more data, this will become more and more precise. (c) Central 95% posterior probability intervals (or credible intervals) of the ad-specific posterior conversion rates.

The last panel illustrates two key features of a Bayesian approach to hierarchical modelling. First, the precision of the posteriors reflects the number of underlying data points. For example, we have relatively many data points for ad C; thus, its posterior is much more precise than the posteriors of the other ads.

Second, ad-specific inferences are informed by knowledge about the population. In other words, ad-specific posteriors are based on data from the entire group, an effect known as shrinking to the population. For example, the posterior mode (black circle) of ad A is much higher than its empirical conversion rate (blue). This is because all other ads have higher posterior modes, and thus we can obtain a better estimate of ground truth by informing our ad-specific estimates by the group mean. The less data we have about a particular ad, the more will its posterior be influenced by data from the other ads.

All of the ideas you described in your original question are accomplished naturally in the above model, illustrating the practical utility of a fully Bayesian setting.

You need to estimate a probability $p$ of a "conversion" (purchase) given a click for each ad. (It sounds like you're assuming that the probability of a conversion is the same for each click, which is reasonable.)

To get the estimate of $p$ out of your estimator with parameters $a, b$, you could choose the maximum likelihood value, the mode of the Beta distribution.

In answer to your edits:

The Bayesian update is

where $x$ is the observation (conversion or no conversion) and $p$ is selected for the appropriate ad. This formula is already worked into the update for $a$ and $b$, which works so that in case of a conversion you add 1 to $a$, otherwise you add 1 to $b$ — this is updating the belief of $p$.

The Jeffreys' prior is not the same thing as the uninformative prior, but I believe that it's better unless you have a good reason to use it. Feel free to ask another question if you want to start a discussion about that.

Not the answer you're looking for? Browse other questions tagged bayesian binomial-distribution multilevel-analysis or ask your own question.

5
Are these equivalent representations of the same hierarchical Bayesian model?
3
Priors for hierarchial Bayesian binomial model